The Metro Peugeot Restaurant Of The Year 2018 is...

To see the 2019 Metro Peugeot Restaurant of the Year winners, click here.

The owners of Sidart and Cassia, Sahrawat and his wife and business partner Chand, were jointly named Restaurateur of the Year, and Sahrawat also won Best Chef for both restaurants. Sidart completed a clean sweep of the top accolades with a win in the Best Fine-Dining category, while Cassia, winner of the Supreme Award in 2017 and 2016, won the Best Smart-Dining category.

Metro editor and head judge Susannah Walker said the unprecedented number of awards was testament to Sahrawat’s unquenchable thirst for perfection, dedication to his craft and attention to detail in every aspect of his restaurants.

“It’s no mean feat that Sidart – now in its 10th year – has reached new heights of excellence. To say that Sid Sahrawat is a brilliant chef is stating the obvious; but his knack for nurturing talent doesn’t get the attention it deserves. It’s one of the reasons he and Chand can run two restaurants at the pinnacle of Auckland’s dining scene.”

The annual Metro Peugeot Restaurant of the Year Awards celebrate the excellence of Auckland’s dining scene. The panel considered more than 100 contenders, refining the list to 50 after months of deliberation. Judges visited restaurants anonymously and paid for their own meals.

The awards were announced by Master of Ceremonies Clarke Gayford at a red-carpet event at Auckland Museum on April 30, which was attended by the city’s most successful restaurateurs.

The Top 50 finalists, announced in April, were considered for category awards as well as the Supreme Winner award.

“We were very impressed by the overall standard not just of the category winners but all of the restaurants which made the Top 50 list,” says Walker. “Once again, they’ve done us proud.”

The new issue of Metro, on sale from Tuesday 1 May, includes the 2018 Top 50 Restaurants guide. 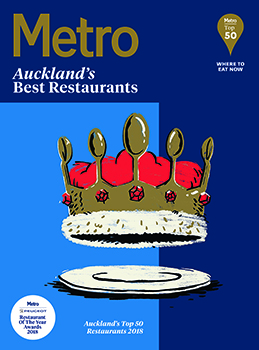 Metro Peugeot Restaurant of the Year 2018

Restaurant Personality of the Year

To see the 2019 Metro Peugeot Restaurant of the Year winners, click here.

The Grill by Sean Connolly