The Best Schools in Auckland

Numbers and insights from the latest Auckland schools data. Presented with thanks to Land Rover.

What makes a good school?

Ultimately, there’s no one answer to this question. When kids — and the parents of those kids — think about what school would be best for them, it’s likely that some combination of all or most of the above will be weighed up in various proportions. Even the most ambitiously academic students will want more to their five high school years than relentlessly studying for exam after exam. And future Silver Ferns and All Blacks will need to know how to do something else after their career ends.

This is where our analysis is limited. The only fair objective measure of the success of schools is their academic results, so that’s what we present here — a comprehensive report of the academic results of Auckland high schools for the year 2019, which is the most recent year fully reported by the Ministry of Education (see page 60 for more detail on our methodology). But we do so by acknowledging that there are limits to this approach, that there are other things that make a good school good (or great even), but that are harder to measure.

With that in mind, this year, we have chosen to present the results in a new format, so that schools can be more readily compared not just in terms of overall achievement, but by specific subjects: you can now get a snapshot of a school’s strengths and weaknesses across various subject types (i.e. 1–6 are humanities, 7–10 are mathematics and sciences, and 11–13 are everything else).

Similarly, this year we have added Top 10 awards across subject areas, so that schools with especially high achievements in Level 1 achievement rates in a particular field can be recognised for their achievements.

To get straight to the results, you can download this pdf. But, first, a few observations… 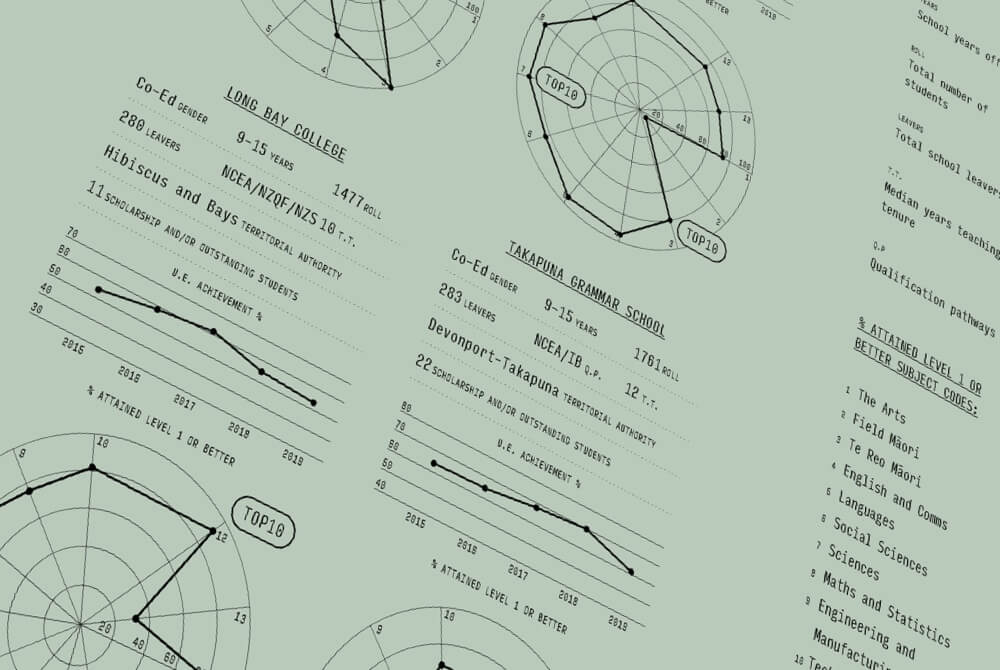 ELITE BUT NOT ELITIST
A school from a lower decile area doing exceptionally well is Te Kura Kaupapa Māori (TKKM) o Hoani Waititi, a decile 3 school with 83% UE achievement in 2019, with eight of the 18 school leavers received scholarships and classed as Outstanding Students, the highest proportion of any school. TKKM o Hoani Waititi made three Top 10 lists: Field Māori, Te Reo Māori and The Arts/Ngā Toi.

A DIFFERENT APPROACH
A markedly different approach to education that is delivering solid results is Vanguard Military School, a decile 3 school on the North Shore for years 11–13. Vanguard made three Top 10 lists: Te Reo Māori, Health/Physical Education and ‘Other’.

2 + 2 = MATHS
In December last year, RNZ reported that scores for New Zealand nine and 13-year-olds fell in both maths and science in the Trends in International Mathematics and Science Study, with the 13-year-olds recording their worst results ever: 482 for maths and 499 for science. This is much lower than comparable countries with similar education systems like Australia and England, where average scores exceeded 500 (the best result was Singapore, which scored higher than 600 in both subjects). Doing their bit for the nation though are, again, single sex girls’ school, which account for five of the Top 10 places for Mathematics (co-ed schools get three places and single sex boys’ schools only two). Decile 7 school Marist College (co-ed) was the top performer in the subject of Mathematics at Level 1.

Thanks to Land Rover

Thanks also to to Symmetry Studio, Head High at South Pacific pictures and the many cold children whose uniforms were appropriated by Jules Armishaw.