Hainanese chicken is the best dish in the universe. To me.

There’s this story I heard on a trip back home to Malaysia that I think about all the time. While away on business, my cousin (in the way that anyone vaguely related to you in Asia is a cousin) decided to get lunch at a random stall tucked away on a busy stretch of hawkers. It sold, he soon found out, the best Hainanese chicken he’d ever eaten. So he ate it every single lunch for the rest of his trip. As the whole table laughed, I remember thinking that it was the closest I’d ever felt to another member of my extended family since moving to New Zealand as a child. The siren-call of Hainanese chicken overcame our cultural barriers. He may be able to speak more than three languages, in the conversational way many people in Malaysia can, I may know only the mother tongue of our British colonisers, but in this — in Hainanese chicken — we were united.

I’ve long theorised that my love affair with Hainanese chicken is written in my DNA. My family on my mum’s side reportedly came from Hainan Island, a small prefecture in southern China where the dish originated. It was called “Wenchang chicken” then. To make it in its earliest variation, our predecessors would have gone to market to pick out a Wenchang chicken, a variety of small chook that’d been fed only coconut and peanut bran and kept in elevated coops. Then they’d poach the whole thing in a vat of boiling water over a fire. Later in Singapore, when it was under Japanese occupation in World War II, the modern version was born out of poor immigrants’ need to eke out as much flavour from the chicken as possible. That was how the former Hainanese servants of the British pushed out of the colony made their money: opening up chicken shops. (Singapore and Malaysia were one country until as recently as 1965. In Singapore, Hainanese chicken has even made it on to the Michelin Guide’s radar: more than nine stalls have stars or are mentioned in the guide.)

When I tried to find out for sure, I hit a dead-end pretty much immediately. Though my kong kong (grandfather) replied to my questions on WhatsApp quickly, he told me he knew he was Hainanese only because his father, Choo Choo Yan, was born in Malacca, where there was a large concentration of people from Hainan. He had no further knowledge of any relatives in the Chinese prefecture. No one still alive even knows the name of Choo Yan’s dad, my grandfather’s grandfather. Our family history is like an elaborate game of Chinese whispers. But everyone in my family believes it, so I believe it, and so it’s true.

Malacca (or Melaka) is in the southern end of Malaysia, to the west. It’s one of those historical towns that all the tourists flock to — rich, intricate lengths of fabric for kebayas (a traditional dress) line the shop windows, brick-red building facades, cobbled pathways with only pedestrians and bikes. Our last name, Choo (朱), means bright red, or cinnabar, the same colour as some of the buildings there. Today, 24% of the people who live in Malacca are Hainan Chinese, so there’s a lot of Hainanese chicken. The famous ones, like Hoe Kee Chicken Rice and Huang Chang Chicken Rice, require waiting in a long line in 35-degree heat — people will often bring umbrellas with them, drooping and wilting despite the shade. We’d pile into these shops, no air-conditioning, just a few pedestal fans spinning weakly two metres from where we’re sitting. It’s primal, humbling, so hot we’d sweat straight into our food. The Hainanese chicken at these shops comes served with tightly compressed rice balls, lumpy and misshapen with a damp stickiness that melts all the chicken broth flavour straight into your tongue. The chicken itself is like a side course. I miss it.

Hainanese chicken exists in different forms across many other cuisines — it’s called Com Ga Hai Nam in Vietnam, for example — and that’s partly why it attracts such ardent lovers and furious defenders. It’s like the Asian version of roast chicken. In some strange way I can never quite put into words, eating it feels restorative: like I’d been drifting off in the wrong direction, then gently turned around the right way. Satisfyingly, every meal always adds another one to this imaginary timeline; my life can be mapped out in a string of chicken.

I search for the best Hainanese chicken in Auckland like Ahab and the whale. I’ve eaten it at nearly every single Malaysian restaurant in the city, some places over a dozen times. When I’m disappointed, I tend not to take it too personally. Hainanese chicken is incredibly hard to get right, and even when you do, it’s hard for a restaurant to get it right every single time. Sometimes the sauce they pour over it is overwhelmingly salty. Sometimes the rice, a vital component of the dish, drowned in chicken stock and garlic, isn’t fragrant enough. Most frustratingly, the chicken is often overcooked, which means you lose that necessary silkiness, rendering it stringy and dry instead. When I complained about this at Bunga Raya (we’re friendly!), the owner told me they purposely overcook it in order to pre-empt complaints about blood oozing from the chicken — Westerners, they say, are a bit squirmy about that. They suggested I call ahead to tell them I was coming so they could, appropriately, not overcook the dish. When they get it right, though, they get it right. It’s my favourite version of the dish in Auckland at the moment. They can absolutely nail that enviable silkiness, shocking the chicken in an ice bath after cooking, helping it stay moist and form a translucent layer of jelly between the chicken and the skin.

I also like the version at Ipoh Malaysian Cuisine in Remuera. The Malaysian city Ipoh is another hot-spot for the dish, but, weirdly, it’s most famous for the beansprouts. In some variations of Hainanese chicken, the meat sits on a springy bed of quickly blanched bean sprouts. The point of difference is in Ipoh’s water, which is apparently mineral-rich thanks to limestone, and produces fat, crunchy bean sprouts. Obviously we don’t have that water here, but you still get a mountain of the stuff at this restaurant, which provides a crucial counterpoint to the other textures.

The chicken rice is also top-notch at Mamarich, the sister restaurant to Selera, one of Auckland’s best-known and best-loved Malaysian spots. It’s the rice here that I really like: oily, with separated grains (not all clumped together), and with a deep hit of chicken flavour, the kind of thing that makes you smack your lips loudly after eating it, your tongue hitting against the roof of your mouth. KL Cafe in Glen Eden also has a worthy version, smooth with a nearly-too-salty soy sauce; if you’re out South (after a trip to Rainbow’s End, maybe?), Yummy Kitchen in Manukau puts out a surprisingly good plate, with a sour chilli sauce.

But, really, it’s Sim’s Kitchen that I frequent the most. I like that at Sim’s I can abide by Malaysia’s more loose social behaviours: when I call across the room to get Aunty Doris’ attention, no one thinks it’s rude. We gossip about other Malaysian restaurants — which chef has moved where, which char kway teow I’ve eaten recently. I like that, and I like the food even more, everything made in-house and from scratch, everything fully embodying the flavours and aromas of the dishes exactly as they should. The side condiments here are something of true beauty, too — pounded sambals and blended chilli sauces.

When I asked Aunty Doris and Uncle Kenny (they are not related to me) for their Hainanese chicken recipe, they relayed it to me as I sat at the restaurant table after demolishing a plate of it. There is a lack of exactness in this recipe — it requires you to “agak-agak”, which is a Malay term that vaguely means to follow your intuition. (For example, if I tell you to add salt to the pot, and you ask, “How much?” I might say, “Ahh, agak-agak, lah.” Or if I say, “Oh, add some garlic to that sauce — agak-agak”, I mean add however much your heart desires.) This way of doing things is the cornerstone of a lot of Malaysian cooking, you’ll find — especially if you’re learning from an elder. 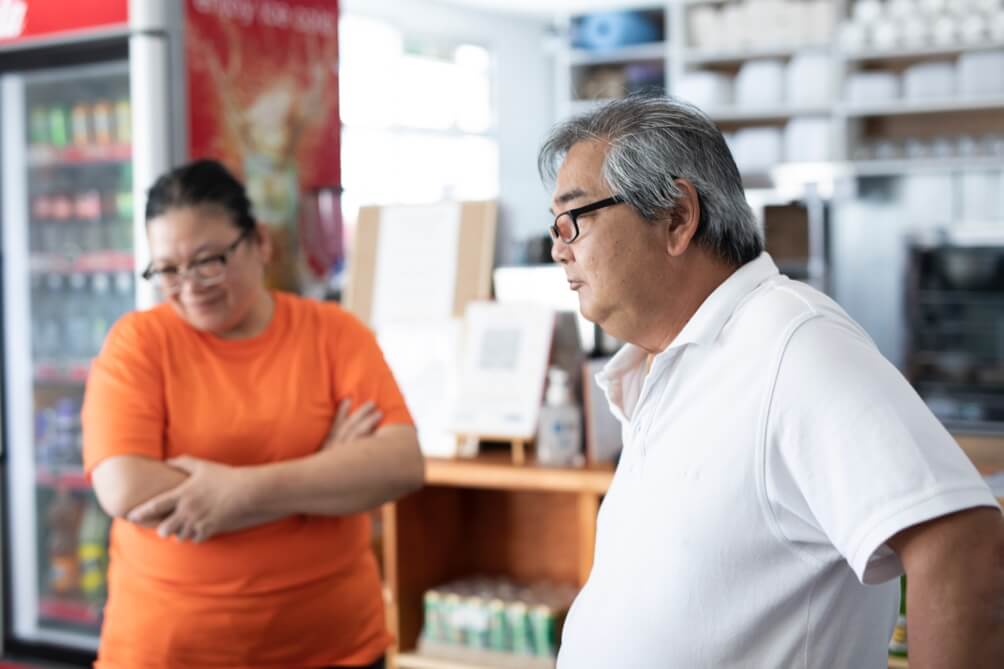 Buy a good portion of a whole chicken leg. Season it by rubbing in salt and topping with spring onion, then keep it in the fridge overnight.

The next day, boil a pot of water with ginger and more spring onion and wait until the water is dancing [boiling]. Put in the chicken, then wait for the water to start dancing again. Once it starts dancing, turn the fire down to a small fire [simmer]. Cover the pot. Wait for about 30–45 minutes depending on the chicken. This is the important part. A lot of people overcook the chicken.

At the same time, prepare a pot of cold water. Sometimes I put ice in it, sometimes I don’t. When the chicken is done, plunge it in the cold water.

For the rice, start by blending ginger, garlic and lemongrass. You can fry this up a little to bring out more flavour. Add it into the rice cooker with your chicken stock.

When you’re ready to serve, chop the chicken up. It will be cold. Ladle the hot spring onion and ginger soup you cooked the chicken in over the top. This will make the chicken soft again.

You can make a sauce for the chicken using soy sauce and sesame oil. It is served with a side of chilli sauce as well — sorry, ours is a secret recipe.

Top with fried garlic. Serve with quickly blanched beansprouts and slices of cucumber.

Food
Back to the Garden
Text by Ila Couch