You never really know what you’re going to get at set-menu restaurant Alta.

There have been 22 menus since Alta first opened in July last year. I know this because I was served lucky number 22, stamped on top of our paper menu. In Chinese culture this is particularly auspicious: good things come in pairs. But the hospitality industry needs a lot more than just luck right now. We got to Alta on a Thursday night, and in the Red traffic light that also meant a quiet night. The awkwardness of empty tables was somewhat smoothed over by a loud (and very good) soundtrack, and the relief that at least we weren’t bumping elbows with any other possible Covid vectors (people).

Alta’s interior has been transformed from previous occupants Clay, though its most recognisable elements (including the colourful mosaic floor and the many fridged bottles of wine from Wine Diamonds) remain. But there’s a cleaned-up courtyard out the back, and with the green banquettes, soft curtains and handsome beige chairs,

Alta is a lot more mysterious and grown-up. That makes sense, considering the food is also a lot more mysterious and grown-up. Honestly, it’s the kind of kai that people who aren’t into this genre of experimental fare may use as fodder to make fun of the whole thing — you know, a server bends at the waist, makes eye contact, and carefully explains all the layers and elements of what’s in front of you, to which you nod back sagely.

I jest, but I love it. It’s a special ritual, a rare treat that I associate with a dinner out somewhere which desperately wants to impress, but does so because they love what they do. Alta has a $80 per person set menu that starts with snacks and goes into entrees, a main and dessert, with optional sides. The vibe reminds me of Rita, in Wellington, and Forest, in Eden Terrace — come into my house, and we’ll feed you. This makes more sense when you know that Alta, like Forest, is the primary vision of one person, head chef and owner Georgia van Prehn, who opened the restaurant after most recently working at Scotch, a wine bar in Blenheim.

I started with an alcohol-free negroni, which was a similar blood-orange colour to the original Campari and emulated the bitter, herby, botanical brew. After I expressed my wonder at real non-alcoholic options, they procured me a little taster of a dill and turmeric ‘orange wine’ that takes after the natural wine’s pickley funkiness. This tuned-in service, attentive but not overbearing, was pitch-perfect.

This was followed by a plate of prosciutto, newly unwrapped after having been dry-aged in house for six months. The thin slices of saltiness were pink and beautiful, paper-delicate and creamy. Then more snacks: a finger of brioche with cream-light parfait and a dusting of bayleaf powder and blackberry; beetroot and spring onion mayo on a linseed cracker; and celtuce with fermented chilli and sunflower seeds. The celtuce, a sliver of crunchy stalk which I’m familiar with as a vege from the Asian supermarket, has a similar flavour profile to celery; a watery bitterness that went well with the chilli, though the sunflower seeds felt like a strange addition, flavour- and texture-wise. But I was incredibly into the beetroot and spring onion mayo, the latter of which tasted like the vegetable in cream form, fragrant and fresh against the nuttiness of linseed.

Then there was an entree that I’ve gone back and forth on a billion times since I ate it: thin slices of raw scorpion fish — a variety I hadn’t eaten before cooked, let alone raw — on a vanilla sauce. Scorpion fish is a thorny, gnarly-looking bottom-dweller that’s known in Aotearoa as the Granddaddy Hapuku. Its spines are venomous. The raw fish was wrapped around smoky bits of fried leek, with the texture of hay, which lent a much-needed earthiness and saved my palate from being overwhelmed by the sauce. On the first bite I had, I fell head over heels for it; it just had something, a combination of flavours that was uncharted territory. But soon, about halfway through, it became too much: the texture of the raw fish, which was gelatinous, turned stringy. Chewing it became a marathon sport.

That palate fatigue appeared again to some extent in the main, a soft hunk of beef cheek that had a sprinkle of red tomato powder on top. If this had been a sharing dish, I’d have been more than okay with it — though I’d need a whole tomato, one of which came on the side, for myself. That’s because that tomato, slowly melting in on itself in a tomato consommé, was utterly delicious, as was the “oyster sauce” that covered it like a blanket (not the usual dark brown condiment, but something salty and satiny).

Alta is greater than the sum of its parts. It’s hard for me to break down each dish and pick it apart individually when, really, the intention of the whole experience is what makes the place so distinct. It essentially reinvents itself every two weeks, so it makes sense that this is reflected in the food — a kind of interesting thrill that this is the first and last time you (or anyone else) may ever eat this dish in the way it’s been put in front of you. You might get better food than I did. Or worse. Who knows? Isn’t that the fun of it? It feels important that Alta’s way of working means that there’s always an inherent sense of wonder no matter how many times you visit it, and that you are served food which deserves to be thought about and really considered for some time after. That’s rare.

We ended the night with a buckwheat mille feuille, the pastry thin and snappy, and a parting gift from the kitchen: a small square of bread with coffee mayonnaise and parmesan on top. “A fancy mousetrap,” our server told us. It was a little gracious nod of hospitality that’s emblematic of the meal you’ll have here: not perfect, but perfect enough that you’re glad to have chosen it over the dozen other more anonymised dining experiences on the Karangahape Rd strip. It’s a restaurant model and ethos that is more than worth supporting. 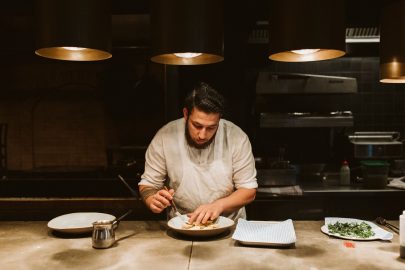