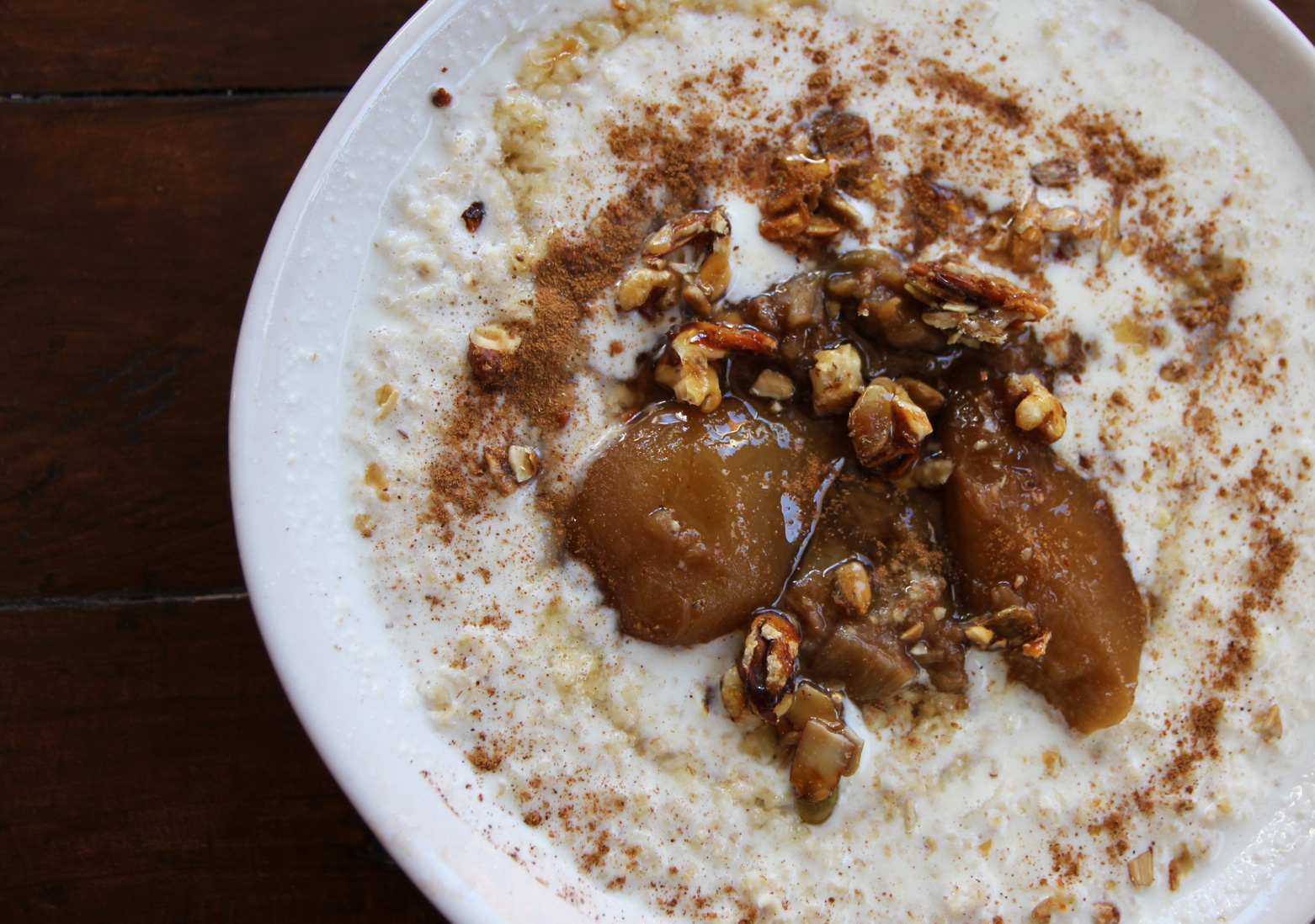 There’s nothing like porridge, fancy or plain, to heat up the cockles. Metro hits the cafes to find the best of the bunch.

We’d cook it in the microwave and eat it with a dollop of bright red supermarket jam. Sometimes we’d get distracted, resulting in a porridge volcano that we’d lazily tackle with paper towels, the bowl left stippled with a dishwasher-averse rim of coagulated oats. God, children are monsters. Monsters that can be cheaply fuelled by hot oats.

I grew up in Yorkshire (which I’m sure instantly clouds this vignette in the mists of Wuthering Heights), but it seems porridge is often associated with bleakness: be that due to the utilitarian nutrition of childhood, Oliver Twist, or arduous washing-up. It’s also one of those dishes people love to say should never be ordered in a cafe. Of course, it’s cheap and easy to make at home, but that’s not the point. In your own kitchen, the baller decision to use cream instead of water, to add that extra deliciousness-making spoonful of syrup, to open a packet of $15 freeze-dried raspberries — that’s on your conscience. So, too, is the unwashed pan as you rush out to work. At a cafe, you can eat dessert for breakfast in ignorant bliss and leave with the literal glow of complex carbohydrates in chore-free peace. Plus, porridge has really upped its game since you last tried it.

For a start, cafes are getting academic with oats. Porridge purists rarely veer from steel-cut oats. They’re revered for being less processed than their rolled siblings, and for their toothsome texture. At Hip Group’s newly opened Britomart bakery, Amano Bakery (68 Tyler St, central city), they’re served simply with whole milk and poached winter fruit. It costs $6, is designed to be taken away in a cardboard container and is everything porridge should be: boiling hot, silky rather than stodgy, and with a generous topping-to-oat ratio. They do a savoury mushroom “porridge”, too, made using carnaroli rice, laced with parmesan and topped with a slow-poached egg. It’s technically breakfast risotto; you’ll know if that’s your kind of thing.

Two types of rice and jumbo rolled oats get along very nicely in a bath of coconut milk at Welcome Eatery (181 Grafton Rd, Grafton). Inspired by traditional Asian congee, Mark McAllister tops his sweet oat fusion with nashi pear, sweet apricot purée and caramelly cashew clusters. If you over-pour the accompanying pear syrup (which I did), fine strands of intense micro-coriander have your back.

Two other Asian-inspired dessert puddings — while technically not porridges — were too good not to mention. Bolaven (597 Mt Eden Rd, Mt Eden) has Malaysian sago pudding, made with sago pearls, coconut milk and sesame seeds and topped with exotic seasonal fruit. It has a totally different mouthfeel to porridge (in northern England, our version is lovingly known as “frog spawn”), but delivers the same inner warmth. Meanwhile, the “Cambodian” — black rice in a moat of salted coconut milk with lychee and kiwifruit – at L’Oeuf (4a Owairaka Ave, Mt Albert) is magically sweet, salty, fragrant and tart, all at once.

And that’s the thing with all porridges, congees and risottos: the trick is to make each mouthful intriguing even though it’s essentially the same. The solution at Beirut (85 Fort St, central city) is shards of baklava that are sometimes chewy and sticky, sometimes flaky and crunchy. They top a sweet soup of freekeh cooked in caramelised milk, fragrant with lavender oil and dotted with edible petals. It’s as pretty as porridge can be, and for such a moreish dish, a steal at $8.

Catroux (129 West End Rd, Westmere) also opt for decorative porridge. Theirs is stained a delicate lilac with one stir, thanks to boysenberry compote and freeze-dried berries. If you like a hearty, thick consistency, their millet/oat mix with optional cream is made for you.

You’ll want to linger at misty-windowed and vine-covered cafe Mondays (503b New North Rd, Kingsland) in winter. It looks like a house from a fairytale, which makes it the perfect setting for porridge that is, IMO, just right. That’s exactly what a millennial Goldilocks would say, in addition to, “Sorry, are there any gluten- or dairy-free options available?”, which indeed there are. To my surprise, cashew milk and rice flake porridge is incredibly tasty, especially as prepared by chef Hannah Horton, who tops it with braised seasonal fruit (pear and rhubarb on my visit), crunchy walnuts and vanilla syrup. As I departed, it shot to the top of my list, due to my feeling the right kind of full: glowing but not sweating, to put it gracefully. It’s 100 per cent worth getting up in the dark for on a winter’s morning before work, and — our parents were right — you’ll be full until lunch.