Why I’m voting to change the flag 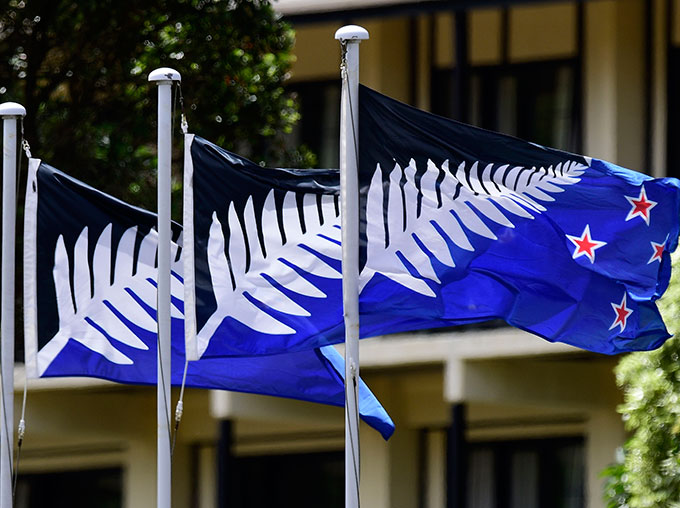 The flag referendum should be a vote on whether we take a step forward as an independent, liberal democracy. It still could be.

This is where I start. We have a flag that carries a symbol of the old colonial country – the Union Jack – and I think we should take the first chance we get, which happens to be now, to chuck it out.

Anyone else remember when we were supposed to stand while they played “God Save the Queen” in picture theatres? Anyone else remember how that ended? In a mild but decisive act of civil disobedience, people just stopped doing it. The independent Kiwi spirit. What happened to that?

Even earlier, the poet Allen Curnow had written, “Not I, some child, born in a marvellous year, will learn the trick of standing upright here,” and Douglas Lilburn, long before Don McGlashan, had set it to music. Our national character, we like to think, is a humble but chaotic mix of pioneering women’s suffrage, fearless announcements about knocking the bastard off, outrageous sporting talent and the raw genius that splits atoms and wins Academy Awards.

It runs very deep. We work out how to do things our way, and we do it so we can make things better. Maori, in the Land Wars, pioneered guerrilla warfare. Much later, we found a way to interpret the Treaty of Waitangi that would allow us to evolve as a nation on the basis of justice and respect between peoples. Yes, it has been difficult to make the promise come true, but did anyone expect otherwise? We grasp the nettle. On the whole we do not flinch from that, and we should be proud of it.

We have led Britain and the world, not just on issues of gender and race, but in industrial relations law, the welfare state, our nuclear-free status, important parts of our education system, no-fault accident compensation, family courts. We’re truly great at rugby and we’ve even been to football’s World Cup. Twice.

The thing every New Zealander curious about going into the world learns is that Kiwis do well because we are independent, resourceful and above all unbowed by the weight of class and colonial expectation. We don’t know our place. It’s a good thing.

For two generations now, we have believed we are the children Curnow foretold, born of Kate Sheppard and Ed Hillary, the ones who have learned the trick of standing upright in our own country. We believe this so deeply, we’re smug about it.

We’re not as good as we like to think at seeing the bigger picture – now that we have a longed-for chance to remove that Union Jack from our flag, we have let other things confuse the issue.

But we shouldn’t be. There’s another side to being a New Zealander. Despite Hillary, we can be dull and conformist. Despite a long roll of honour from Sheppard to Helen Clark, and beyond, men are made uncomfortable when women learn that same trick of independence.

We’re not as good as we like to think at seeing the bigger picture. Commodity dairy products will do us nicely, thanks. And now that we have a longed-for chance to remove that Union Jack from our flag, we have let other things confuse the issue.

We have a prime minister whose defining attitude to most matters of culture, identity and the way we make our society work has been to shrug and say, “Yeah, nah.” We criticise him for it, but it has seeped into our bones. It pervades everything we do.

John Key may be thinking, so this is what it means when they say you reap what you sow. Because it turns out “Yeah, nah” is how New Zealand thinks about the referendum on the flag.

THE ARGUMENTS AGAINST CHANGING THE FLAG

Perhaps it shouldn’t be a surprise. After all, we treat one of the founding myths of our modern nation, the Gallipoli story, as an exercise in colonial loyalty, bravery and comradeship, and not much else. Yet while it certainly was all of those things, it was also the moment when our soldiers were sent pointlessly to their deaths, in the name of an imperial adventure we should not have been part of. We honour the soldiers but we have not, in the way we honour them, shown that we have learned from their sacrifice.

And yet, we do also honour our bicultural founding. We do admire the spirit of Curnow and all the other pioneers of our modern cultural life. We strive today to be as comfortable in Asia as we have long been in Europe. So why, really, are we shrugging our shoulders about the flag?

People who once were keen to see the Union Jack gone, but will not vote for that now, give several reasons for their decision.

It’s so unfortunate that John Key has politicised the flag process. But at least he has been consistent. Key has always been in favour of changing the flag, he said he would abide by the process and he has. He actively supports the chosen alternative even though it was not his personal choice.

But the leaders of Labour and the Greens have also politicised the process, and they have done so hypocritically. They used to favour change. So did most of their MPs, and so did most members of their parties.

The reason – the only reason – they oppose change now is that John Key supports it, and they think they can use it as a weapon against him. I understand the temptation: this is likely to be the only high-profile national issue on which the centre-left has defeated John Key since 2008. They’re desperate and they’ve seized their chance. They want some bragging rights.

Key, presumably, has been happy to politicise the debate because it allows him to make his opponents look like cynical opportunists. And they have fallen for it.

But what will they brag about? Key, presumably, has been happy to politicise the debate because it allows him to make his opponents look like cynical opportunists. And they have fallen for it.

He will lose nothing from this debacle, because he has been consistent. For the centre-left, however, the old flag will become the symbol of two things: their failure to stand on the side of progress, and their willingness to abandon their own beliefs and principles. Neither will do them any good at all.

Yet it could have been very different. If they had been true to themselves and supported change, the flag referendum would have risen above politics. We would be voting on what the flag stands for, not on who supports it.

What’s the referendum been reduced to? The ego of the party leaders.

Democracy costs money. What’s next: cut the number of MPs in half? Abolish the Court of Appeal? Of course we shouldn’t waste money, and of course there are many worthy causes struggling for the lack of money. But decisions on constitutional and democratic processes should be decided on their intrinsic merits, not their cost. It’s good we have a robust democracy and it’s not a problem that we spend money on it.

3. The process has been wrong

Or perhaps we should have left it to Parliament, as many other countries that change their flag have done? Or perhaps all it really needed was to have a panel with demonstrably more wit and imagination than the one we got. But what would be the true measure of that, beyond the hope that they would think more like me, or you, or whoever is doing the criticising?

Actually, the best way to get a genuinely outstanding piece of aesthetic design would have been to decide the whole thing completely undemocratically. Just appoint three people with very good taste to make the decision. Most of us would not have liked what they chose, possibly for many years, but eventually we would come to love it. But is that a good way to choose a flag?

The fact is, the process is always wrong. Democracy is an imperfect system, but it’s better than the rest. History is a dirty, compromised and ongoing process, but that’s how progress happens. The flag referendum gives us a chance to take a step along the way.

I don’t like the new flag much myself. I would have liked a koru, but the one the panel selected was probably the worst koru I’ve ever seen. I would have really liked a Gordon Walters koru, but it did not happen.

And it’s not important, not now. Because the option we’ve got has been democratically selected. It’s not what I wanted, but it is what we wanted.

What were the chances that any one of us would get a flag design that was exactly what we wanted? Not high.

If you’re waiting for a flag design that you and a majority of others really like, you will probably be waiting forever.

Ideal choices don’t exist. We don’t vote in general elections for the ideal party, or we’d never have a government. We vote, on the balance of likely outcomes, for the choice we prefer.

If you want to keep the colonial symbol of the Union Jack on our flag, by all means vote for the old flag. You would be true to yourself. But if you want it gone, voting for the new flag is the only way on offer to help make that happen.

There’s no rule that says we’ll be stuck with anything forever. I reckon there’s an odds-on chance that 10 years into the reign of a doltish King Charles III, republicanism for NZ will be looking very attractive. And at that point, we might well want to change not just our head of state, but our anthem, our flag and – the big prize – the name of our country.

Of course – thought experiment time – if John Key was still around and introduced the bill himself, would it fail because too many republicans on the left refused to support him, even on that?

But let’s assume he won’t be around for quite that long. Will having a new flag now hasten or delay the bigger constitutional debate?

It will hasten it, because this vote is a marker for us. If we discover ourselves to be a people who can vote for a symbolic change like this, it will unlock something in our aspirations and imaginations. And yet, because it is a small and relatively simple test, failure will make us so much more reluctant to try again.

In many ways that are important to us, it doesn’t matter. No child will be brought out of poverty because we change the flag. It will not cause anyone to write a better novel or score a better try.

But the referendum does ask us this. Are we really the children of Kate Sheppard and Ed Hillary, proud to have learned the trick of standing upright here? Or have we become the “Yeah, nah” people?

After this election, our flag will be the symbol of our answer.

And yes, it is a deep, deep irony that John Key is not on the “Yeah, nah” side. But he isn’t. And that’s not a good reason anyone else should be.