Stepping up: What can we expect from Bill English? 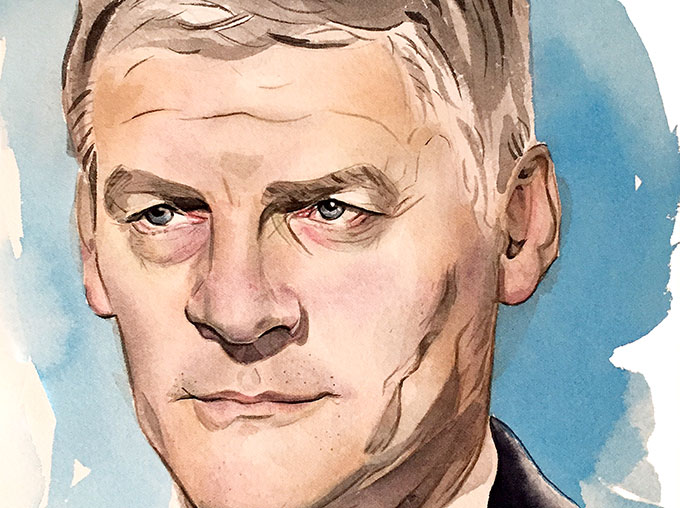 Bill English’s intelligence and thoughtfulness are exactly the qualities that might make him a poor prime minister.

John Key’s idea was we would all get comfortable with our new prime minister over the summer.

Like everything else in his business and political career, the timing of the former prime minister’s departure was impeccable. On the one hand, the economic and fiscal forecasts are the best they have been since he took office in the midst of the Cullen recession and the global financial crisis in 2008. Just as he promised back then, he can say he has balanced the government’s books and turned around migration from an outflow of New Zealanders to an inflow. Wages, GDP, employment, productivity, prices and every other economic indicator are now expected to head in the right direction in election year and through to the end of the Treasury’s five-year forecasting range.

On the other hand, Key knew that his political prospects now had only one way to go and that was sharply down. Whereas in his first two terms his poll ratings were higher than National’s and dragged his party up, he personally sat below 40 percent for much of 2016, while National remained well above. His approval ratings, which were once as high as a US president immediately after a successful war, were by his third term a little below where Helen Clark was at the same time in her prime ministership and his disapproval ratings a little higher. Worse, the more detailed research indicated that where once Key had been overwhelmingly regarded as “charismatic,” “honest” and “personable”, by 2016 the concepts most commonly associated with him among swing voters were “arrogant,” “smarmy” and “smug.” Any trader could see it was time to close the position.

– Bill English as PM: Roll up, roll up to see the new-ish ringmaster

– Tales from the trenches: How Bill English reacted in a tricky moment

The precise timing beautifully overshadowed National’s disaster in the Mt Roskill by-election (remember that?) and ensured the government would dominate the news right up until Christmas. Key’s plan was that as we tuck into the turkey, finish the last of the ham and sit around drinking in the sun, Aunt Mabel will ask “so, what about that Bill English then?”

The new prime minister takes office with low expectations. If the mythological Key could effortlessly create Adele-like scenes at LynnMall or Sylvia Park, English is assumed likely to drop the baby and be photobombed in every selfie. At least in public, Key could remain affable despite any provocation. English, at least until recently, has been known to display an explosive temper and an extensive Anglo-Saxon vocabulary. Asked, say, whether joblessness is going up or down, Key could be relied upon to declare more New Zealanders are in work than ever before. English might muse that it depends how you measure it.

In fact, English can be every bit as engaging in person as Key and ultimately more satisfying conversationally. He is by far the more intellectually curious. He is indeed the bumpkin Dipton farmer but also the St Patrick’s College head boy and the young man who decided to study literature at Victoria University after finishing his commerce degree at Otago. English has read Derrida and Foucault and can say why he rejects both. If called upon to send young New Zealanders to war, English will reflect on Brooke and Sassoon. Key is more a John Grisham man.

The key to understanding English’s political outlook is that he became involved in the National Party and stood for parliament in 1990 not because he was enthusiastic about Jim Bolger, Ruth Richardson and Bill Birch’s economic programme but because he was opposed to the shock and awe of David Lange and Roger Douglas. The benefit cuts and the Mother of All Budgets – both of which he voted for – were deeply traumatic for the new MP. Had he not been so tribally National, personally conservative and deeply ambitious, he might have followed the likes of other new backbenchers such as Michael Laws into the political wilderness. Instead, he became the leader of the so-called “brat pack” that expressed their opposition more privately and with the occasional subtle public dig.

Nearly a quarter century later, English is completely intellectually reconciled to the power of free markets and open borders to most efficiently allocate resources and raise living standards but he continues to regard shock-and-awe approaches as both morally reprehensible and bad politics. For the new prime minister, acting slowly and carefully is not a cynical political calculation but a principled approach to implementing policy in a democracy. He does not believe in hurting people in the short term to deliver a longer term benefit. To the contrary, his much-heralded social investment approach to government spending is about helping people early to avoid problems down the track. It remains to be seen if it is in fact anything more than a technocratic attempt to build algorithms around the same “as the twig is bent, so grows the tree” principle that has always guided social policy ministers.

English adores his family, both his nuclear family and the wider whanau. His enemies, not without some cause, have portrayed his wife Mary as a Lady MacBeth. Both are staunch Catholics but, in Bill’s case, more torturedly so. He has spoken about struggling with faith and his theology can perhaps be seen as more Pope Francis than Benedict XVI. He regards abortion as in a sense murder but understands the contemporary context. There will be no suggestion of reversing the status quo (or, of course, of reforming New Zealand’s bizarre existing laws). Similarly, he was opposed to gay marriage but has no intention of going back. He is unwilling to argue against love.

Quoting Fitzgerald, English would be able to tell us that “the test of a first-rate intelligence is the ability to hold two opposed ideas in mind at the same time and still retain the ability to function” and he undoubtedly can. The doubt about him is whether or not he has the temperament to choose one difficult idea over the other when that is necessary. The only decisions that ever reach the prime minister’s desk are those where there is no clear answer and no further data will help. Do you settle the teachers’ strike when they are making unreasonable demands (as half the cabinet wants) or tolerate another week of strikes (as the other half of cabinet insists)? Do you sack the District Health Board for financial mismanagement even though all its National-aligned members have just been re-elected and the health status of the region’s population is improving faster than elsewhere? Do you send the SAS to Afghanistan even though it won’t do much good, some of them will be killed but the deployment will help cement the alliance with Australia and the “very, very, very close friendship” with the United States? Do you cut the company tax rate to maintain in touch with Australia (as your business supporters demand), increase family tax credits (as the polls insist) or use the whole surplus to pay back debt (which you know is probably the best choice)?

English’s problem is that what can be admired in a scholar as the ability to consider all sides of an argument can be derided in a leader as dithering, weakness and drift. It is what destroyed English 1.0 in 2002. The early signs of whether English 2.0 has been sufficiently upgraded are not encouraging. His uninspiring choice as Finance Minister, Steven Joyce, took it upon himself to go on TVNZ’s Q&A even prior to English’s ascension to announce a comprehensive policy review, surely the prerogative of the new prime minister. Key’s Foreign Minister, Murray McCully, felt free to announce he was off to New York for a week the day English was sworn in. The subsequent rejig of the cabinet failed to put an English stamp fully on the new government. If he continues down this path, his government will soon be seen as temporary. His one hope for re-election will be that Andrew Little is worse.