How the unleashed power of technology has radically changed U.S ideals

These Truths is a noble attempt to counter the collective attention-deficit syndrome Zuckerberg and his pals have created in all of us.

Mark Zuckerberg’s appearance in April before the United States Congress, to explain Facebook’s role in the Cambridge Analytica scandal, was a watershed moment in the internet age — the first time one of contemporary tech’s titans was forced to defend the pernicious forces they’d collectively unleashed. But it was also a moment that may, according to historian Jill Lepore, have been longer in coming than many of us think.

About two-thirds of the way through her new book, These Truths: A History of the United States — an epic, 900-page narrative biography of the world’s most powerful nation — Lepore writes that “Hiroshima marked the beginning of a new and differently unstable political era, in which technological change wildly outpaced the human capacity for moral reckoning. It wasn’t only the bomb, and the devastation it wreaked. It was the computers whose development had made dropping the bomb possible. And it was the force of technological change itself, a political power unchecked by an 18th-century constitution and unfathomed by a 19th-century faith in progress.”

The decimation of two Japanese cities, in Lepore’s formulation, marked the beginning of a revolution that, in 2018, has brought American democracy to the brink: computational power’s ability to think quicker than us and turn us all into data — fragments of information that can be mapped, manipulated and fundamentally reshaped.

“Our system of government isn’t designed for that speed,” she tells me. “It’s like we have a rocket engine on top of a tricycle, and we’re trying to not fall off while it’s careening all over the place. No wonder we’re dizzy all the time and our knees are all scraped up.”

Lepore, a professor of history at Harvard and a staff writer at the New Yorker, is one of America’s greatest observers, whose work is always marked by elegance, wit, and extraordinary historical acuity. These Truths is her most ambitious expression of this to date, a book named after three ideas so fundamental to the American Experiment that Thomas Jefferson described them as “these truths” — political equality, natural rights, and the sovereignty of the people.

And yet right from the start, Lepore points out, these “truths” were undermined by America’s original sin: slavery. It supercharged American capitalism; it tore the country in two; and it left open wounds that are far from healed — and in fact, have opened up even more since the brief promise of the Barack Obama era.

Lepore says that although there’s been a huge surge of research about African-American history over the past 50 years, “that scholarship has been largely segregated, frankly, from what is considered the main story of American history — which is the rise of American democracy and America’s global reach into the world. I wanted to give it my best shot to write an integrated account that put those two stories alongside one another. In fact, they’re driving each other. There’s a causal relationship, and they’re constantly in tension with one another, forcing changes. Slavery was an economic system but it was also a political system, and it transformed American politics.” 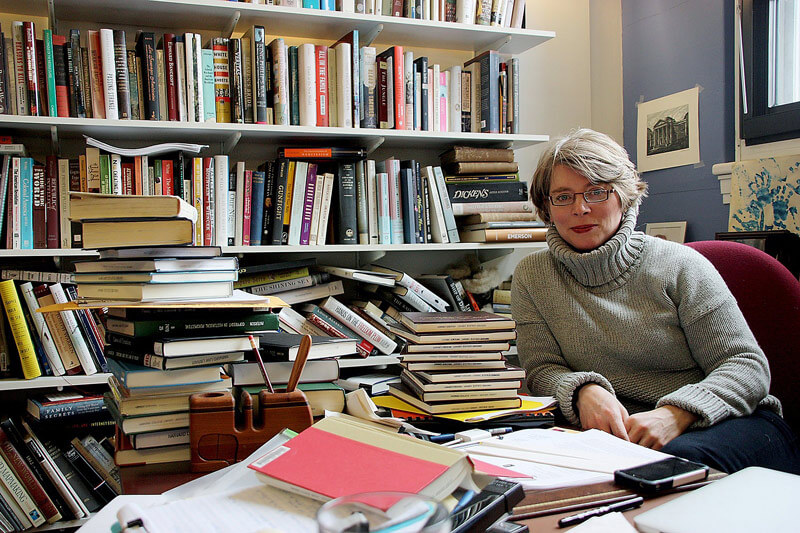 Lepore’s ability to write sentences that can flip your heart inside out simultaneously sets her apart from most historians and aligns her with some of the heroes of her American story: the great orators and writers who have shaped American language, and, in a country literally created by the words of a constitution, shaped its civic and cultural identity. There are the great early rhetoricians Benjamin Franklin, Jefferson, Abraham Lincoln and Frederick Douglass; the transcendentalist writers Ralph Waldo Emerson and Henry David Thoreau; African-American icons including W.E.B. Du Bois, Martin Luther King, Langston Hughes, Stokely Carmichael and Malcolm X; and masters of modern presidential communication like FDR, JFK, Bill Clinton and Obama.

But Lepore also makes a concerted effort to insert women’s voices back into the heart of things. She describes the 19th-century journalist and women’s rights campaigner Margaret Fuller, who died tragically early, as “the most accomplished woman of the century”. Then there’s the equally remarkable 20th-century journalist Dorothy Thompson, who anticipated the democratic dangers of mass communication as soon as radio spread its waves across the nation. She doesn’t hide the bad apples either. The extraordinary Mary Lease may have been a key figure in the suffrage movement, but she was also a white supremacist.

And what we now understand to be the hard edge of modern American conservatism was deeply shaped by political powerhouse Phyllis Schlafly, who fought the Equal Rights Amendment and 1970s feminism tooth and nail.

This is not, then, a simplistic liberal history that lauds America’s silver-tongued freedom fighters while sneering at its conservatives, because that would only tell half the story of how we’ve ended up in our current mess.

“There are plenty of people who said incredibly ugly, terrifying, odious things,” Lepore says. “It’s important to hear that, because there’s still people doing that, and they have an intellectual history, too… A lot of these people haven’t really had their place on the stage in the great pageant of American history as it’s told, for reasons that are not dissimilar to some of the problems in our politics today, where we just don’t pay enough attention to populists, or don’t take seriously evangelicals and the fervour of their political ideas.”

These Truths is ultimately a political history; an account of the fight for rights, and power. And the most important battleground for this isn’t the office of the presidency, but the Supreme Court. President Donald Trump has been given the rare gift of two Supreme Court appointments in his first term. The day Metro spoke to Lepore, Trump’s nominee Brett Kavanaugh was appearing at Senate confirmation hearings. A week later, her New Yorker colleagues Ronan Farrow and Jane Mayer published the story of a woman alleging Kavanaugh had sexually assaulted her 30 years earlier, later identified as psychologist Dr Christine Blasey Ford.

“The Supreme Court has quite a bit more power as a branch of government now than it was meant to have,” Lepore says. “And that’s both good and bad. The main way its role expanded in the 20th century was as a rights-granting body. That expansion of the court’s role was vital for delivering full citizenship, and granting rights to all sorts of people. But there’s been a big counter-reaction since then. And since the court has assumed all these greater powers, now rights can be stripped away by that same court, because those rights don’t have the status of having actually been granted in the Constitution. So I was trying to make sure people understood why the Kavanaugh thing is such a big deal.”

One of the book’s most illuminating passages is Lepore’s forensic and fascinating unpacking of the connections that have emerged from the 1960s to now, between the Supreme Court, constitutional “originalism” (best represented by the late conservative judge Antonin Scalia), anti-feminism and the New Right — and how the judgment in Roe v Wade brought a new group into the conservative Republican sphere: evangelicals. This is why Trump’s being able to stack the Supreme Court’s benches is so dangerous — because there is a very real possibility that the reproductive and abortion rights granted in Roe could be repealed.

It was, Lepore says, “kind of revelatory to me to take [evangelicals] seriously as a political force. I was driven to do so because, as a historian, that was the fair thing to do, but I was also thinking about our contemporary politics here in the US, and the weird schismatic role that Christian evangelicalism plays, and the general contempt for it on the part of elites. I wasn’t going to submit to that; I was going to try to take these people on their own terms and not just dismiss them.”

The ability of conservatives to twist the Second Amendment — a weird little constitutional clause about the right to form militias — into a belief in the right of all Americans to bear arms is also, in Lepore’s telling, a linguistic sleight of hand that has had devastating political consequences. Since the Reagan era, abortion and gun rights have been the defining dividing lines between left and right — and American politics, she argues, have been harder and more hateful ever since. 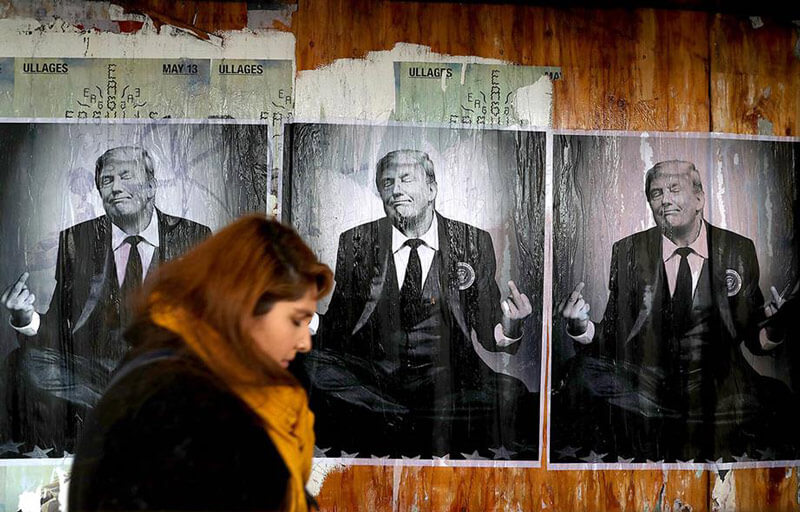 Running as a parallel track alongside her detailed, absurdly readable account of modern American politics is the technological acceleration that took us in less than 70 years from the radio to that rocket on the trike: the internet. Lepore leaves us in no doubt that mass communication in the digital age has become a tool for atomisation, an erosion of faith in facts, and the propagation of the belief that the “liberal media” has it in for conservatives. Enter, then, Donald Trump, in 2016 — the presidential manifestation of strands that Lepore shows have deep roots in America’s past: populism, fake news, tribalism, isolationism, racism, oligarchic capitalism, and political hatred.

Reading the book, I couldn’t help wondering whether Trump was just America’s chickens coming home to roost. It was also weirdly reassuring to see that reactionary politics and populism are cyclical features of American life. So I asked Lepore if she believed the risk was of a different magnitude right now, or if the current state of play is just a grim reminder of America’s ugliest truths.

“I think the republic is in pretty significant danger,” she says. “This republic is tied to others in a deeper way than during previous crises. If a different side had won the Civil War, it wouldn’t really have affected New Zealand. But we’re all tethered to one another. So it does feel awfully perilous to me.”

She says that the politics of hate, on the face of things, “seems to me fixable. Except that what happened is that division was automated, as a machine-based process. When you have automated polarisation, how do you undo that? It’s harder for people to stop. It’s like a runaway train; that’s how it feels to me. That’s the part that worries me — the Facebook problem, the Twitter problem.”

In other words, Zuckerberg and his pals. These Truths is a noble attempt to counter the collective attention-deficit syndrome they’ve created in all of us, by making long-view sense of everything from how libertarians and evangelicals became allies, to why Americans love guns but hate socialised healthcare, to why race is still America’s defining contradiction, and how polling, PR spin and technology changed democracy in ways the nation’s founding fathers never imagined. But most importantly, it’s an invitation to slow down and look not just at where America is, but how the hell it could have got there.

“The world we live in has a flatness and superficiality that’s unprecedented,” Lepore says. “The thickness of an iPhone screen is about as deep as you think about most things on any given day. I include myself in that. We live in that world and it’s just getting thinner, and thinner, and thinner, and I wanted to offer something that had a depth to it. I know it’s long — but that’s pretty much the point. If you want to understand what’s going on, the latest tweet is not what you need. You need the 900-page book. That’s my hope.”

This article was first published in the November – December 2018 issue of Metro.