There they sat, Bill Ralston and Mike Lee, side by side like a couple of grizzly bears in suits. Both chasing the single Waitemata seat on the governing body of council, waiting through a long meet-the-candidates evening in Parnell while a dozen hopefuls for the local board all got to have their say first.

Most contenders for public office make a show of warmth and fellow feeling when they share a stage with their rivals. They want us to know they’re the good guys. Not these two. No jokes. Not even small talk. They sat stiff, silent and glassy-eyed, not quite touching, never once sharing even a glance. It was as if each was struggling manfully with a powerful urge to get up and whack the other.

Men in their 60s, eh. They think everyone else is a fool.

Ralston had an extra shirt button undone. Lee had accessories.

Mike Lee was wearing, as he always does, the uniform of a trade unionist: black suit with white shirt. Bill Ralston, previously known to favour sports jackets and jeans, also wore a black suit with white shirt. Their personalities shone regardless. Ralston had an extra shirt button undone. Lee had accessories: a poppy button to commemorate the Battle of the Somme, a white handkerchief triangle, cufflinks and proper fold-over cuffs.

Finally it was the Punch and Punch Show. (There is a third candidate for the seat, Rob Thomas – no relation to mayoral ex-hopeful Mark – who was also there, and also spoke several times, but it was never going to be about him.)

Ralston started his speech with avuncular informality: we all know Bill, he’s the guy we want to have a drink with. He declared his political alignment: “I call myself centre-right simply because I’m not centre-left”. He said he’d “been endorsed by Auckland Future”, which is the National Party’s main front organisation in this election (although it doesn’t say so).

Lee, when it was his turn, began on a formal note, bidding a sonorous “good evening” to the audience and acknowledging all the elected officials in the room, many of whom he named. He mentioned his experience as chair of the Auckland Regional Council and his six years as a councillor, and said, “It has been a great honour for me. I am proud to serve.”

It wasn’t just throat-clearing. Lee’s been serving much of his life and he wanted to highlight that this is Ralston’s first go at it, because being a media consultant for the National Party and various corporates doesn’t really count.

Later on Ralston, perhaps for the benefit of those who can’t work out why Ponsonby’s favourite bon vivant wants to fill his life with interminable committee meetings, revealed that it’s not about the money. He told the meeting he’d be taking a pay cut to do the job. The salary is $105,800.

He wants to see his kids buy a home without him having to die first.

Lee is endorsed by City Vision, an organisation set up by the Labour and Green parties (which they openly acknowledge in their publicity). He’s old left: a class warrior and proud of it.

Ralston mentioned the word “vision”, and seemed for a moment almost apologetic, but then he eased into an impressively agreeable way of presenting it. He wants to be able to drive across the city without getting stuck, see his kids buy a home without him having to die first, and have Auckland “stand on its own two feet” to fund the necessary infrastructure.

Lee talked about the “catastrophe” of Auckland losing its trams in the 1950s and the surging popularity of rail today. His big play was rail to the airport.

Electrification, he explained, has been a great success for Auckland rail, but “in order for it to work we have to complete the network”. Connecting to the airport is “absolutely critical”: it handles 17 million passengers per year and within 10 years that number will double. “Relying on roads, like the government is doing, is head in the sand.”

He raised his voice, fiercely. “I’m going to fight this. If I’m re-elected I’m going to lead the fight.”

No one pursues the public good with such declaratory bushy-browed anger as Mike Lee.

Ralston also supports rail to the airport and also has bushy brows, but he wasn’t promising to “lead the fight” on this or anything else. Both tend to favour the route through Onehunga. 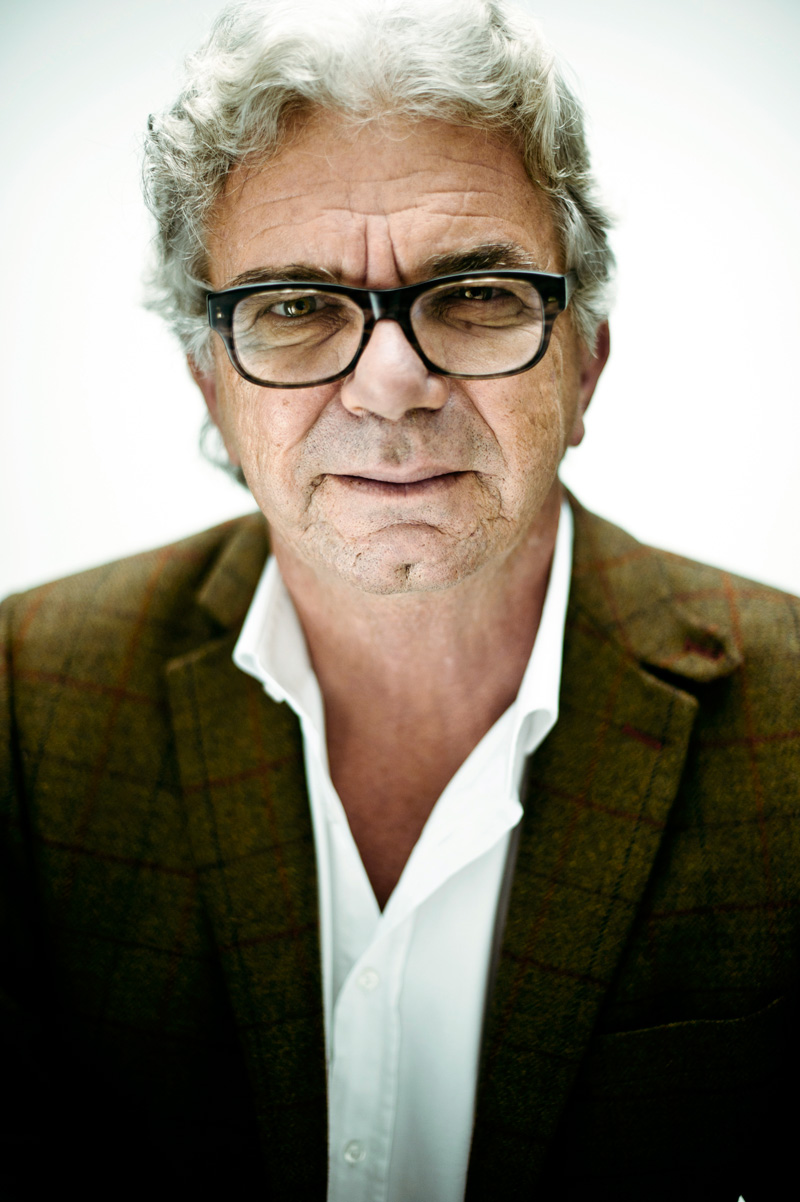 WHEN LEE SPOKE, Ralston sat with his arms folded staring at the ceiling. When it was Ralston, Lee leaned forward on his chair with his hands pressed between his knees, staring at the table.

Ralston said he had “no problem with the Unitary Plan”, although they would need to be vigilant about historic and heritage buildings. He can sound so full of common sense, and then something happens and he gets all wild and woolly.

“We can’t continue to borrow and rack up rates 10 per cent every year!” he pronounced shortly after, although no one thinks we can and that’s not what happens now. Rates rose 2.4 per cent in the current budget.

Lee has a thousand problems with the Unitary Plan. He voted against more parts of it than any other councillor – by a big margin – and has continued to argue that it represents a “neoliberal” plot to enrich developers without helping resolve the housing crisis. He told the meeting, “I don’t know how realistic a compact city is.”

He told the meeting, “I don’t know how realistic a compact city is.”

But both were scornful of land bankers – especially, in their ward, the landowners who have car yards blocking development in Newmarket and on Great North Rd. Ralston wanted to incentivise them to move: “Use the carrot before the stick.” Lee did too.

Both gave a glimpse of their generous side: Ralston found something to praise centre-left mayoral frontrunner Phil Goff about; Lee praised outgoing mayor Len Brown, who has basically been his mortal foe these last six years.

They both attacked the council for wasting money. Lee said it spends “far too much on itself and not enough on the city”. He added, “There are too many staff in [the new council building] and not enough out fixing the roads.”

Ralston asked, referring the building’s $30 million repair-cost shock, “Where is the accountability of [CEO] Stephen Town? How can they not do due diligence on their own building?” Both criticised the council’s expensive IT system.

In reply to a question from the floor, Lee attacked a Waitangi Treaty settlement relating to land on Gladstone Rd which has been given by the Crown to the Marutuahu iwi from Coromandel Peninsula. “We all know who the mana whenua of Parnell are,” he growled. “And it’s Ngati Whatua.” He wondered if there was “tribal score settling” going on.

Ralston demanded that the government “return that land” to the people of Parnell, suggesting it was bound to become an election issue next year.

Rolling back treaty settlements? Neither of them chasing the Maori vote, then.

BUT IT WAS THE PORT that really got them fired up. Ralston wants it gone. The port’s containers, cars and other goods sit on land worth $3 billion, he said, and “if that’s not a good reason to close it I don’t know what is”.

He turned to Lee and said, “Why isn’t Ports of Auckland paying rent?”

Lee shot back, “They pay a dividend!”

Suddenly they were using their words like fists. Ralston: “That’s it, that’s the lack of business thinking I’m talking about!” Dividends are unreliable, he meant, but rent is fixed.

This dispute happened during Ralston’s official speaking time, so when Lee tried to respond again, Ralston silenced him: “Hang on, Mike!”

No one does the exasperation of the worldly wise quite as well as Bill Ralston.

They came back to it later. Did Ralston believe the port should be moved and also sold? It wasn’t clear, although Lee thought he did, and said that didn’t make any sense. Lee, a former seaman, has never seen the value of moving the port. Both are opposed to any further reclamation.

Lee finished his speech with a formal declaration of his politics: “This is the most go-ahead, generous, progressive part of Auckland,” he said. “But we have a problem with homelessness. We need a night shelter. We are the only city in New Zealand that doesn’t have one, and it is the council’s role to help provide that.”

Then he added, “There’s a sign outside that says ‘Just Vote’. I don’t agree with that. I think you should have a good think first.”

Or, as some would have it, Lee’s a dinosaur and Ralston’s a dilettante.

How different are Ralston and Lee? There’s political outlook – the urbane centre-rightist vs the battle-hardened old lefty. That comes out in lots of ways, perhaps most obviously in their view of funding sources for new transport projects. Although it wasn’t discussed on the night, the government wants the new council to agree on some combination of public-private partnerships, infrastructure bonds and asset sales. Lee will be cool to hostile on them all; Ralston warm to enthusiastic. (Likely new mayor Goff, as it happens, is warm on PPPs and bonds, but opposed to selling strategic assets.)

As for transport itself, they both say much the same things, although Lee has the cred: he’s made rail a cornerstone of his life’s work. But does anyone listen to him still?

On the Unitary Plan and the port, Ralston shares the modern vision of a compact city with a reinvented waterfront. Lee does not.

At the end of the night, a man in the audience claimed Metro has predicted Ralston will win. If that’s the case, he asked Ralston, apart from being the PR flak for Crafar Farms, what did he actually stand for?

Ralston said people shouldn’t believe everything they read in Metro.

Do we really think Ralston will win? Too hard to call.