Bill English is demonstrating the character traits to be a far more important prime minister than his unlamented predecessor.

The history of Ngati Whatua Orakei is not as well known by Aucklanders as it should be. After a hundred years of dubious sales, outright confiscations and voluntary land donations by the tribe, the iwi that in 1840 had owned all of what is now the most valuable real estate in New Zealand found itself, by the mid-1950s, utterly landless except for its cemetery in Okahu Bay.

Ngati Whatua’s relationship with the National Party has been particularly vexed. Fresh from his victory in the 1951 waterfront dispute, Sid Holland ordered the destruction of Ngati Whatua’s village in Orakei in 1952. The Muldoon regime then sent in the police riot squad to clear Bastion Point in 1978. (In contrast, Ngati Whatua’s main grievance against Labour was Walter Nash’s imposition in 1959 of a politically correct “national marae” that led to the tribe being mocked by other iwi for having a “Pakeha marae” rather than one that gave life to its own history and traditions. It burnt down in 1990.)

As Ngati Whatua are tangata whenua in New Zealand’s only international and ever-more densely populated city, the return of most of their historic lands was recognised as impractical. These are now almost entirely either privately owned, used by the government for schools and hospitals, or are now as sacred for Pakeha as for Maori — think Pukekawa Hill, site of the 1828 peace treaty between Ngati Whatua and the Ngapuhi invaders and now home to the Auckland War Memorial Museum.

That reality is partly why Sir Douglas Graham failed to make progress on a historic settlement in the 1990s. The 2011 settlement negotiated by Christopher Finlayson was possible only because of the economic value of Ngati Whatua and other Auckland iwi having right of first refusal for all Crown land in their rohe, something Nick Smith then seemed to undermine as recently as 2015 when he carelessly identified such land for government housing developments. Wiser heads in the government intervened. 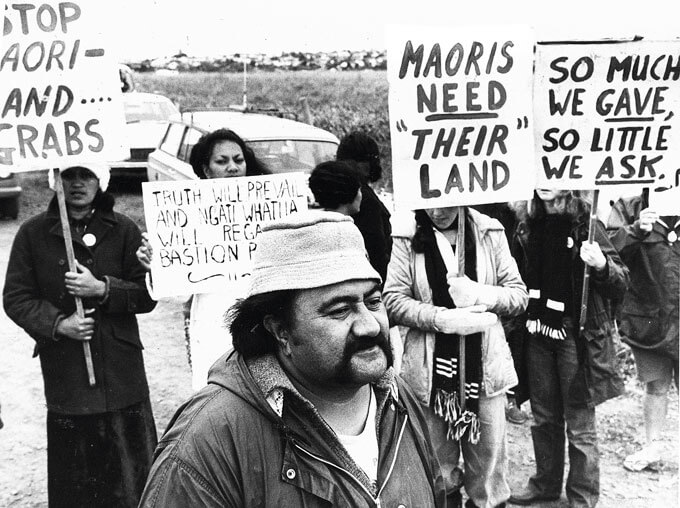 It is important to have a rough grasp of this ancient and recent history to understand how momentous it was for Bill English to choose to spend his first Waitangi Day as prime minister with Ngati Whatua Orakei. The PM went well beyond mere reconciliation between his party’s sordid record and Ngati Whatua Orakei’s 50 years of protest and struggle. Nor did he merely apologise. He embraced Ngati Whatua’s protest movement as making New Zealand a better country and Auckland a better city than it would otherwise be. It made a mockery of Labour’s claims that his decision not to play along with the Harawira whanau and their friends at Waitangi’s Te Tii Marae was somehow evidence of deep-seated or, perhaps worse, cynical racism on English’s part. Racism, of course, was always an odd charge against a man whose own children are part-Samoan and who is well known in political circles to have spent his whole adult life pondering what a modern Treaty partnership could look like.

In his early days as prime minister, English has proven himself much worse than his predecessor at hanging out with the Auckland media elite, whether Mike Hosking or Jack Tame. When establishing a relationship with the LGBTQ+ community at the Big Gay Out, English, whose government has announced the quashing of convictions for historic homosexual “offending”, also declined to gallivant on stage with drag queens. Had English been prime minister during the 2011 Rugby World Cup, he would not have minced down a catwalk, nor would there have been the three-handed handshake. English would never get into a cage at The Rock FM, even if Rog, Bryce and Mulls told him to. His major media stunt since becoming PM has been taking on and beating Sir David Fagan at the World Shearing Champs.

This is not to sanctify the prime minister. English could not have got where he is despite his lack of personal popularity were he not a shrewd political operator: part of both Ngati Whatua and the Big Gay Out’s appeal is undoubtedly that they happen to be in Auckland, where the voters are. Similarly, after eight years of John Key’s frivolity, English may calculate that following his own more subdued and serious instincts may also be in line with popular demand. On all important measures of character traits, private polling is already indicating English rating better than Key and well ahead of his hapless Labour rival.

Key was important in New Zealand politics because he re-set National’s brand after the madness of Muldoon, the excesses of the Bolger-Richardson years and Don Brash’s mid-2000s foray into race relations. But his resignation has failed to leave a vacuum, indicating the limits of his approach to government. Not even National Party ultras any longer lament his departure. English’s approach is very different, but it may yet make him the prime minister capable of applying National’s new brand to serious purpose, from ongoing national reconciliation to genuinely breaking cycles of despair to comprehensive tax reform — and perhaps even to finding a politically realistic way to respond to the ageing population.