Are we there yet? Women's rights in NZ examined in new exhibition

On the 125th anniversary of women’s suffrage, a new exhibition examines the ongoing struggle for gender equality in New Zealand.

On the 125th anniversary of women’s suffrage, a new exhibition examines the ongoing struggle for gender equality in New Zealand.

A decade ago, Auckland woman Emma Frost discovered a stone outside her whare tupuna, inscribed with a dedication to her great-grand-aunt, the suffragist and wahine toa Meri Te Tai Mangakahia. Intrigued, she investigated further.

Frost was familiar with the story of Kate Sheppard and her heroic efforts to win women the right to vote. But it seemed this woman, her tupuna, had gone several steps further. Mangakahia fought not only for women’s suffrage, but also for women to govern. She and her husband, Hamiora, were integral figures in the Maori unity movement, Kotahitanga, and in 1893, she became the first woman to address the Kotahitanga parliament.

Frost, who is secretary of the Women’s Centre in Waitakere and president of her local branch of the Maori Women’s Welfare League, was blown away. Like herself, Mangakahia had tackled head-on issues affecting women, such as alcoholism and domestic violence. “I thought, why haven’t I heard about her before? It became my mission to get her story out.”

She believes her ancestor’s progressive notions would have been fully supported by her husband. “Maori didn’t have so much of that gender imbalance. It wasn’t until the migration of the British and the introduction of the Bible, where the creator was given a male persona, that the view permeated that males are the leaders. But in our Maori mythology and Maori history, women and men very much had equal power.”

Mangakahia is finally given her due in Are We There Yet? Women and Equality in Aotearoa, Auckland Museum’s exhibition to mark the 125th anniversary of women’s suffrage this year.

So is Elizabeth Yates, who on November 29, 1893, one day after New Zealand women voted in a general election for the first time, was elected mayor in the borough of Onehunga.

Four councillors and the town clerk quit in protest at having a woman in charge, while others remained just to make her life hell. A great masculine rabble began to amass at borough council meetings to jeer at and harangue her. Nevertheless, she persisted.

Born in the far north of Scotland, Yates was already known as a fierce debater at the Auckland Union Parliament. Her bushy-bearded sea-captain husband had himself served as mayor after a gammy leg sent him into retirement; together they formed a formidable couple. 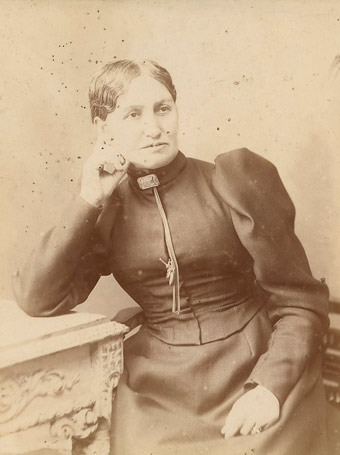 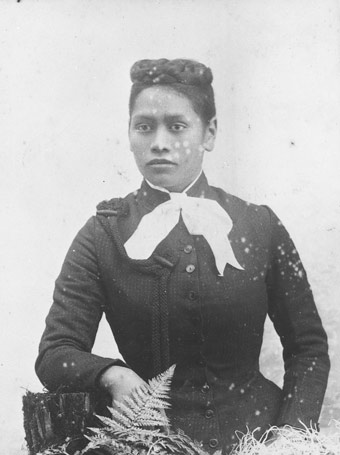 Long before women got the vote, property owners of both sexes had been able to stand in local body elections. But in 17 years, none but Yates, who owned a milliner’s shop on Onehunga’s main drag, had tried it. Upon beating draper Frederick Court by 13 votes, she became the first female mayor in the British Empire.

Yates and her “petticoat government” became a sensation, much more so than Kate Sheppard and her “shrieking sisters” (the media’s nickname for the suffragists), according to Yates’ biographer, Judith Devaliant. Yates was the most-talked-about woman in 1894 and caricatured in a dozen magazines, very occasionally in a flattering light, but most often as a nag or a shrew.

There was a limit to Yates’ temper, to be sure. She is quoted as scolding a councillor for smiling and is described on the government’s New Zealand History website as “often tactless or dictatorial”. But in just one year in power, she liquidated Onehunga’s debt and upgraded its roads, footpaths and sanitation.

Marjory Hamlin, Yates’ great-niece, says, “The suffragettes were the ones who got all the applause, but Elizabeth was a pioneer before then. All of her groundwork had been done before women got the vote.”

Hamlin, a make-up artist who has worked on seemingly every iconic New Zealand film of the past few decades, delights in a description of Yates by politician George Joseph Garland, who just might have had a crush on her, that she “knew how to wear clothes”. She was a fine pianist and dancer, who read widely and prided herself on her horsemanship. “And women didn’t really do that either,” says Hamlin. “They didn’t drive carriages or anything, but she did.”

Yates departed from Kate Sheppard and the temperance movement in one major respect: she was not at all anti-booze. “It would be a burning shame to rob the working man of his beer,” she once stated.  In fact, after her husband died, she enjoyed a tipple herself. “She did become quite fond of it,” says Hamlin. So she was carted off to Auckland Mental Hospital. “And it wasn’t because of any mental illness, but because they didn’t know what to do with women like that in those days. She was outspoken, she was bolshie and difficult, she liked to drink, so they sent her off to the asylum.”

A few years ago, sound and vision archive Nga Taonga made an amazing discovery: a film shot in 1900 starring a small, nattily dressed woman making a speech against a painted backdrop, a large bearded man seated at her side. After some detective work, the woman turned out to be Elizabeth Yates, re-enacting her mayoralty in what is New Zealand’s oldest complete film. Far from appearing dour and humourless, Yates paces, gesticulates and waves pretend official documents around — all while grinning from ear to ear.

Victoria Travers, the curator of Are We There Yet?, says Mangakahia and Yates represent women who asserted more than just the right to vote. “We do tend to focus on the importance of the vote, but here we have women who were asking for more than the vote at that time.”

Travers says when it comes to women’s rights, New Zealand has tended to rest on its laurels. “We’re always going on about how we were the first in the world, and we were, by a significant margin. But where are we now in terms of things like pay equity?” In 2018, New Zealand has a gender pay gap of over nine per cent and pitifully few women on boards. We also have the highest rate of domestic violence in the developed world.

As Travers was starting work on the exhibition, Lower Hutt woman Kristine Bartlett and the union E tu won a landmark pay-equity victory for (mainly female) aged-care workers. But then Harvey Weinstein happened. “And after #metoo, we’d be foolish if we rolled out the same old celebration of how early we were,” Travers says.

Because it’s a show about women, it was trolled even before it opened. When the museum put a call out for objects, men took to Facebook to explain that it isn’t the museum’s place to comment on social movements. “But it is our job to do that,” Travers says. In the interests of reflecting the special challenges faced by women, “we’re putting the trolling on display, and we’re putting it in context, because any person who’s stood up for something has been trolled in some way”.

As a third-wave feminist (the fourth is currently upon us), Travers says the waves haven’t always been sympathetic to each other. “I remember not being able to relate so well to second-wave feminism because they were fighting for different stuff than what we were.” On the other hand, older feminists are prone to experiencing an unwelcome sense of déjà vu. That’s reflected in the exhibition’s cover photo, of a woman holding a handmade sign during last year’s historic Women’s March. “I can’t believe I’m still protesting this shit,” it reads. 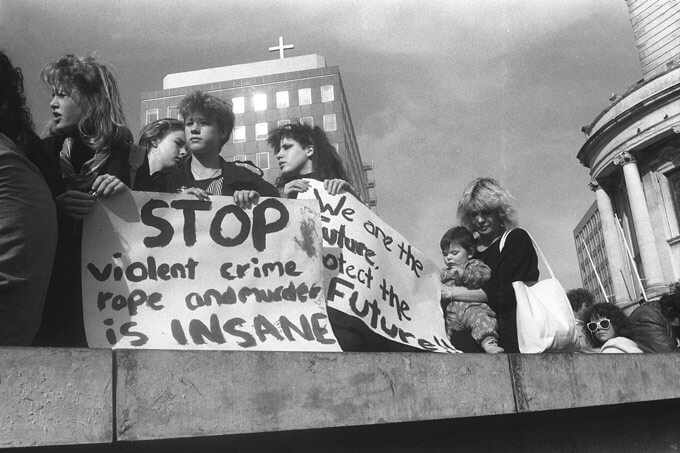 If there’s one thing that irritates the film-maker Gaylene Preston, it’s when Jacinda Ardern takes a few days to consider something and is rewarded by being called a ditherer. “It’s sexist, it’s ageist, it’s the worst of everything, and it needs to be called out. I want a considered PM. I don’t want to live in a country where all sorts of kneejerk reactions are made. Let’s face it — there was a war in Iraq based on weapons of mass destruction that were not there. It’s not dithering, it’s being considered.”

Preston has spent a lifetime populating our screens with females. Her latest film, My Year with Helen, follows our former prime minister Helen Clark as she tries and fails to break through her own glass ceiling in a bid to become the first female Secretary-General of the United Nations. “Obviously, there are a lot of systems that have to change to get a woman at the head, and that goes for a hell of a lot of organisations around the world and in New Zealand.”

On the 100th anniversary of women’s suffrage, in 1993, Preston made the film Bread and Roses, about the feminist, socialist and activist Sonja Davies, which even the man who commissioned it for TV publicly described as “an aberration and an oddity”. That same year, Preston returned a medal given to her to mark the anniversary. “I felt the New Zealand government at the time had done more to undermine the welfare and rights of women than any government I’d known hitherto. Sadly, there’s been more of it since.”

All Preston had learned in school about suffragists is that they were nags who wanted men to stop drinking. So she was surprised to hear audio recordings taken when they were grandmas in the middle of the 20th century that revealed them to be witty and charming. “They sounded so alive and sprightly, so modern.” In her first ever short film, made for Auckland Museum’s exhibition, the suffragists are portrayed by Lucy Lawless, Miranda Harcourt, Jean Sergent and Preston’s daughter Chelsie Preston Crayford.

Preston says getting the hell out of the country at the right time cemented her destiny as a feminist. When, in 1970, she moved with her husband to Cambridge, England, to become a “graduate wife”, she found herself in on the beginnings of the era’s women’s liberation movement. “I was part of the Cambridge Red Stockings, who were a seminal feminist thinking group.” By the time she returned, seven years later, feminism had caught on in New Zealand. Feminist magazine Broadsheet had been founded by Anne Else and Sandra Coney; the Working Women’s Charter, which demanded equality and denounced discrimination, was about to become a focus for activism.

Preston is heartened “our daughters and granddaughters” are coming to feminism’s rescue. “It feels to me like I’m constantly working with young women now. Helen [Clark] and I did an interview in New York recently where the entire crew were women. It feels like the cavalry’s arrived!”

Since discovering Meri Te Tai Mangakahia, Emma Frost has spoken to some “elderly scholars” who doubt not only her achievements, but that she even existed. It hasn’t come as a shock. “Maori have a very diminished role in our history, so it’s not a surprise to me that people of substance are less written about.”

Frost is proud to continue the work of her ancestor, but sometimes feels little has changed. “We keep arguing for pay equity, but we don’t seem to have a right to these things. We are the victims of domestic violence, but we still seem to have no right to assert what our own aspirations are of relationships and whanau.”

Which is why she thinks her great-grand-aunt’s story should be on the school curriculum. “How do we translate [her successes] to the young women coming through now? How can we utilise her get-up-and-go, her absolute fight for the right for women? She didn’t leave a legacy for us to become victims.”

Are We There Yet? Women and Equality in Aotearoa, Auckland Museum, July 6-October 31 2018.