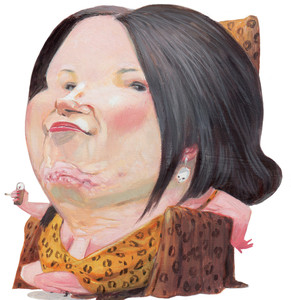 Paula Bennett, the chirpy 94-year-old host of the long-running show My Kitsch Rules, died today at the Swanson MegaMall. The self-styled “feisty Westie” fell under her mobility scooter while making a headlong run at a group of brawling pensioners.

“Bro, she was tramping,” a bystander said. “Somebody was going to get hurt for sure. But respect, eh. Old Aunty Paula always stepped up.”

Although best remembered for her TV work, “Aunty Paula” was also Prime Minister for 28 years. She said voters wanted to know just two things: “Are my taxes being wasted on some bludger, and is there enough Lewis Road chocolate milk to go around? You get that right and you can leave almost everything else to the officials, quite frankly.”

She made her own priorities clear when she succeeded Lord Key as Prime Minister: “Look, don’t expect any changes because, honestly, no one will ever do a better job than John did,” she told CloseUp with Cameron Slater. “I’m just going to keep things exactly how he’s left them.”

True to her word, New Zealand changed very little in the next three decades.

Dairying was the only game in town. In fact it came to town, when all the farm land and rivers had been used up. Eventually almost every section in Auckland city, from Huntly to Waipu Cove, had a cow on it.

During that time, New Zealand kept getting poorer, but people generally agreed they had never felt happier. They enjoyed the simple pleasure of sitting on their stool milking the cow, drinking a Woody and watching My Kitsch Rules on the giant outdoor screen.

“One night it might be Robyn Malcolm, another it might be Sir Dave Dobbyn or Dame Lorde. You never know who you’re going to get! We’re just mad here!” Aunty Paula would tell her delighted audience.

Although it was unabashedly light entertainment four days a week, there was also a serious side to My Kitsch Rules. On Friday there would be a ceremony for 10 ordinary Kiwis who had been chosen for their hard work “out there in the real world”.

Aunty Paula would solemnly hand each of them an embossed hand-lettered degree declaring they had graduated from the University of Life. Tertiary study had become irrelevant for all but the pointiest of pointy heads, and this recognition of “the real people doing the hard yards at the coalface” proved enormously popular. There would be many happy tears, and much partying into early Sunday.

Aunty Paula had spent her entire public life promoting her bogan sensibilities. A solo mother at 17 who found her way out of poverty through hard work, a subsidised university education and the Domestic Purposes Benefit, she never missed an opportunity to slip into something leopard-skinned to talk about her love of “black jeans, fun, 80s music and Queen”.

It seemed like meaningless banter but, over the course of six decades, she managed to subtly change the way New Zealanders thought about many things.

Is 10 mill a bit much to pay for a bunga­low in Point Chev? Is it bad wedding manners to drink your Jim Beam and coke from the can? Is politics worth thinking about?

“The answer to those questions,” she would say, “is no! Obviously! Sometimes you just know something without even having to think about it.”