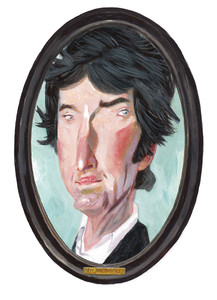 Media personality Mike Hosking has returned to his own planet. He was, in Earth years, 94. A memorial service will be held for him on Sunday morning at SkyCity.

Hosking slipped unnoticed into the South Island, disguised as an infant, in 1965 — a time when extensive coverage of the space race made the bright lights of a UFO hovering over Hagley Park no more remarkable than the night trots at Addington. Left to grow, watch and blend with the human population of Christchurch, he led an uneventful childhood, fitting in as an almost normal boy.

The trait he was least able to camouflage would prove to be his making as a broadcaster. Possessed of his species’ capacity to speak at 1700 words a minute, untroubled by emotion and heedless of logic, his staccato speaking style soon drew professional attention. Turners Car Auctions, Pyne Gould Guinness, the Christchurch Greyhound Racing Club all made him offers, but Hosking eventually chose radio.

Dressing himself in a style best described as undertaker chic, he spoke with the patter of a hip young Sydney DJ, though the sentiments he expressed were those of a much older man: reactionary, conservative, wary of change and difference, deferent to his patrician betters. Faithfully, and effectively, he had mirrored the New Zealand he had so carefully observed.

By his early twenties, he was the nationally networked radio talkback host of The Tonight Show, with an audience of 63,210 in New Zealand and 3.1 billion in his home galaxy, where it was often the most popular comedy series of the week.

By his early twenties he had an audience of 63,210 in New Zealand and 3.1 billion in his home galaxy.

Although many New Zealanders had embraced him, National Radio listeners were aghast when chief executive Sharon Crosbie signed Hosking to co-present Morning Report. He did not so much address the microphone as confront it, in a tone that had the audience bracing themselves for a Time Saver Traffic Update and a chat with the Mad Butcher. Letters from outraged listeners clogged the mail and delighted Hosking. By the time he was offered a job presenting breakfast TV, he was entirely without self-doubt.

As so often happens in television, he found himself in a highly charged atmosphere of sexual tension with his co-presenter, Kate Hawkesby. The are-they/aren’t-they drama kept viewers enthralled for several years until TVNZ appointed as head of news the infamously ascetic Bill Ralston. Declaring “that sort of carry-on” to have “no place on TV”, Ralston changed the breakfast menu.

Hosking suddenly found himself in thin career air, finding solace only in his mirror and his comely co-presenter, who gently encouraged him to assume the look of a younger man or, as a less-kindly gossip column had it, “a hairdo that looks like Kate dragged him backwards through a hedge”.

His exile was short, however, and he was soon replacing Paul Holmes on the coveted and widely respected NewstalkZB breakfast show. With editorials and questions that appealed to listeners’ darker angels, he became a firm favourite, with lines such as: “The cycling fraternity have done themselves no good this week. They sound like an up-market trade union; a lycra-wearing grievance society.”

And, of Charter Schools: “You don’t like it? Don’t go. You don’t believe in it? Don’t enrol your kids. You think it will be a disaster? Stay away.” As one listener put it: “He makes it feel okay to put yourself first.”

Hosking is also remembered for unaccountably getting embroiled in debates about the difference between advertising and journalism. He would always treat the issue with a chuckle, saying it was absurd that you “couldn’t interrupt an interview with the Prime Minister to get him to blind taste test cans of Red Bull, without some poser at Metro getting sniffy about it”.

A memorial library is being planned to house transcripts of Hosking’s 40 years of morning editorials. McDonalds-I’m-Lovin’-It-Governor-General Nikki Kaye said, “It’s a rich, awesome heritage and I’m sure it’s what Mike would have wanted in terms of going forward. Except maybe the one about illegal aliens.”