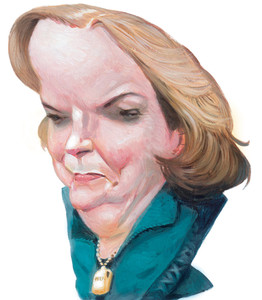 Judith Collins, beloved grandmother of the nation, has perished at her Coromandel home, falling backwards into a composting toilet. “Granny Jude” was 94.

Universally adored for her cheerful chirpy nature and great warmth, she was a kindly godmother to the poor, the frightened, the environmentally concerned. A hug from Granny Jude, people would say, could keep you going all winter.

A scandal in the 2014 election year irritated her almost to tears, but she embraced it as a useful pretext for skipping a tedious campaign. It was then, as she holidayed in Pauanui, that her life changed in the most remarkable way.

Colleague Maurice Williamson had arranged for her to use a friend’s holiday home. Helpfully, he had rewired the spa pool before her arrival. Unhelpfully he had — as Granny Jude would later tease him — “done a Maurice on it”.

The voltage she sustained as she set down her Kahlua and milk and stepped into the water was “enough to drop a horse” according to paramedics. “And yet there she was, out for the count, but breathing steadily with a big smile on her face.”

Even more surprising was the revelation upon regaining consciousness that she was now an ardent communist. “It was as if a switch had been turned on,” said Maurice, “which was quite funny when you thought about it.”

As indomitable as ever, but now with a heart that beat for the downtrodden and the forgotten, the new Jude became a milk-fed Mother Teresa. Expensive Trelise Cooper jackets were replaced by Greenpeace T-shirts, heels gave way to hemp sandals.

Everywhere she went, she dished out cheesecake to the poor and gentle chidings to the rich. She trailed goodness, warmth, and patchouli.

She browbeat the country’s dairy exporters to give free milk to Africa. She campaigned for the decriminalisation of drugs, for a noncustodial penal system, for the deportation of Paul Henry, for bicycle lanes.

She battled for the preservation of kauri wetlands and rare snails, she wrote generous, moving letters of apology to those she had hurt, beginning with Metiria Turei and ending, 189,000 notes later, with Katie Bradford. When she bathed the feet of David Benson-Pope for Campbell Live, John Campbell wept for hours.

Beloved as she was, Granny Jude had her enemies. After waiting six years in vain for the “best political stunt ever” to deliver its punchline, former “besties” Cameron Slater and Rachel Glucina rounded on her with a cold fury.

Footage shot from his SUV of a cackling Glucina shoving Granny Jude off her bicycle would win Slater his 16th blogger of the year Canon award but was otherwise deplored.

People said it was “just like Granny Jude” to respond by visiting the families Slater had mocked on the occasion of their children’s deaths, to offer them sympathy.

“She honestly didn’t have a mean bone in her body,” said long time friend Mike Hosking, “and she could turn your whole life around. I’ll never forget the day we pushed the Maserati into the compactor.”