The love song of Davina Murray

As a barrister, she was a minor name in the criminal courts of Auckland. As a defendant, she has become just about as famous as whoever won X-Factor. 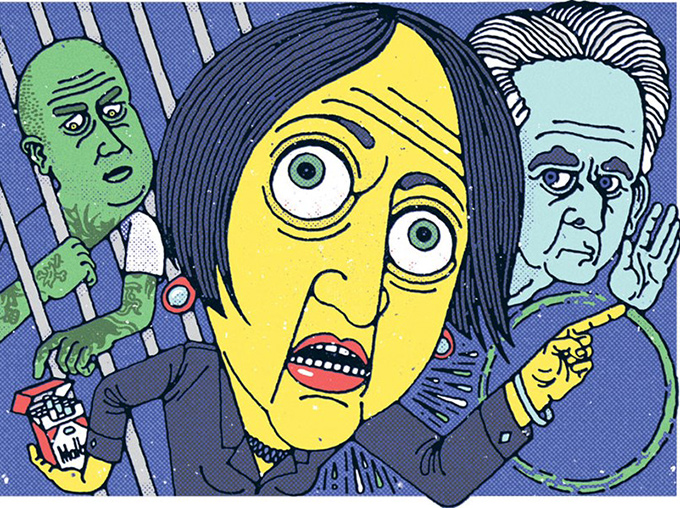 Love moved like an unseen hand in courtroom three of the Auckland District Court on a Thursday morning this winter. It had got 41-year-old Davina Murray out of bed that morning, got her dressed all in black — tight black pants, tight black jacket — and got her to the court on time, at 9am, the hour of her judgment and her latest exhibition of what love can do, how it operates, where it leads. I came to watch. I wanted to see what she looked like. There was a serenity about her, a faith, something certain — she looked like a zealot, burning with love.

Murray is the criminal defence lawyer who was busted for covertly passing on little gifts — an iPhone, a packet of Marlboro, and a Bic lighter — to convicted murderer and rapist Liam Reid in Mt Eden prison. As a barrister, she was a minor name in the criminal courts of Auckland, a round and capable presence. As a defendant, she has become just about as famous as whoever it was who won X Factor.

Davina, Davina, with her light, lyrical name, brought low by her love of a man sentenced to preventive detention for acts of extreme vileness. Newspaper report, July 7, 2009: “Emma Agnew’s suffocated body was found hidden in forest scrub behind the Spencer Park camping ground, 15km northeast of Christchurch. The profoundly deaf young woman had been missing for 12 days after texting family to say she was planning to meet a man who was interested in buying her car.”

Auckland District Court is downtown on Albert St. It takes up a lot of room. It’s like a rehearsal for Mt Eden prison, with its metal detectors, its large security guards, its efficient processing of various assorted misdemeanours. Courtroom three is on the first level. I walked in, and saw famous people — Amanda Gillies from 3 News wore interesting shoes, and One News sent a boy. Nine other journalists took their seats in the press box and public gallery. The nation was about to be reliably informed on the latest instalment of bad love.

Davina sat next to Barry Hart. He looked lost. In his pomp, defending such raw New Zealand monsters as Antonie Dixon and Malcolm Rewa in the High Court, he was always alert, highly strung, kind of menacing. Now, at 71, he was still enviably trim, his small frame draped in a good, slightly dated pinstripe suit. But the light in his eyes had gone out. There was a terrible dullness about him.

When he was her boss, they shared chambers at 15 Jervois Rd, his name in huge, inspiring letters on the side of that handsome building in Three Lamps. His career collapsed, he left the building. Declared bankrupt, unable to practise law after being struck off for overcharging his clients — how did he fill his days? What was there to do? He came to court in the role of her McKenzie Friend, meaning an assistant without legal qualifications.

I continued studying him. When he raised his head, and stared into space, the hollowed face with high cheekbones gave him the look of a native American Indian — a shaman, someone wise and holy. He pursed his lips, knotted his impressive eyebrows. Was he listening for some hidden vibration, in communion with some secret message? What was being made known to him? The eighth colour of the rainbow? The time and place of Christ’s return? Then he lowered his head, and put his hand over his face. He had merely been immersed in the everyday view that his greed had afforded him in the twilight of his years: hell.

Judge Russell Collins entered the courtroom. A former crown prosecutor in Napier, he was appointed a District Court judge in Auckland in November last year. What nostalgias for Napier’s pretty Marine Parade, for the ebb and flow of a provincial courtroom, as he found himself in grimy, downtown Auckland, the Fates deciding that he’d have to preside over a case made maddening and ridiculous by the antics of Davina Murray?

There is a newspaper photo taken of him clearing out his office in Napier and preparing for the move north. He’s wearing jeans and an open shirt. His smile is genuine and happy; his bald head seems entirely untroubled. The man who entered courtroom three on a Thursday morning earlier this month looked as though he’d aged rapidly.

Collins kept his head down. He only dared to glance at the defendant; it was though he suspected just one look might set her off. He read out his judgment. He said the charge against her had been proved beyond reasonable doubt. Murray had said the cops planted the phone on Reid; she didn’t offer a lot of evidence.

“Distilled to its essence,” he said, “this is a simple case.” But the case had ended six days previously. Had it really taken him that long to reach a verdict? What was he thinking about all that time? The answer was in the rest of the judgment, which detailed his opinion of “the defendant’s approach”.

The bald head quite likely throbbed and steamed as he bent to the task of listing her faults and her wickedness. “Repeatedly talking over witnesses and the judge. Repeatedly asking questions of witnesses when looking at the media benches… Turning to the media benches, laughing or grinning… Lateness to court… Making gratuitous comments after rulings adverse to her were given… Until directed not to do so, walking in wide circles.”

Walking in wide circles! What he failed to appreciate is that she was dancing. Sensual, blathering, pulling faces, of course she had run amok in court — her skin was on fire, scorched by the hot coals of love. Her texts to Liam Reid were intercepted; the court heard her swoon about his excellent kissing, about how he “gets her”.

She was released; he stayed where he was, banged up. Bad love, crazy love — was the whole thing just a sad, tawdry business, or had something good happened between two people?

Was there a valuable clue to be learned in an interview she had given New Zealand Lawyer magazine in 2010? “In her short time at the bar,” wrote the journalist, “she has seen a lot of despair and regret. She knows she has to build up a resilience to it. She said, ‘The whole length of the process to even get to the trial is so long that you end up building quite intimate relationships with their parents, their sisters, their brothers, their friends, and you understand the dynamic that that person has in their life… That’s a lot to carry on your shoulders.’”

I emailed her an interview request. She replied by text, “I am going to give time to the media company that donates $14k to Reid’s forensic expert such that his appeal can be progressed.”

She meant his appeal on the convictions for murder and rape. She insisted on his innocence; she was Karam to his Bain. News of her arrest for supplying contraband to Reid in prison led to an interview in the Otago Daily Times with the Dunedin victim he had attacked in bushes outside a carpark, and punched, choked, threatened and repeatedly raped.

She said to the paper, about Murray, “What grounds is she going on that he’s innocent? Is she purely going by what he has said? Why does she think that and why does she think she can go and challenge what I’ve said, what the judge said, what witnesses said and what a jury has come to believe? There is no doubt in my mind that he did this to Emma and I.”

A traumatic attack in a carpark in Dunedin; and four years later, a phone, a packet of fags and a disposable lighter smuggled into prison in a bra, and slipped inside Reid’s shoe. The judge remanded Murray on bail until September 6. She told him she intended to apply for a discharge without conviction. He nodded, and got the hell out of courtroom three before she said anything else.

Murray left the court, radiant, criminal, possibly gaga, a slave to love. Hart left the court, and wandered aimlessly around in the corridor for a while. Suddenly, he made a dash back to courtroom three. The silly old fool had forgotten his raincoat.