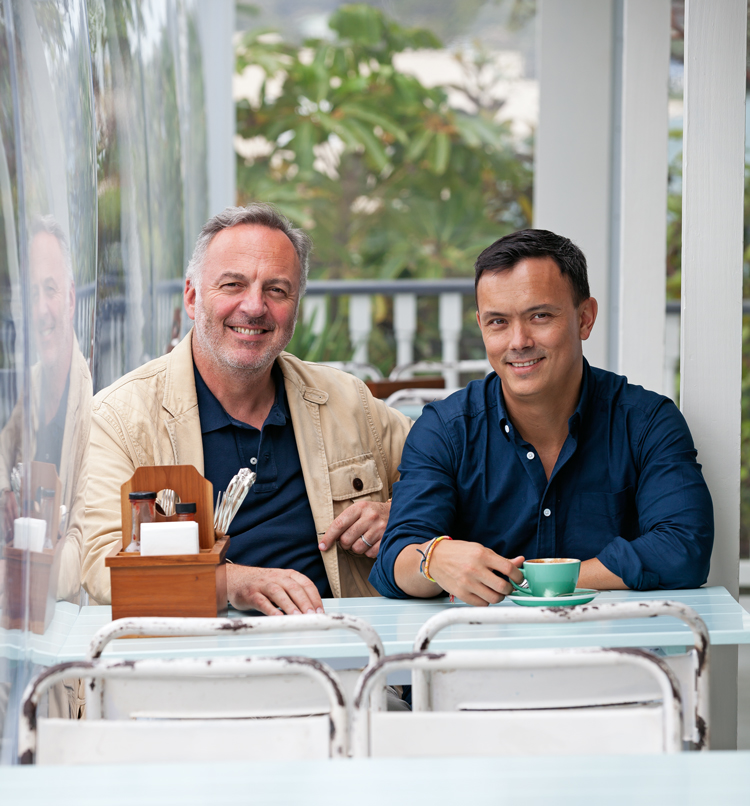 It’s a bit ridiculous, really. You sit on the upstairs verandah, the balustrades and all the other woodwork painted white, a box of lovely old silver cutlery and a platter of oysters (three kinds, if that takes your fancy) on your table to share with a friend of choice. The breeze is gentle, the sunshine dappled, a crisply cool bottle rests in its bucket, and out there in the world pohutukawa cling thick and green to the headlands, children and dogs are adrift on the yellow sand and a scatter of boats take their ease on that intoxicating scoop of beautiful blue-green sea. If you’re really lucky, as I was, there will be dolphins. Oneroa has been waiting for The Oyster Inn for a very long time.

They have the old Skinny Sardine site, in that gracious Victorian building above the strip. There’s an airy main room (bar and dining) full of bentwood chairs, the glorious verandah, a lovely private room that seats more than 20, a gallery and shop, and even hotel rooms, for which they’ll pick you up in their Kombi van. Yes, their Kombi van.

The best thing on the menu? Octopus salad: sweet, flavoursome and made with gorgeous barley and juicy octopus — chopped into chunks so that if you don’t like, you know, tentacles, you can forget that’s what they used to be.

There’s much else to give that dish a run. Lardo bruschetta come heaped with zingily delicious crushed broadbeans and mint — and usually I think bruschetta are a dumb cliché on a menu. As for the pulled pork rib sliders, packed with succulent meat and a julienned salad of daikon and apple with chilli mayo, they are so stupendous I expect this summer they will sell about a million. Totó was serving a slider that good at Taste of Auckland, but I haven’t eaten another like it anywhere. Yes, I’ve been to Depot.

Spaghetti alle vongole, made with diamond-shell clams, is an honourable and deeply satisfying version of the classic trattorian dish. And you can eat line-caught fish served with “triple-cooked” chips, fish of the day either filleted or whole, tarakihi sliders and more fishy dishes besides.

It’s not solidly a fish restaurant, which feels like a bit of a shame when you’re on an island. But when you look at it in a “please can I have some more pork sliders” kind of way, who cares? The menu here — from smoked kahawai omelette and homemade cereal in the morning, through a remarkably good salad of beets with labneh, to the steaks, the lamb with lentils and the signature dessert of rolled pavlova (to which the proper Michelliny response is undoubtedly: omg!) — is designed to delight everyone. Chef Cristian Hossack used to be Peter Gordon’s head chef at The Providores in London, and it shows.

Okay, there were a few problems. At the height of the asparagus season their side plate of greens was… broccoli. What?

Some of the waitstaff were so confused about their work they alternated between ignoring us when we wanted help and coming to the table every other minute when we didn’t. I’ve heard some of them suffer from Waihekeitis, an illness characterised by the delusion that nothing really matters very much. But is that really an island thing?

The maître d’, Clare Dunleavy, a Waihekean who escaped from The Shed at Te Motu after her family sold their winery to Chinese interests, is extremely good. Design, which is generally fine but has many overly cute touches, is by Auckland’s designer du jour, Katie Lockhart, and the whole place is the inspiration of owners Jonathan Rutherfurd Best and Andrew Glenn.

They’re very charming — and out on that verandah, when you’re down to the coffee and pav and you’re still enjoying yourself so much you wonder if anyone would mind if you started again with another round of oysters, charm is all part of the service.