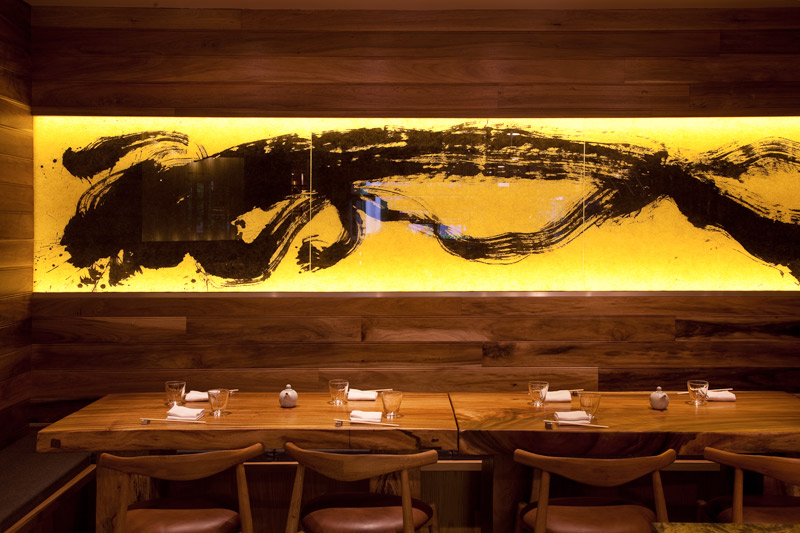 The bar on the streetfront is clogged with people despite the roadworks hammering away on Federal St. What’s a noisy digger or three when there’s fashionable eating, drinking and being seen to be done? People dress up, which is less common in Auckland than you might think.

It’s not quite true that SkyCity’s latest restaurant is Auckland’s top new hotspot. Sure, it was that, for a few precious weeks, but then Josh Emett’s Ostro opened down in Britomart and fashion’s tectonic plates subtly shifted. It’s tough in this town.

But Masu is still humming, and deservedly so. If you’re seriously into food, some sublime eating awaits you. If you like a place where they’ve worked long and hard to get every little thing just so, you should love it here. The crockery, wall hangings, furniture, shelf decorations, uniforms… all are beautiful.

The service is impeccably rushed. So busy, up and down the narrow aisles of this big room. Yet the waitstaff are attentive, friendly, knowledgeable, all you could wish. Not a big surprise, given the guiding hand of Matt Aitchison, formerly of The French Café.

Masu serves Japanese food, mainly on small plates to share — which is good because you’ll want to sample lots. Try the sashimi, thick cut, which requires the fish to be exquisite. It is. “Three piece” on the menu means three pieces of three different kinds of fish, so it’s a good serve.

There’s a crayfish taco with spicy miso that delivers the most marvellous wallop of the sweet rich meat. Almost unbearably tender lamb cutlets; gorgeous kumara with sesame seeds and a teriyaki glaze; even more gorgeous eggplant with ginger miso; light-as-air tempura; a dessert dish of pineapple to send you straight to heaven at the end. There’s nothing I don’t want to eat on this menu, and the list is so big I would need a dozen visits to work my way through it all. It’s also comprehensive on the wine, beer and spirits and excellent on the sake, though the house sake is so good there’s little reason to stray from that.

Nic Watt, the inspiration and driving force, is a New Zealand chef who earned his chopsticks in charge of top robata (think really flash barbecue) grills in London, Hong Kong and elsewhere. With this place, he presents everything he learned and liked to do in those places. Proud of his standards and his attention to detail, Watt is reportedly the most particular restaurateur SkyCity has ever dealt with. They’ve had a few, so that’s saying something.

And yes, it did cost a bit. Seven million and counting. You can’t actually see $7 million worth of restaurant, even allowing for the imported marble countertop it took 16 men (or was that 1600?) to lift into place, but that’s because a lot of it went on behind-the-scenes features such as a massive underground service lift.

Not that they got everything right: you pay your bill at a counter where a shelving unit hangs between you and the staffer on the till, so you can’t see each other’s face. It’s a bit giggly silly, considering how careful about everything they tried to be.

Is it all worth it? That depends who you are. Not to SkyCity in direct financial terms: there’s no way they’ll get that seven mill back from the restaurant. But it’s got to be worth it to SkyCity indirectly: Masu is already the go-to dining room for high-rollers in the casino. That, one assumes, is one core purpose for the place.

But, clearly, another is to provide the rest of us with a cosmopolitan, you-could-be-anywhere, posh night out. They’re very good at that too.

Is it for you? That may depend on what you think of the black cod, the signature dish. It looks stunning: wrapped loosely in a leaf propped up by a stem of ginger and caramelised with a sweet misu sauce. It tastes fabulous, with thick moist flakes and a citrusy yuzu marinade. It costs $45, and you don’t get much. It’s not local: that fish was caught in Alaska, flash frozen and flown to Auckland especially for your delectation at Masu.

Does it taste better than local blue cod? Probably yes. Is that relevant? Your call.

This, at SkyCity, is what cosmopolitan means. They want you to relish the conceit you could be anywhere.