Five street food and art collabs to try at StreetArtDego

Expand your palate with some food-art collabs at StreetArtDego, before you hit the central city galleries open late for Artweek's Late Night Art. 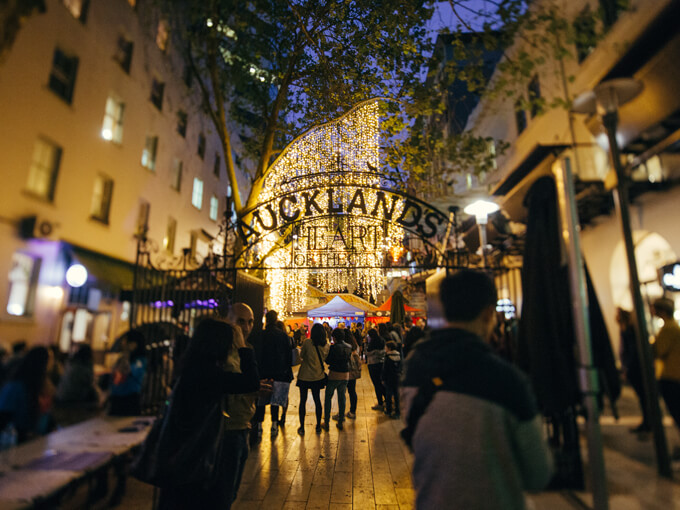 Expand your palate with some food-art collabs at StreetArtDego, before you hit the central city galleries open late for Artweek’s Late Night Art.

This year is StreetArtDego’s seventh year, as well as the 125th year of women’s suffrage, so it’s fitting that the collaborative dining project is being held in central Auckland’s Te Ha o Hine Place/Khartoum Place with its mural of prominent New Zealand suffragettes. The project, led by Courteney Peters of Gather & Hunt and Rebecca Smidt of Cazador with help of Heart Of The City, asks artists and chefs to collaborate resulting in art and food that reflects each other’s work. This year is particularly vegetarian- and pescatarian-friendly, showcasing plenty of light-based art, with Maori influences.

La Lumiere and The Rolling Pin
Founded by ex-film industry art director Kristina Ercolano, La Lumiere’s decorative lighting installations have an element of wonder – they’re known for wedding lighting that would put fairy tales to shame. So it isn’t surprising they’ve been chosen to lend an element of magic to draw visitors to Te Ha o Hine Place through a shimmering tunnel of light – the main feature of the event.

The Rolling Pin will be serving their lantern-shaped dumplings topped with sweet soya ‘caviar’ that reflect the light to look like tiny light bulbs, or mango spheres. The spheres are layered with manuka smoked chilli wafers to mimic the light installation reflecting on Te Ha O Hine’s water feature.

Hanna Shim and Wise Boys
Auckland-based artist Hanna Shim’s sculptures are full of contradiction – they are cartoonish and cute, juxtaposed by elements of irony. Burger truck Wise Boys Burgers look and taste like meat burgers, yet are in fact made of cleverly put together plant-based protein. The duality of Shim’s work is reflected in the non-traditional idea of burgers with no meat in them.

Her installation for the event is called Alex the Headless – a sculpture of a giant T Rex (an honoured guest to StreetArtDego) with a sliced watermelon where its head should be. It refers to Shim’s experience of dual nationality and identity crisis living in Auckland, something many residents can relate to.

Last Tapes Theatre Co. and The Pie Piper
Before she became the creative force behind The Pie Piper, Danielle Butler was the Company Manager of Auckland Theatre Company. Her StreetArtDego collaborators, Last Tapes Theatre Company just won a Fringe First award at Edinburgh Fringe Festival for Valerie, a diary-like theatre piece about mental health. The serious theatre skills of both will combine for a conceptual art piece that promises to thrill.

Judge Bao and Ngahuia Harrison
Ngahuia Harrison is known for characteristically New Zealand film and photography images that, with a little bit of surrealism, make you look twice: an out of place Halloween mask or an image mirroring itself in the next frame. Judge Bao is Jamie Johnston and Debbie Orr, an Auckland couple who quit their jobs to use a “simple grandma’s recipe” as the hero for a dumpling business. They will embrace traditional Maori kai moana as well as Chinese and Maori steam cooking techniques, serving pohutukawa smoked mussels, agria, horopito fish cake and crispy seaweed, inside a new experiment: rewena or kawakawa bao dough. Altogether, the team promises a celebration of New Zealand and its cuisine.

Lowbrow and Angus Muir
Angus Muir’s use of neon, mirrors and sweeping scale is eye-catching, impressive, and pleasing to look at. Lowbrow’s fast-food style chicken made with high quality ingredients is similarly geared for easy consumption. That said, the link between the chicken itself and Muir’s pixelated lightbox of abstract chicken pictures needs no explanation.