Words by Alice Harbourne, photos by Ken Downie and supplied.

We all heard about the fire. Some of us saw it – tourists, mainly. Hotel De Brett was at 98% occupancy that night in January, when – like many chefs the world over – the kitchen team at neighbouring O’Connell St Bistro left a stock pot on the hob over night. Unfortunately, they forgot to turn down the heat before leaving, and the residual fat caught fire, sending the kitchen up with it. “The hotel guests all had their phones out to film the damage,” explains owner Chris Upton, who eight months on from the disaster has had time to process the heartbreaking incident.

At that early stage, having established the fire was mostly contained to the kitchen, Upton remained hopeful about reopening the Metro top 50 restaurant. “We saw that Depot had a fire and managed to get things back up and running within three weeks, we thought we might be able to do the same.” The full extent of the damage slowly revealed itself. The fire had melted printers, vinyl flooring and the sous vide bath, resulting in high acid smoke that filled the heritage building’s interior. An accepted insurance claim effectively froze progress: no one could enter the building, Upton could only peak through the windows, hoping and guessing at which of the 20-year-old business’ belongings might be salvageable.

They poured over 300 bottles of wine away when they were eventually granted access, the heat of the fire had forced the corks. “Five or six of us stood in the middle of the restaurant in boiler suits around a big bucket, just uncorking and pouring, uncorking and pouring.” Then there were the damaged awards, the art work, Craig Miller’s Faemer E61 – the 50+ year-old espresso machine that’s been used all over the city. Sentimentality can be a real bitch. 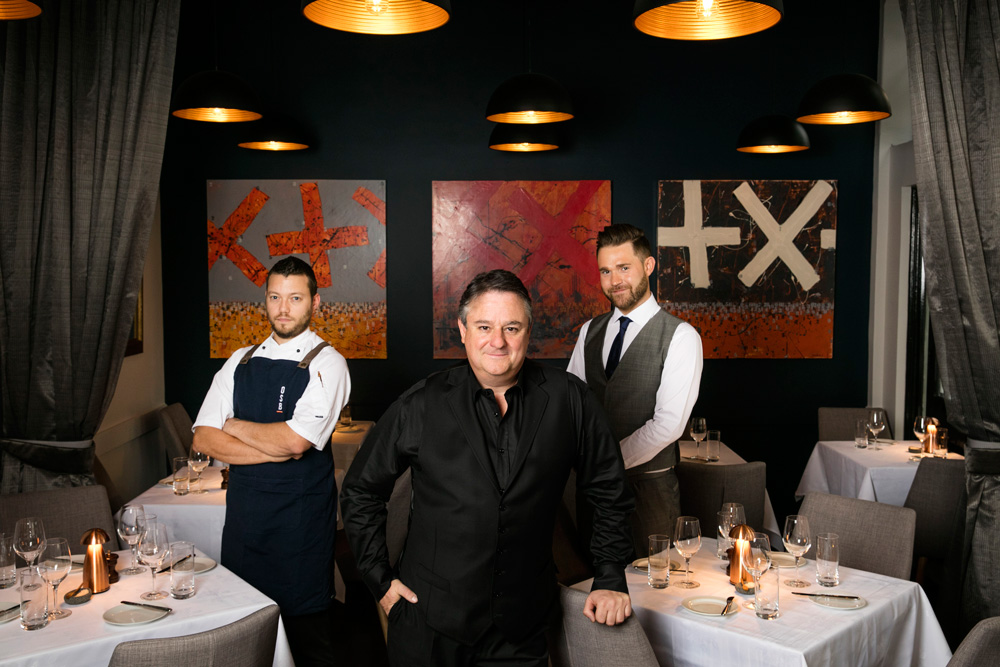 Those scenes seem unimaginable in the newly plush dining room. Three abstract, mixed media artworks by Bill Snider informed the room’s new colour scheme and subtly reappears in the details – the copper finish of designer, centrepiece table lamps and binding of the menus, the blue silk of the staff’s waistcoats. New comfortable dining chairs and cushioned tables elevate the bistro experience into something finer, a decision Upton consciously took. “We’ve made some changes, but we’ve kept the core beliefs. We’ve just refined and modernised things, and made the dining room more comfortable for our customers.”

The menu has been carefully refined too. It’s rare a chef is given seven months paid leave, and in between staging pop-up O’Connell St Bistro dinners and contributing to charity events to stay connected with regular diners, head chef Mark Southon has had time to experiment. On the spring menu, he’s particularly excited about the lamb rump and truffle-glazed sweetbreads, and a “toffee apple” dessert with Granny Smith sorbet, Royal Gala butterscotch and elderflower jelly. The head chef of a 20-year-old bistro has a duty as custodian of the classics, of course. All the old faves are still available, including the steak tartare (Simon Wilson will be pleased).

What a process it’s been to get to this happy stage. The responsibility of protecting a building built in 1853 is hefty, and Upton and co have respected that by waiting, and waiting some more. The most heartwarming part of the tale is the collaborative spirit of the community. The staff at the neighbouring Kapiti Store clearly have hearts as soft as their ice cream, and have been offering free cones of it to staff since the accident. The Restaurant Association of New Zealand offered their Mt Eden kitchen free of charge for recipe testing and staff training, while Upton’s been inundated with offers to pop-up at other restaurants.

Oh, and that coffee machine. Craig Miller restored it himself. He polished the front, but he deliberately left a few scars on the back of the machine. They’re part of its character now, which is true of the ordeal in general. O’Connell St Bistro is back, with an even better story to tell.

O’Connell St Bistro reopens to the public on September 9.