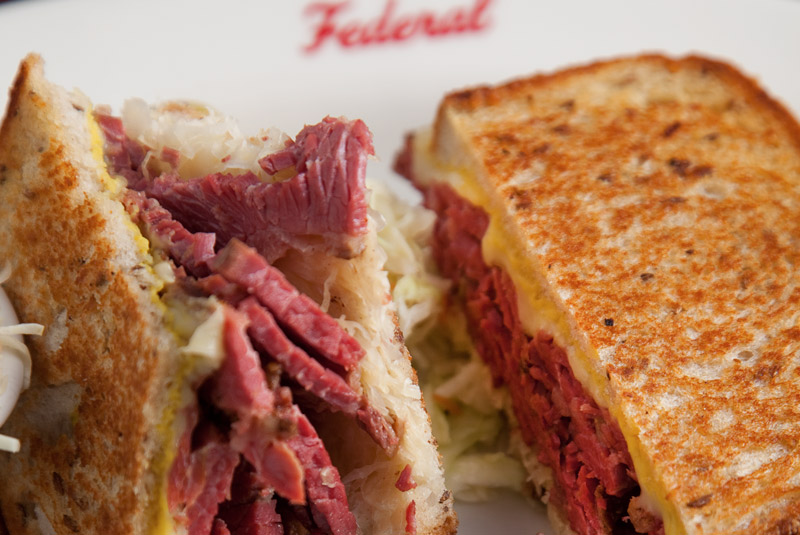 The usual thing with a restaurant this good is to say, “What’s not to love?” But there is something not to love about Federal Delicatessen, celebrity chef Al Brown’s bold new joint. Before I get to it, let’s run through the good stuff.

Which is almost everything. The idea, at night, is that you turn up with someone else and order a platter of meat — pastrami, meatloaf, schnitzel or half a chicken — and a “salad” or two (actually roasted or grilled cauli, eggplant and pumpkin) and set about your feast. It’s so good. The pastrami, which is smoked brisket with pickles, is rich, thick cut and flaky, the sort of dish that will set your eyes rolling back in your head at the sheer indulgent glory. The schnitzel is even better.

If all that meat-and-winter-veges sounds a little heavy, you can add iceberg lettuce or coleslaw. Not heavy enough? There are fries, potato and gravy, fried eggs (!) and, for the seriously mental, poutine: a Canadian dish of fries, cheese curd and gravy. “Trust us on this one,” says the menu. Frankly, even for Al Brown, there are limits.

A little secret here. While those meat platters and “salads” are designed for sharing, it is possible with a little serious application to polish one off by yourself. I have done this more than once.

The Fed has an all-day, seven-day set-up, and I’ve feasted at breakfast, too, on ridiculously good smoked hash, made with mullet, crushed potato and poached eggs. “Morning glory” is a magnificent salad based around haloumi and portobello mushrooms, and there is much more like that: pastrami with mash; pickled pork with eggs and a spicy-hot hollandaise on rye. And grapefruit, muesli, other more obviously healthy food.

From lunch onwards there are shellfish soups — oyster stew and clam cioppino, the latter served in a crayfish broth — which will send you straight to the universe of fishy fabulosity.

Even better, there is matzo ball soup, which could be the best thing they serve (and is also one of the cheapest). The broth is rich and sweet; the dumplings are mildly savoury, very light (for dumplings), very moreish. The big hunks of shredded chicken are both softly yielding and bursting with flavour. A miracle dish.

Love eating tongue? They serve it sliced superfine, with caperberries, cress and witloof to add sharpness, and tuna mayo. A kind of clever-clogs vitello tonnato. Judging from the blogosphere, this dish converts everyone who eats it into a fan, as it should. Tongue is a prince of meats and this is a fantastic way to serve it.

Lox, of course, chopped liver, latkes: The Fed is a Jewish diner rooted in New York in the middle of last century, complete with waitresses in fitted pastel costumes and hair curled just so. What is that? A homage to the servile lower depths of the Mad Men universe, inviting diners to pretend bottoms are there to be pinched? Doubt it. Is it an ironic post-whatever turn of the screw of cultural confusion? Or just something to chat about over a brilliantly tasty reuben sandwich? Eat and argue!

Brown has hooked in his A-Team from Depot next door to make this work. Warren Ford and Joe Williams — and Brown himself — are in charge out front, flitting charmingly from one venue to the other, while Kyle Street runs both kitchens. Street’s a genius. If he ever falls out with Brown and goes to cook in Timbuktu, I will follow him there to eat his food.

So what’s not to love? The coffee. It’s filtered, that’s all they serve, and even though it’s Havana, it’s crap.

There’s a reason Americans drink crap coffee: their diner culture was established by Italians who emigrated before the espresso machine was invented. New Zealand’s cafe culture was created after the removal of import controls in the 1980s, when espresso machines already existed. So we’ve got really good coffee and they’ve got swill.

At The Fed, they serve their swill in a bottomless mug. But, y’know, getting more of a bad thing doesn’t make it better.

With decent coffee, this could be the best cafe in the city. It’s definitely one of our finest bistros. I’ve been five times and I hope they let me back for more. I hope they get an espresso machine too.