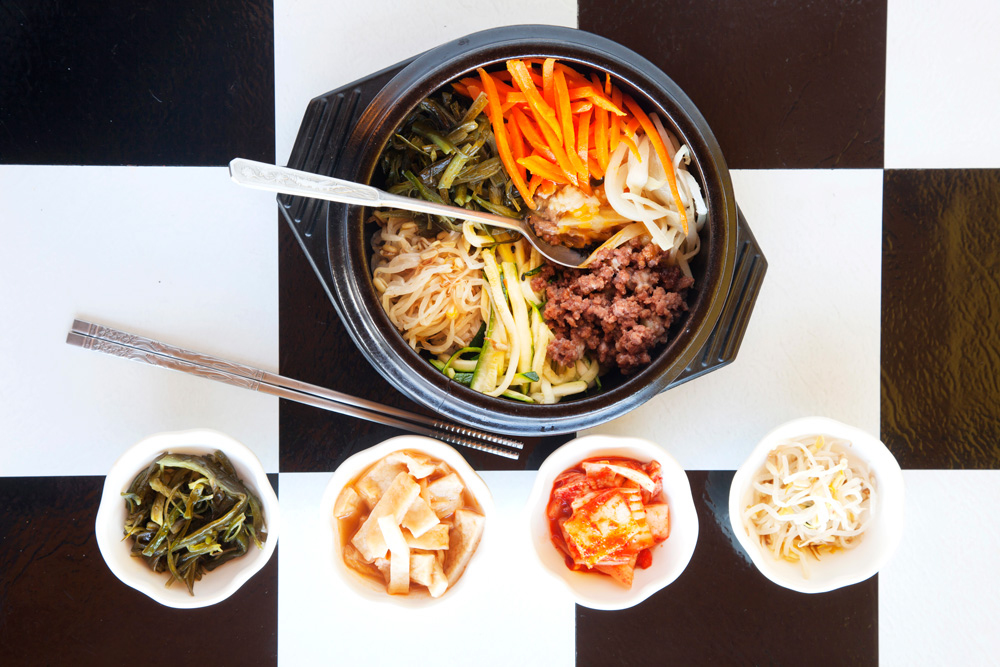 Presenting the best places to eat Korean cuisine in Auckland for under $20.

1C/47 High St, central city
Why does that queue stretch out of the door so often? Because inside you can find delicious galbijjim: short beef ribs with the special house sauce and vegetables in a vermicelli bone broth. We’re also partial to the ojigo bulgogi (spicy squid and marinated beef), and the dishes all come with tasty Korean accompaniments.

29 Link Drive, Wairau Valley
Where do we start? The service that makes you feel like you’re at your favourite aunt’s house; the great cuts of meat you cook at your table and eat with a heavenly mix of sea salt and sesame oil; some of the best kimchi in town, and so much more. Make sure you try the pork belly and boneless galbi. Outstanding.

490 Queen St, central city
“Dak” means chicken in Korean and so, while there are other things on the menu here, you really should order poultry. There’s dak galbi, a classic working-class Korean dish of chicken thighs in chilli sauce and rice, which you cook yourself. And there’s dak hanmari, a chicken soup which starts out plain and ends up a rich, nourishing broth. A plate of fried chicken will keep hunger at bay while you cook.
Korean

Cnr Wellesley and Lorne Sts, central city
This tiny hole in the wall serves hot, slightly oily Korean pancakes, and it’s so popular the council has decided to widen the footpath outside just to accommodate all the customers. About time too. The pancakes are round, doughy and yummy, especially the classic bulgogi: beef and cheese with cabbage — the perfect downtown warmer on a cold, blustery day.

10/20 Link Drive, Wairau Valley
You’ll find Queen Chef in the back of the Queen Mart Korean supermarket — it’s not much more than a commercial kitchen with a couple of plastic stools. From here each day they serve up some of Auckland’s best kimchi, along with a selection of home-style soups and the odd fried pancake — recently, we ate a stew of baby octopus cooked in kimchi and chilli on rice. It was fantastic.

9 Commerce St, central city
Homestyle dishes are cooked and served here by friendly hosts who hail from downtown Busan. You’ll find the usual menu staples, from bibimbap to bulgogi, plus value set meals for two or more. Most everything comes with multiple banchan (side dishes); the potato one is a standout. Hite beer, plum wine and soju feature on the drinks menu.

39 Birkenhead Ave, Birkenhead
Ta-ke is small and supposedly a Japanese restaurant, but the secret is, they also have a Korean menu and that’s where the best food is. You have to ask for it, and they will translate for you, or you can just point at what everyone else around you is eating: big bubbling stews in kimchi stock, with pork or seafood and great bits of tofu. Be sure to hold off eating until the stew has reduced and developed its full flavour.
Japanese/Korean

Food truck (tigerburger.co.nz)
In a Venn diagram of 2015’s hippest foods, Tiger Burger sits bang in the middle. The menu of Korean-inspired burgers changes regularly, though pulled pork and spicy kimchi, served in a preservative-free Wild Wheat bun, is a justified staple. And you really have to try the kimchi fries: crunchy hand-cut agria chips doused in chilli sauce. Who knew fermented cabbage would pair so excellently with Colby cheese?
Korean burgers

23 Mokoia Rd, Birkenhead
If only every ’burb had a joint like this. At Yummy Korean, they seem genuinely excited to see you, and even more excited if you order the ox-bone soup, which comes in a boiling-hot stoneware bowl into which you dip a bit of kimchi and a bit of rice and make yourself a bit of stew. The fish roe soup is also excellent.