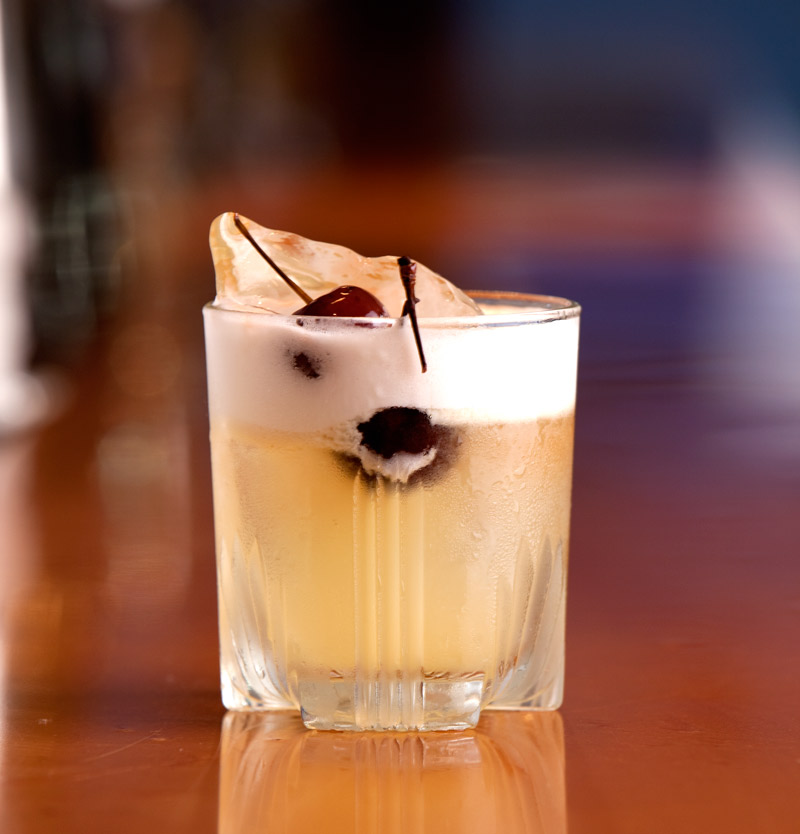 Bourbon or single malt? Delaney Mes finds that the perfect whisky sour is a fine art.

There was this unfortunate incident in my sixth-form year on a driveway in Mangere Bridge, involving that horrible drinking game Four Kings, some boys I probably wanted to impress, and ruining my older sister’s brand-new skirt in the mud, while throwing up. Bourbon had been the main culprit: straight, after a couple of those premixed pink things, and cheap beer.

I like to think that with age comes maturity and, after bourbon and I had a long and amicable break, here I was at the Late Night Diner, having ordered a whisky sour. One whiff and I thought I smelled a rat. I asked the bartender, who certainly didn’t lack confidence, what whisky he used. “Maker’s Mark Bourbon. It’s sweeter,” he quipped.

I must have looked horrified.

Bourbon is traditionally the main ingredient in this drink, which until that moment I had thought was much cooler. I had images of cigars and leather; the bourbon gave it a slightly bogan feel. But it had all the other elements of a whisky sour I was used to, and it grew on me.

As with their superb liquor-laced hard shakes, LND garnished my cocktail with a maraschino cherry; when did the awful glacé cherries of my childhood fruitcakes become cool? When they were given a fancy name and served atop an alcoholic beverage in an American-style diner on Ponsonby Rd.

Whisky sours usually have more of a kick; it’s the tang and not the sweetness that I love about this drink. It’s a shaken cocktail featuring little other than whisky (sometimes bourbon), lemon juice, sugar and egg white. Some literature advises that egg white makes it a Boston Sour, but the consensus — at least in the places I visited — is that a whisky sour has egg white.

That part made me nervous initially; I’ve had to excuse myself from brunches before at the sight of overly gelatinous egg whites. However, shaken properly, with good whisky, the egg white gives this tart drink the body and texture it needs.

At The Corner Store in Mt Eden Rd, a far better bar than simply a holding room before Powerstation gigs, as I’d previously assumed, the bartender was the only one I encountered to ask what type of whisky we wanted. I was happy to be guided, and he went with a blend of single malts.

He wanted to serve ours in a martini glass, which is traditional. My friend was horrified, though, and we opted for a rocks glass. Martini glasses are well and good for, er, martinis, but the risk of it tipping and all going down my top was just too great this particular evening.

Also, I like them served with ice, to keep the drink nice and cold, which I think is crucial when egg white is involved.

There are essentially two different drinks posing under the whisky sour name: the one served straight up in a martini glass and without ice or egg white, and the drink served in a lowball glass, on the rocks with egg white. They both give the same tart, strong, balanced kick, and really it comes down to personal preference.

For the whisky itself, just like in cooking, I’d rather take the best quality available, and I certainly prefer mine not made with bourbon. I found the best at Ponsonby’s Mea Culpa, above, an excellent cocktail bar where the staff care about drinks in a winningly nerdy-cool way.

It was a triple blend of single malts, expertly shaken with enthusiasm and flair. What you want in a whisky sour is the flavour and strength of the whisky, with tartness from the lemon, the subtle sweetness of not too much sugar, and body and texture from the egg white. I really did find greatness at Mea Culpa, but I have a feeling the search for perfection will be a lifelong and happy one.

Some prefer bourbon, because it’s slightly sweeter, but I prefer single malt.

Above: a whisky sour at Mea Culpa, Ponsonby. Photo by Ken Downie.