Can the City Rail Link spark a renaissance of Auckland's city fringe suburbs?

What will Mt Eden and Newton look like when the City Rail Link is finished? We meet some of those behind the reshape of Auckland's city fringe.

Building the City Rail Link is well underway, but what the areas around the new stations will look like is still very much a work in progress. Catherine Smith meets some of those involved in reshaping the future of Auckland’s city fringes.

Steve Groves and Kelly McEwan laugh that they spent their dissolute youth hooning around Eden Terrace on motorbikes. Back then, the area was a mix of light and even heavy industry, motorbike repair shops and warehouses in the small windy streets behind Symonds Street, Mount Eden and Newton Roads and Khyber Pass.
<!– –>
RelatedArticlesModule – City rail link

The property developing pair, known as Urban Collective, have been drawn back to their old stomping ground after projects as far afield as Queenstown, because they love the area and wanted to contribute to its renaissance with a series of apartments.

Rebranded as UpTown last year – announced in signs in the designer rusting steel – and extended into Normanby Road, the neighbourhood is readying itself for the exparbitrarylosive growth predicted to accompany the 2025 completion of the critical CRL station.

Tunnel and station construction contracts are yet to be let, but preparatory storm waterworks have already started with the demolition of the first apartment block on Mount Eden Road.

CRL owns the entire chunk of buildings and land around the station site below Mediaworks on Flower, Ruru and surrounding streets. When tunnelling starts sometime in 2019 this will be the key staging area for machinery and dirt, huge piles of dirt, before being sold on for development. 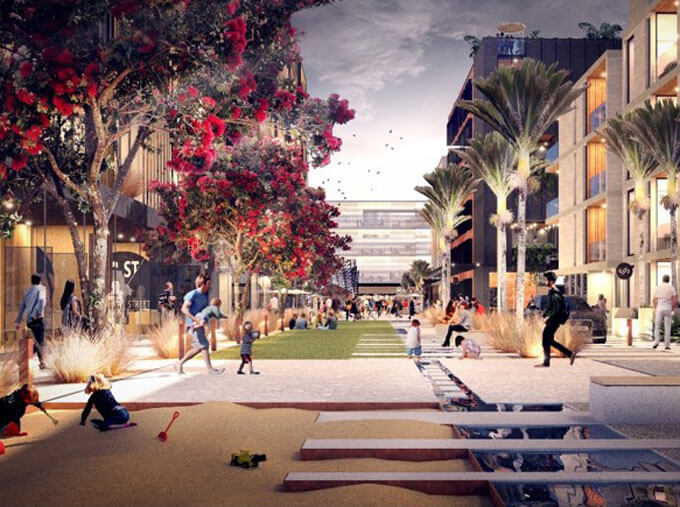 Where is the project at?

CRL has completed the master planning demanded by its bosses in central government and Auckland Council. It’s now begun consultation and detailed negotiations with landowners the length of the tunnels for what’s known as subterranean purchase and compensation.

“The geotechnics and engineering have been designed to support what could be potentially built – the maximum and best use – under the unitary plan.”

He adds that the CRL has created a master plan for the area, but that’s about blocking out what’s zoned into the plan, taking account of the Mount Eden view shafts, adding some connecting roads and turning others into pedestrian plazas to ensure road systems service the station well. He emphasises that this is not a town centre design, as what happens to the land – who buys it, when, and what they do with it – is still not decided.

“CRL was only formed in July 2017, so the strategy documents and possibilities are all still making their way through the board. Nothing’s been ratified, and until the [construction] contracts have been let the timing of when construction of tunnels and stations will be completed will become clear. [The land] will be unlikely to come to market before the thing is completed.”

Spokesperson Carol Greensmith compares the CRL to the size of the Waterview Tunnel project: the train tunnels are longer, deeper underground (42 metres at the Symonds Street ridge) and with more dirt, all of which gets spat out at the Mount Eden site. 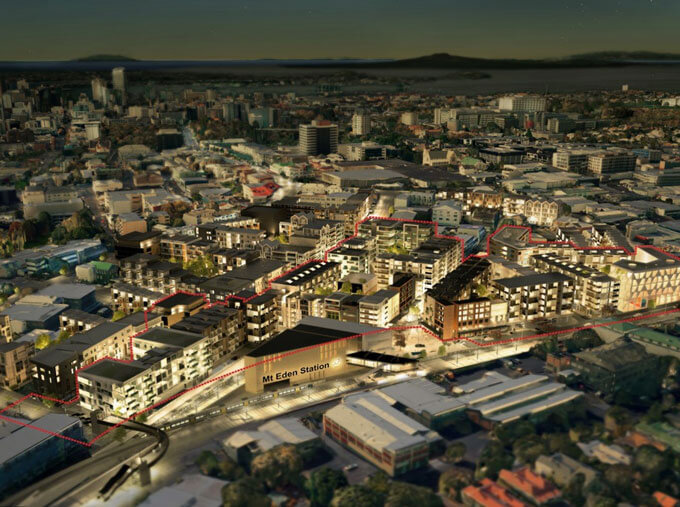 ‘We want a town centre, a heart’

Gary Holmes’ job as manager of the local business improvement district is to boost the 500 businesses in the area before and after construction.

Like town managers everywhere, he’s more worried about car parking than pedestrians (“without it, retailers will die”) and anxious that locals get a voice in the planning when it gets going.

“We’re not part of any Panuku plans, we weren’t part of the 2010 City Centre master plan,” he says.

“I think I’ve seen five plans for the city fringe, the CRL 2016 has no real plans apart from the station building. We still don’t know who makes decisions, what is the process, how do we get involved? Development is not just up to transport builders, we want a town centre, a heart.”

His group has another pretty picture – capping the heaviest trafficked intersection of Mount Eden and Symonds with a park – and he’d like to see amenities like a supermarket or health services, cool retail driven by hospitality (he estimates 100 eateries already), for the growing residential population.

“Our core ideas are connected and progressive, a poster-child for modern urban living. We want to be an international benchmark for city fringe living,” he says. He’s working with designers from the AR/VR Garage to create a virtual walking trail of the UpTown – the place has a rich history – and has his eye on “liberal, progressive people who..help drive social change..and have a desire to create new wealth and business.” 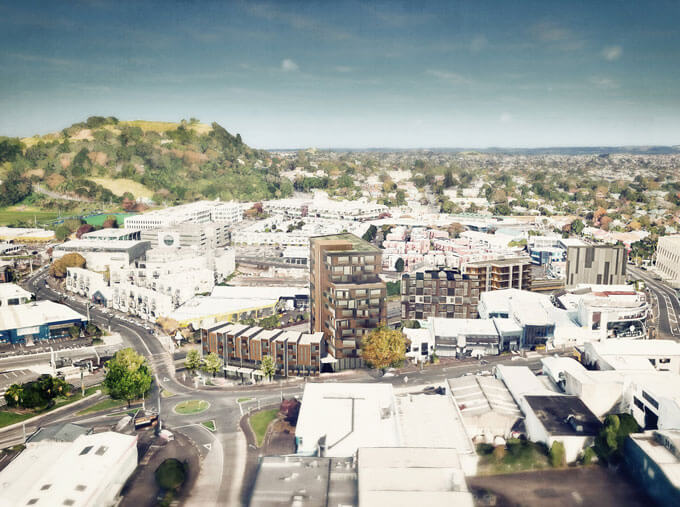 Build it – and they will come (and they are)

The guys from Urban Collective have already started. They’re the ones behind the 100-some apartment block replacing the legendary Kings Arms pub in France Street on the western fringes of the precinct above the northwestern motorway.

Owners are about to move into the Citizen apartments that have been re-fitted into the old Air New Zealand data centre behind the Orange Hall. The quality buildings, all of which include affordable flats, are a stark contrast to the leaky badly-designed blocks that went up in the 1990s.

“My dad converted the old Hellabies on Hohiperi Street [behind what was then the Winstones building],” says McEwan. “We’re picking sites now where cars aren’t important. In 2014 when we did 38 carparks for 24 apartments in Grey Lynn, nimbys said that was terrible, not even two carparks per apartment. This year, we’re halfway through selling 59 France [former Kings Arms] and we’ve sold 19 carparks for 50 apartments.”

“Younger ones aren’t buying cars, they’re walking everywhere,” he says. “You can buy an awful lot of Uber rides for the price of owning a car and a carpark. They have faith in technology solving problems, and they’ve not grown up with that urban divide between western suburbs and eastern suburbs.”

“This is the centre, the area will just become better and better. We still have to sell it to [people] because 90 percent of them don’t know Basque Park even exists, that you can walk to it. They just drive down Newton Road with their blinkers on.”