Hot, inflated, bubble, frenzied – every adjective associated with the current property market adds to the fractured, fe­verish nightmare for the locked out.

For buyers waiting on the sidelines for an economic shock to smack some sense into the situation, Covid-19 wasn’t the one.

Unlike the fallout of the Global Financial Crisis, Covid-19 has kicked the market into new highs. September saw buyers hoover up $7.3 billion of mortgage lending – a record amount. In the month following, the average price for a house in Auckland exceeded $1 million – an increase of more than 12% in a year. In the face of this hectic shopping spree, which represents a jump in year-on-year sales of more than 50 per cent, these new all-time highs are at odds with an economy that hasn’t seen a recession this deep in a century. But as long as the Reserve Bank of New Zealand keeps interest rates in negative territory, doesn’t reinstate hand-brake loan-to-value ratios, and government policy continues to support housing as a profit-driven commodity, there’s little to indicate frenzied growth won’t continue.

With the majority of lending going to investors, where does that leave buyers who are not in a position to purchase a home that costs 10 times the average salary, or who are indifferent to New Zealand’s traditional housing model? There’s evidence to show they are looking at alternatives well beyond the suburban pavlova paradise that was shaped by the government’s post-World War II housing programme – the one that gave rise to the quarter-acre block, which in turn moulded our neighbourhoods, communities and New Zealand identity.

Now that the nuclear family is no longer an accurate model on which to design housing or, is the stand-alone home being desirable, affordable or appropriate for all, the Unitary Plan and a small number of progressive thinkers are responding to societal shifts and slowly shaping change. With the Unitary Plan removing barriers to intensive development, particularly in locations close to transport, and with the removal of parking minimums, high-density housing close to key amenities is no longer restricted to the CBD. And due to the emergence of high- and medium-density housing at the city fringe and in the suburbs, apartment living is no longer considered city-centric.

POSTER: A region-wide visual guide to the most expensive areas in Auckland 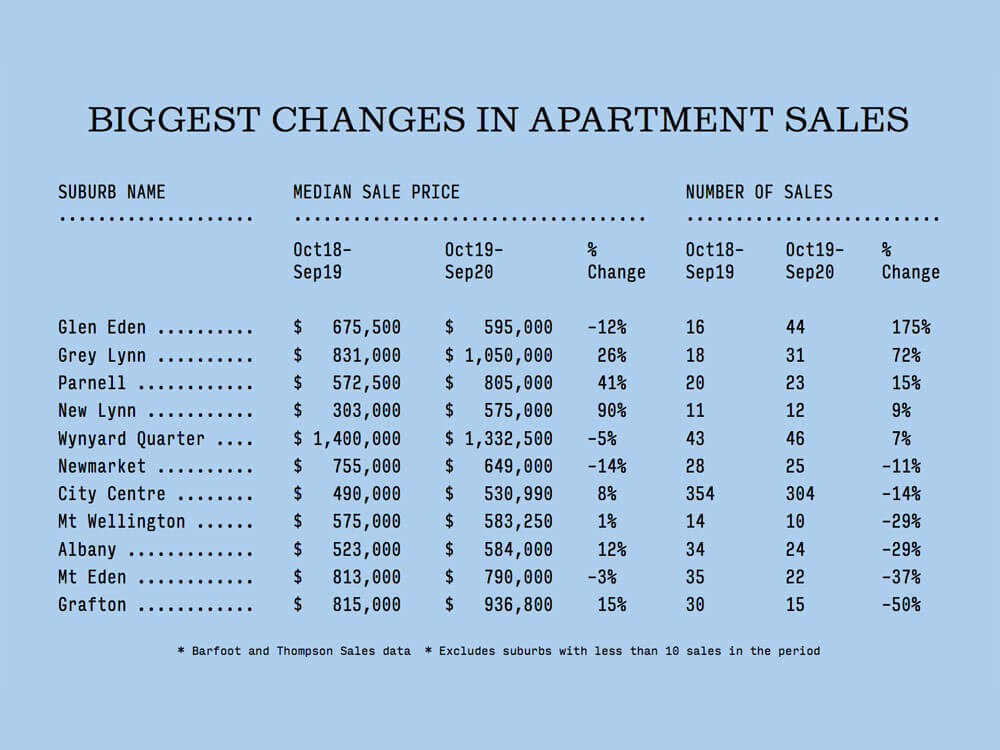 Urbizen by The Development Collective (TDC) in Mt Eden is an example of that shift and is designed for what director Bayard McKenzie calls the “missing middle” – middle-income professionals who want to live close to work, transport and amenities, but who don’t want a lawn to mow, or have property maintenance consume their time and income – yet who still value some of the attributes of traditional suburban living.

“The missing middle is a term we created that can be applied in two ways when it comes to housing our diverse community,” says McKenzie, who has a degree in resource and environmental planning from Massey University. “Firstly, we believe there is an entire population working in our urban areas that has been forgotten about when it comes to owing their own home. These are younger people – millennials – they are key-services workers, such as nurses and teachers, who are being forced into either rental accommodation or to the outskirts of our cities away from their places of work. As house prices continue to rise, these people are being left behind and struggling to own a home close to the city. It’s this demographic we’ve identified as the ‘missing middle’. The term also applies to a forgotten-about development type that doesn’t often appear in our urban areas – one that offers a contemporary, suburban-style lifestyle, with access to vegetable gardens, communal spaces or small outdoor areas, all while living in densely populated inner-city suburbs. There is large-scale, high-density, 50-plus unit projects and mid-density terraced housing, but there’s a development style that can sit nicely between both of those options,” says the 39-year-old, who has worked in the government and private sector.

Urbizen is a 21-apartment complex and the first personal project for TDC, which describes itself as a design-led property development company. The development is car free — apart from a shared electric car that’s available to residents — and has charging stations for bikes and scooters. Urbizen is close to Mt Eden train station, and is an example of how the Unitary Plan can work for a greater cross section of society. But Urbizen is not a one-off development, it’s a movement, says McKenzie, who kicked it off about three years ago. “The concept starts with the community and residents in mind, designing homes built for people who reside in them and not for the developer’s end game. Quality, architecturally designed housing solutions should be accessible to all, not just the top five per cent.”

McKenzie envisages a housing revolution to unfold over the next two decades as people adjust to the idea of high-density living, and as transport and commuter technologies advance. “Social connection and interaction will be placed more at the forefront of progress and urban growth, rather than pushed to the back in favour of the private vehicle. It’s an exciting time to be involved in the development space and I’m excited about challenging the status quo,” he says.

Another development that puts public transport at the doorstep for its residents is Westlight in Glen Eden. Located next to the train station, the new development has two 10-storey towers housing 75 apartments that rise above the urban sprawl, snapping up views to the city, out to the water and back west to the Waitākere Ranges.

Matt Baird, Projects Manager with Barfoot & Thompson, cites Westlight as the development that has put the real-estate company’s apartment sales figures exponentially higher compared to the same period last year. The increase of 175 per cent in Barfoot’s sales can be largely attributed to the mixed-tenure project by Kainga Ora and the Ted Manson Foundation. “It’s a good example of first-home buyers and downsizers taking up the opportunity to live close to transport and family,” says Baird. “It’s not something that people would’ve considered 10 years ago and is testament to the city growing up. These projects are typically offshore models and it has been uplifting to watch the mix of first-home owners and downsizers, who are typically local, move in.” When bought off the plans, apartments at Westlight typically ranged from $400,000 to $700,000.

Mary Chapman is not a millennial, but she’s done with commuting to her job in the city and the traditional family home. Chapman, who is in her early 50s, bought a top-floor apartment off the plans at Westlight with her husband Paul. The couple, who have two adult children, instantly recognised the appeal in living next to a train line that took them into the city. They moved from their former Silverdale home into their new two-bedroom apartment in November this year. “We really liked the concept and getting in on the ground of a new and exciting development, which is the first of its kind here. We love going to Eden Park for the cricket and rugby and we have easy access to glorious Piha, an excellent community, with a library, shopping and everything you need within walking distance. This is somewhere you can own and love – we have the best of all worlds – we are part of the city, but not in it. I work in the city, but it’s nice to be that bit removed and still part of the community,” she says. Their apartment has city and water views and cost them around $770,000, with body corporate fees of around $3300.

Baird’s job as projects manager is to act as a consultant to developers, and the company currently has about 20 projects underway across the city. While Barfoot’s end goal is to list and sell, they are involved right from the feasibility and concept stages. “We look for gaps in the market, give advice on demographic, price point, typology, level of fit out and we work with the architects and interior designers,” he says. It’s something Baird has been doing for 20 years and he’s heartened to see Auckland evolve from the shoe-box student-accommodation model to well-designed, quality, owner-occupier apartments.

“This second generation of apartments are better quality, and the likes of Wynyard Quarter has set a benchmark for the city,” says Baird, of the award-winning, master-planned neighbourhood designed by Architectus and built by Willis Bond & Co. As well as multimillion-dollar penthouses, the new neighbourhood has an entry point from $620,000 for one-bedroom apartments. Across town in another premium location is The Ridge in Mission Bay, which is designed for entry-level buyers, with one-bedroom apartments from $695,000 that are clearly marketed at singles.

Globally, the largest growth area for housing is a single-person household – it’s a major societal shift to which some developers are responding. Much like the transformational post-war programme, the changes taking place in urban housing represent a generational opportunity to meet the needs of current and future New Zealanders.

“There have always been suburban apartments on a smaller scale but there are now larger developments and more of them being proposed across Auckland,” says Baird. “While investors are looking for the next hotspot on the horizon, owners are more interested in how their home will improve their lives. The people who buy in the suburbs tend to live there and access to public transport links is a key driver.”

With Kiwibuild’s inability to deliver on promise, the Government realises how difficult it is to build houses in New Zealand and is certainly under pressure to resolve affordability and add diversity to the ecosystem. The Housing New Zealand subsidiary HCL (Homes, Land, Community) has a directive to deliver a mix of state, KiwiBuild and affordable open-market homes. The organisation has a 10-year, $30 billion plan to develop a range of sites for a range of people across Auckland – from Hobsonville to Māngere. At Hobsonville, the sale of one-, two- and three-bedroom homes operates on a ballot system to owners who agree to live in the house for at least two years. Axis Series’ homes cost from $450,000 to $650,000, depending on income thresholds.

With state developments and community housing providers capturing only a very small percentage of buyers at one end of the market, and new developments gaining ground across the city, a minority of individuals have been creating their own solutions. Developments such as co-housing projects follow international models of pooling resources to design and build quality, sustainable, community-driven housing. Cohaus in Grey Lynn is a 20-unit co-housing project that is due for completion next year. It’s another example of a genuine shift in thinking — from homeowners balking at the thought of a shared driveway on a cross-lease, to sharing resources and facilities, such as gardens and electric cars.

With Auckland in the throes of another runaway boom, the more progressive the approach from developers, the state and private individuals, the more healthy our housing eco-system will become.

This article was created in partnership with Barfoot & Thompson.