An intriguing apartment building is taking the lead on luxury living in the heart of Auckland.

This article is published in the October 2016 issue of Metro, and is created in partnership with The International. Illustration by Gary Venn for Metro.

To be one of the first to see inside The International, book your place at Metro’s free preview event, hosted by editor Susannah Walker and featuring a panel of design leaders including Rufus Knight.

Inner-city life is changing. The emergence of a new breed of luxury apartment buildings is helping to bring central Auckland into a vibrant 21st century.

One such development is the retrofitted historic Grand Hotel at 9 Princes St, now called The International. The hotel’s façade was kept when a 15-floor office tower was built in the late 1980s. The complex is now set for another new lease of life as an upmarket apartment development.

Although retrofitted, The International will look bang up to date thanks to a dramatic white exoskeleton that wraps the original building in a lattice of white steel.

Its 88 freehold apartments spread over 17 levels will ratchet up inner Auckland’s lifestyle quotient. Every person who moves into the central city and its surroundings boosts demand for restaurants, night and cultural life, the arts and all the service businesses that make CBD living better, says Tomasz Gibowicz, project architect of Jasmax, the architects.

Within 50 metres of The International are three other large apartment buildings: the Pullman Hotel, which has serviced apartments, The Quadrant and The Connaught. Within 100 metres there are 2000 apartments, making it a vibrant area, says developer Gary Groves. The draw to apartment dwellers of this quarter along the ridge above central Auckland includes the gardens of Old Government House, Albert Park, Auckland Art Gallery and the 2016 Metro Peugeot Restaurant of the Year, Cassia. Many of the apartments have views over the parks or across the Waitemata Harbour.

Owners will get the fixtures and fittings they’d expect to see in a high-end home in the suburbs.

Gibowicz describes living in city apartments as “neither black nor white”. Suburban life, he says, involves going home from the “white” of your work life, closing your door to the world and shutting yourself in the “black” of your home life. In an apartment development, you might go home and then pop straight out again into one of the shared spaces in your building. “The semi-private amenities extend your private realm beyond your apartment door,” says Gibowicz. “It’s the grey space between work and home.” 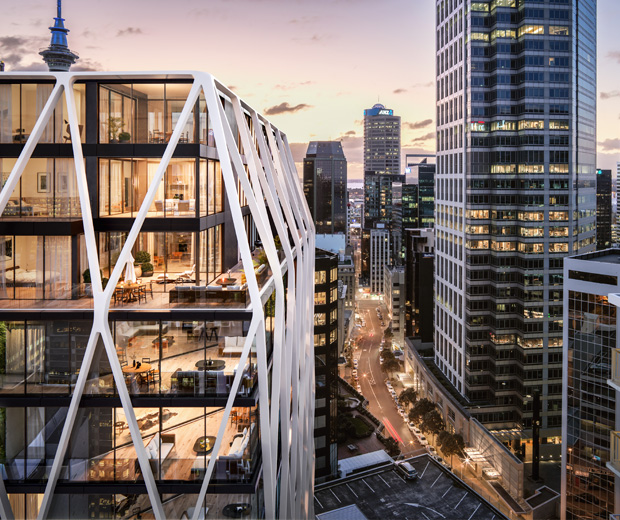 Few apartment buildings boast the fixtures and fittings you’d expect in a luxury home. The International has taken a different approach to luxury. Instead of aiming to make the fit-out “luxury apartment style”, the intention, says Rufus Knight of Knight Associates, the project’s interior architect, is to make the apartments feel like home. Owners will get the fixtures and fittings they’d expect to see in a high-end home in the suburbs.

Knight was employed to bring his signature cool, calm style to the interior spaces. The International is the first of Groves’ projects that Knight has worked on. The story goes that Groves visited the Lonely Label lingerie store in Ponsonby and was so impressed with the fit-out that he tracked Knight down to Belgium and lured him back to New Zealand for the project.

Knight says natural materials were used wherever possible. “We felt this was quite a strong position to take,” he says. The default option for most apartment buildings is more economical surfaces. Where possible, such as in the kitchens and bathrooms, natural timber and stone have been used. “It has quite a personal feel to it and it is quite bespoke,” says Knight, who loved the concept so much that he has bought one of the apartments for himself.

The apartments will have a similar living-space footprint as they would in a suburban home, without the hassle of garden upkeep and external maintenance. The International’s corner apartments range in size from 147sq m to 211sq m. At 211sq m, some of the three-bedroom apartments are in fact bigger than the average suburban home, says Groves. It’s not just about the footprint. The apartments, he says, have very high ceilings and potential buyers should compare the cubic metres, not square metres, to take into account the 3m-high stud. 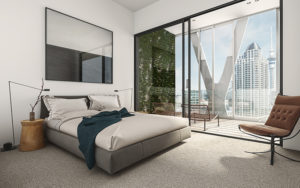 Retrofitting older buildings isn’t new in Auckland. A steady stream of erstwhile office buildings have been turned into apartment living in recent years, often fitted out to a very high standard. Examples include the St James and Parklane apartments and more recently the Hereford and Hopetoun Residences.

The advantage of the retrofit approach is that former office buildings often have higher ceilings than a new-build apartment and the balconies are built in rather than out. In the case of The International, rather than balconies, there are 43sq m “conservatories” in each of four corner apartments on every level. The conservatories form part of the living space. Huge sliding doors open up to 7m wide. There is a frameless glass balustrade for safety.

Some of the apartments are bigger than the average suburban home.

Knight says it’s this type of amenity and aspect Kiwis are looking for when they buy apartments, instead of the dense living in overseas cities. “We are fortunate in New Zealand to be able to achieve that,” he says. “We’re not just building apartments, apartments, apartments. We’re making it appeal to people who have previously lived in large, quality homes in the suburbs.”

Groves adds that 10 years ago, the market wasn’t mature enough for luxury buildings such as The International and other developments being built at Wynyard Quarter and elsewhere. 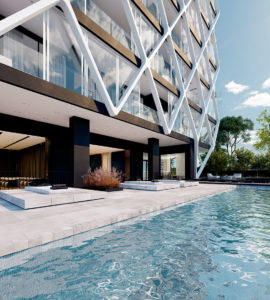 The other big difference between suburban living and luxury city apartment living is the amenities. The International will have a concierge who will be able to assist residents and book some of the amenities, which will include a private wine cellar and tasting room, outdoor terrace with heated pool, and gym. When the street-level cafe closes at night, the space will remain open to residents as a shared social area for them and their visitors.

A private dining room will seat up to 20 friends or business associates and be booked through the concierge. A library will provide a quiet hideaway, and a cinema and/or the wine cellar will offer the perfect environment to sit back and unwind after a busy day in the city.

Groves is at pains to point out that unlike the last generation of apartment buildings before the global financial crisis (GFC), high-end apartment buildings are now possible. The economics of the last boom and a lower level of demand from owner-occupiers meant that numbers just didn’t stack up for a development such as The International. Smaller apartments were the norm before the GFC and appealed very much to investors. 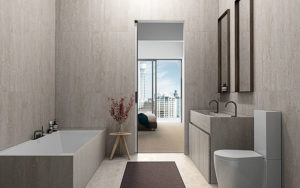 The maturity of the apartment-living market means that developers are daring to offer higher-quality buildings aimed squarely at owner-occupiers. Groves says the price tag means it’s unlikely that landlords will be snapping the apartments up for their yield (percentage of rental income for the purchase price) and cash flow. The body-corporate rules will exclude leases of less than six months, which will deter landlords letting to short-term guests. Ironically, however, Groves believes capital gain will be greater on high-end apartments.

Gibowicz says another big difference in apartment builds between now and 10 to 15 years ago is the vast improvement in the quality and technology of materials, building automation, and the ability to model the building in 3D through the entire design process. Modelling technology included thermal analysis, which enabled Jasmax to simulate the building’s performance and apply custom-made thermal solutions for different sides of the tower.

Automation means that the build will involve much more precision than a similar project would have had 15 years ago. That makes it more robust and reduces costly waste, says Gibowicz.

Groves says many of the materials used, such as heat-reflecting low-emissivity (Low-e) glass, and sealants used to make the structure watertight, simply didn’t exist 15 years ago. 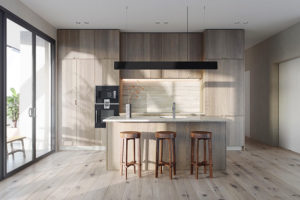 Other high-tech features will include “intelligent” doors and lifts. “When a resident walks home from dinner at Cassia, the front doors will recognise her from a proximity sticker and will open,” says Groves. “As she approaches the lift, the lift door will open and take her to her level.” The front door to her apartment will also be keyless and will open automatically when it detects her approaching. Once inside, she will be able to use her built-in intelligent sound system and enjoy the heated floors.

One advantage of a new build or retrofit apartment block is that it must meet the Building Code, including standards for earthquake and fireproofing, which have been significantly improved since the Christchurch earthquakes. The International scored 310 per cent of the Building Code requirement for seismic resilience. “I didn’t believe the rating [when I bought the building],” says Groves. It turned out, however, to be “built like a brick outhouse”, he says.

Also exceeding the Building Code by a factor of three are the acoustic ratings, making the apartments “whisper quiet”.

It’s not just empty nesters who are buying in The International. Knight is just one example of younger professionals who are looking forward to moving in once the construction is completed.

To be one of the first to see inside The International, book your place at Metro’s free preview event, hosted by editor Susannah Walker and featuring a panel of design leaders including Rufus Knight.