Caro DeCarlo and Jackson Nieuwland didn’t expect their crowdfunding campaign to be successful. “We were planning on what we could do if we got close to the goal,” says Nieuwland. “Like, do you contribute your own money to reach it? We had this whole plan.” In reality, they met their target in five days, and then fulfilled their stretch goal as well, allowing them to not only open their book store, but start publishing some books as well.

Both writers, DeCarlo and Nieuwland have been together for 10 years, meeting online through writers’ groups and forums while DeCarlo still lived in the United States. With a couple of others, they’d formed Food Court, a reading series based in Wellington. “That was about giving space for writers who don’t have an opportunity to share their work elsewhere,” Nieuwland explains. “We plan to continue having readings here, but also selling books only by small and independent publishers. It’s the same ethos of giving a spotlight to things that don’t get it otherwise.”

The idea for Food Court is that it’ll eventually expand into a model commonly seen in the US — as well as a store, it’ll be a writers’ centre with office spaces and workshops. There’s already a little bit of that there, with places to sit, and a greyhound curled up in the back corner. “We’ve got coffee and tea and sometimes snacks,” DeCarlo laughs. “We had one person come in yesterday who we gave a cup of coffee to, and I think she looked at every single book in the store. We want people to feel comfortable doing that, to come in and not feel intimidated by the space and by the books.”

The space had been sitting empty for a year, so Newtown locals were understandably happy to see something occupying it. Some of them even gave to the Boosted campaign, circulated amongst local “Newtownians” through Facebook groups, word of mouth, and people seeing the distinctive green-and-pink exterior being painted in the lead-up to the opening and stopping by for a chat.

When we talk, they’d been open for only about for about a month, but had already held launch parties for Hana Pera Aoake’s A Bathful of Kawakawa and Hot Water, and LitCrawl events featuring, amongst other things, Dominic Hoey and Joshua Solomon’s new collaborative zine, Bad Advice for Good People. Zines are generously stocked at Food Court as well.

After meeting their crowdfunding stretch goal, DeCarlo and Nieuwland are excited to be able to publish, too, especially things they say they naturally gravitate towards — voices they feel should have a bigger presence in New Zealand now, like queer writers, indigenous writers, and translations. “The stuff when they’re submitted to bigger presses, they say, ‘Well, we don’t really know what to do with this’. We feel like we do,” DeCarlo adds. The scene is getting more diverse, they say, with a lot of smaller presses — like Lawrence & Gibson and Compound Press — leaning into different niches already. But there’s still a gap that needs to be filled. 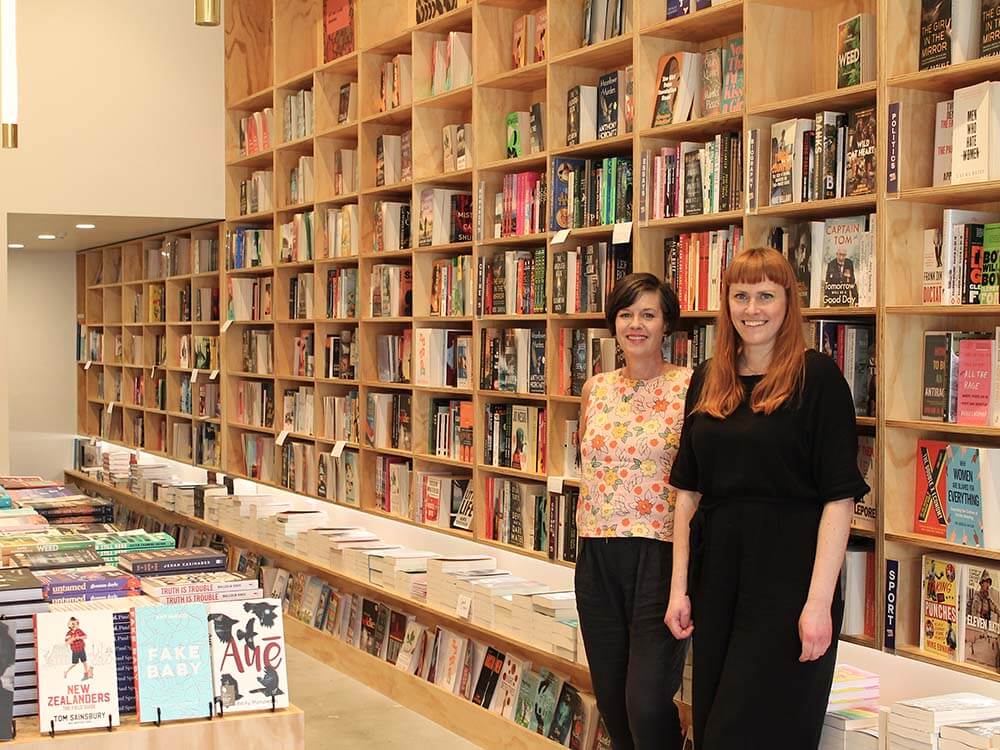 “I saw another bookshop in Wellington for sale and tweeted, ‘Oh my god, can someone buy me this?’ Semi-joking, of course,” says Jane Arthur. “Then Catherine messaged me, ‘Hey, let’s talk.’”

It’s the ultimate modern-day origin story. Three months on from that first tweet, Arthur and Catherine Robertson have opened Good Books, a small bookshop on Te Aro’s Jessie St. It wasn’t the bookshop Arthur originally tweeted about (their offer was unsuccessful) but it’s a bookshop all the same, located right across from Wellington brunch institution Prefab.

Arthur and Robertson met in 2015 at Victoria University (both were doing a masters in creative writing) and, between them, have years of bookselling, publishing and writing experience. Despite everything (i.e. the pandemic), they’d seen book purchases continue to trend upwards, which meant that, ultimately, opening a shop still felt like the smart thing to do. “Even with lockdown stopping book sales for however many weeks it was, overall sales are still up in the book industry from the year before,” Arthur says. “It feels like people are really connecting with mindful activities.”

It could also be down to the fact that Wellingtonians still remember when, about a decade ago, inner-city bookshops were closing one after the other. The only other innercity bookshop left is Unity Books on Willis St. “We didn’t want to be their competitors, because they’re awesome,” she says. Good Books is smaller and more select than Unity, “so you can come in here and maybe not get quite so overwhelmed with choice”. Their selection is mostly “by gut”, with the process shaped by their philosophy to stock only books they know they can sell. “People come in here and know that these are the ones we vouch for.”

Their Top 20 list heavily features books by New Zealand authors, with their top-selling book, as of December 2020, being Victory Park by Wellington writer Rachel Kerr. “Lots of writers are based here, so that helps — it’s kind of like an ecosystem, which is very supportive. I think the tides are turning on that sort of cultural cringe, you know, thinking New Zealand stuff isn’t as good as overseas.”

Arthur is most proud that Good Books is New Zealand’s first living wage-accredited bookshop. “That’s made a difference, because we’re getting online orders from around the country from people who want to support us because of our ethics.” The fact that they’re the first poses a problem for Arthur and is reflective of the sustainability of the overall industry. “It’s been 12 years since I’ve been in book retail, and since then the prices haven’t changed. A novel is still $35, and it’s been $35 for 20 years.”

With the margins shrinking, Arthur says they have to come up with smart ways to make profit elsewhere, such as launching an in-house range of limited-edition merchandise

. But it’s the books that really matter to Arthur. “People who work in books are there for the love of it. I got away from it all and spent the last five years wanting to get back into it.