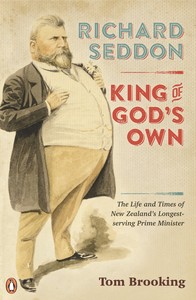 About a week before his seventeenth birthday in June 1862, a Lancashire lad named Richard John Seddon boarded a boat in Liverpool sailing direct to Melbourne. The young man worked on the gold-fields and railways in Victoria for about four years. And he met his future wife, Louisa Spotswood, there.

In late 1866, the lure of a new gold rush brought him to the then ‘scruffy town’ of Hokitika (not long, one notes, after the setting of the fictional events in Eleanor Catton’s The Luminaries). A hard-working family man, Seddon got involved in local politics on the West Coast, and eventually became a member of the House of Representatives. In September 1892, following the death of Premier John Ballance, Seddon became caretaker Premier, and later consolidated his leadership of the Liberals (and of the government) after their 1893 election victory.

Professor Tom Brooking’s account of Seddon’s life is a fairly dense read, but it rewards the effort thanks to its wealth of detail and insight. Occasionally the reader gets lost due to a lack of reference to guide the way. But the depth of scholarship in this biography is undeniable and it will be a standard reference on Seddon and the Liberals for a long time to come. Researchers who are unwilling to tackle the whole text will find the chapter and section headings, as well as the meticulous index, helpful in identifying useful passages.

What struck me about the Seddon story is the sheer scope of events and issues that this man tackled in his busy life in politics. He clearly had a genius for knowing when to lead and when to follow public opinion. At the early stages of his political career we see him concentrating on a few narrow issues such as gold duties. But Seddon possessed a sharp intelligence that took on new issues and dealt with them vigorously. Opposed to the universal franchise at first, for fear that women would derail his progressive policies, he embraced it once it became inevitable. The Liberals were duly rewarded by women voters at the subsequent election.

Among many achievements, Seddon can be credited with a key role in forging New Zealand’s party-political system as we now know it and seeing through legislation (for instance the Old Age Pensions Act 1898) that has been critical to the very formation of our society. He was Premier at the time when New Zealand declined to become a state of the Commonwealth of Australia. If anyone was a nation-builder, Seddon was.

There are many myths (positive and negative) about this extraordinary man. And Prof Brooking reassesses his life and legacy through a carefully considered account, steering a path between hagiography and ‘presentist dismissal’ – a ‘rebunk’ as he puts it. Brooking’s conclusions about Seddon’s relationships with Maori, for instance, will challenge current stereotypes. Although Maori can accuse the Liberals of advancing the alienation of their land, Brooking sees Seddon as laying the foundation of the bicultural approach that (despite critics) has worked so well for us.

The Chinese community feel justifiably aggrieved over the racially discriminatory policies of those days. And anyone who is allergic to state control of anything will dislike the Liberals too, for quite different reasons. But the Liberals were pioneers of social legislation; and their progressive reforms earned New Zealand its reputation as a ‘social laboratory.’ Seddon’s vision was for a more egalitarian society. He translated a popular liberalism, current in England in his youth, to these shores and put it into action. His practical and oratorical abilities, and his determination to communicate directly with the people, earned him huge popularity. But, like two of our other most revered Prime Ministers (Savage and Kirk), Seddon’s life came to an untimely end while still in office. He died suddenly, at sea on his way home from Australia, in 1906.

As we commemorate the centenary years of World War 1, much will be made about how warfare supposedly forged New Zealand’s ‘identity’, whatever one means by that. This book reminds us how much was already achieved by the Liberals in the 1890s and early 1900s. Over a century later, New Zealand has benefitted from, but also reneged on, the Seddon vision. We have become a nation that serves privilege again and that treats its worst-off members with neglect or even disdain. So we should thank Prof Brooking for thoroughly re-examining Seddon’s life. Compliments are due also to the publisher for a handsome hard-bound volume with high-quality paper. This is a book built to last, in more ways than one.