Stop Tweeting and Do Some Work!

Janet Malcolm’s new book provokes the question: why don’t our own best writers do more in the media?

I got asked to eat cat food on television the other day, by a gifted writer who said he’d be doing it with me. I said no, but I hope I didn’t deter him from trying it himself.

Actually, what I really hope is that he writes it up and gives it to this magazine to publish. He’d be insightful about what eating cat food on TV might tell us about ourselves, and he’d be funny too.

But he won’t do that. He, like way too many of the really good writers in this country, can’t be bothered writing for mainstream media anymore. He’s happy enough to tweet.

Meanwhile, there’s an essay on my desk by another writer, who has been fretting about whether to adopt this or that mode of writing. It’s a writing exercise about a writing exercise, by someone who has been hothoused in one of the country’s university writing programmes, and is both beautifully written and dead on the page.

I found it a little bit irritating. Not entirely because of the subject — I believe you can write well for a general readership about anything, if you’re good enough. But if a writer does want to share their writerly concerns with us, they need to make them fascinating and they need to draw larger themes and ideas from them. My would-be contributor was unable, or perhaps unwilling, to do either.

Do I blame the writing courses? I don’t know. I’m not privy to the ways they value writing. Do they praise a raft of elegantly turned phrases that do not compel readers to care about the subject? Or do they see that as a disappointing waste of talent?

And now, here’s Janet Malcolm’s Forty-one False Starts, a wonderful collection of essays largely focused on the 1980s New York art scene. That may sound as unpromising as, “Oh dear, what’s the best kind of writing to do right now?”, yet you don’t have to be an art aficionado to love this book.

That’s because Malcolm knows how to speak to a wider audience. She illuminates her topics with a frank, witty gaze and a superb grasp of storytelling, and she treats them as a springboard to larger themes.

In this collection of writings on “painters, photographers, writers and critics”, mainly from the New York Review of Books and the New Yorker between 1986 and 2011, she keeps asking, What is it to be famous? What is it to be good at what you do? What is the relationship between personality and talent? What do we value, in people and in art, and in the wider culture? Throughout, she describes things as simply and precisely as she can, and yet for all the clarity this brings, she knows — and never lets us forget — that she may not be seeing them clearly enough. 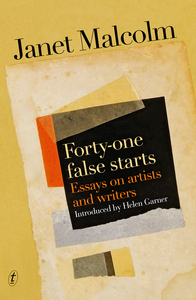 The title piece is a long profile of the artist David Salle, and offers a masterclass in observational writing. In the 1980s, Salle was the king of New York, the successor to Warhol, but by 1994 when the feature was written his status was in decline. He was also practised at hiding his inner life and — to Malcolm and many others — a very charming man.

The piece is, literally, 41 fragments, each one supposedly the start of an article about Salle. That makes it a kind of homage, as the artist’s own work uses collage and found images. It’s also a prompt to the reader: to keep thinking about how stories are constructed, about the interplay between liking someone and trying to assess the value of what they do, about the slipperiness of “truth”.

It is, in other words, full of writerly concerns. But it’s also full of something else. Malcolm admires Salle’s paintings but cannot decide where they sit in the culture: his nudes are not porno­graphic, she believes, and are so originally conceived they may have reinvented the role of the nude in art, but they are also demeaning to women. For her, discussion of art is also a discussion of life. Such a provocative pleasure to read.

That’s also true for most of the dozen or so other essays. A lovely piece on the Bloomsbury set explores the intensity of Virginia Woolf’s love for her sister Vanessa Bell, and asks how much their fascination with themselves is responsible for our own fascination with them. A cool appraisal of the photographer Diane Arbus provides an insider’s guide on how to look at a photograph.

The central work, “A Girl of the Zeitgeist”, is a fabulous account of the struggle between establishment and upstarts in Manhattan’s art world. It’s riveting, largely because its characters leap so bewitchingly from the page: “John Coplan’s loft… has the look of a place inhabited by a man who no longer lives with a woman.” It’s a story about so much more than egos and paint.

There’s also her New Yorker piece on Gossip Girl from 2008. Malcolm loves the books, hates the TV series, and wrote, controversially, in direct opposition to another New Yorker writer who had it the other way round. This is Janet Malcolm at her most instructive. Shooing away condescension, applauding quality where she finds it, in popular culture as in high art, critically awake not just to themes and values but to her own responses to the work.

Malcolm is not like Chris­topher Hitchens or Clive James. She doesn’t preach or satirise, and although she likes to have us know there’s a wild girl inside her, she has never paraded her intellectual virility as a metaphor for any other kind of virility. Unlike James and the Hitch, she does not spray the page with phero­mones.

Nevertheless, she belongs, with them, to a proud band of great writers on both sides of the Atlantic who have committed themselves primarily to journalism — to feature writing, essays, columns and reviews, much of it long-form — as a means to share their talents. Caitlin Moran at the Times, Ta-Nehisi Coates and Caitlin Flanagan in the Atlantic, James Wolcott in Vanity Fair, take your pick from the Guardian and the New Yorker, and reach back to earlier decades too, to the George Orwells, the Lynn Barbers, the Norman Mailers… My point being, all you cat-food eaters and anguished writerists, why are there so few — so very, very few — local equivalents?

Is it too hard to write really good stuff for the media? “I hammer it out sentence by sentence and it takes a long time,” Janet Malcolm told the Guardian in 2011. It’s supposed to be hard.

Is there not enough money? Of course that’s true, although it shouldn’t be, but is that really the problem? We still pay better than novels.

Lack of “cultural support”? I hear that quite a bit, and it’s nonsense. I’m asking why our good writers — novelists and journalists alike — do not do more to evolve a vigorous, insightful and entertaining intellectual milieu in this country, and the answer has nothing to do with the “philistine” pressures of rugby, racing and beer, pavlova paradises and the dumbing-down of TV current affairs.

Original writing in this country is strongly supported by publishers and taxpayers. It has been valued in our schools since the 1960s and taught at university since the late 1970s. In the print media, there are as many outlets as there ever were: the Listener, committed to good writing since 1939; this magazine since 1981; North & South, the Sunday Star-Times, the metropolitan papers, a shifting lineup of smaller publications. If you want to write and you’re good enough, you’ll get published.

So why do we have no Janet Malcolms, no Caitlin Flanagans, no New Yorker-types like Adam Gopnik, Atul Gawande and Judith Thurman? Why do almost none of our best writers trouble editors with proposals for investigations, essays and reports from the trenches on the lives we lead?

For many years now, at one magazine or another, I have received occasional contributions from “leading” writers. Sadly, they do not aim high. There are some wonderful exceptions, and I’m very proud to publish them. But “top” writers, in my experience, are more likely to get lost in obfuscation or just toss the piece off.

Why so few Janet Malcolms? I think it is because of academic snobbery about journalism. And because we — the people who want to read good writers engaging with the world — don’t demand it. And because, like my friend with the cat food, too few of our writers can be bothered. Twitter, it seems, provides satisfaction enough.

I chaired a session with the Australian novelist Wayne Macauley during the Writers & Readers Festival. In his second book, Caravan Story, hundreds of artists are sent to a rural retreat, from where the actors, painters and musicians go out and find employment. But not the writers. They scribble away by day, writing stories that go straight into the rubbish overnight. No one wants their work.

What’s the point of a writer? It’s not just to write. Macauley’s story is a parable about a world in which writers survive on government grants even though no one reads their work. But writers do have a job: to entertain us, to provoke us into greater engagement with and understanding of the world, to help us come to terms with ourselves and to upset our complacency when we do that too comfortably… Writers have lots of jobs, and most of them can be done in the media.

I think it’s pressing. This country needs more good writing to reach a wider readership, and it also, if I may be so blunt as to say it, needs magazines and newspapers that are worth reading.

So, guys. Stop tweeting. Do some work.