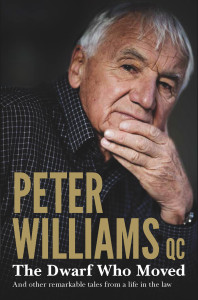 As you might expect, New Zealand’s most prominent criminal barrister, Sir Peter Williams, QC, has a treasure trove of stories from his long career and a raconteur’s fluency in the telling.
Part-Rumpole, part-Dickens, he draws from his casebook a rogue’s gallery of 30 or so characters, each of whose story is told in a way that suggests much polishing at dinner parties and during afternoons on Sir Peter’s yacht.

It’s reminds us what a colourful underbelly New Zealand has had. Strippers, politicians, drug dealers and Scientologists all strut their stuff, along with poets and the wonderful Mr Uganda, the Ponsonby spiritualist. Winston Peters, not sur­prisingly, makes several appearances. The dwarf in question is part of a circus act in which his wife would shoot a cigarette out of his teeth at 30 paces. (Moving was clearly not a clever thing to do, and it had its inevitable consequences in court.)

Sir Peter also gives us his take on some of the more disturbing cases he has dealt with, such as the Arthur Allan Thomas investigation and the persecution of Ballu Khan by the Fijian military junta, cases which demonstrate how easily power can be abused and how crucial it is to maintain a cadre of fearless legal advocates.

The most trenchant criticism is reserved for the prison system, which he railed against for decades as president of the Howard League for Penal Reform. A legacy of poor design, unenlightened management and government policies that pander to redneck sentiment, rather than hard evidence on what works, mean that our prisons fail the community they are supposed to serve. In the process they traumatise their inmates and often equip them for little more than a life of marginalisation and, inevitably, reoffending.

In spite of this bitter tone, there is a touching humanity to many of Sir Peter’s stories, a sense of real connection, warmth, friendship, good humour and decency amid the tragedy, the folly and the farce.

My favourite? The one in which Sir Peter and his young family welcome a notorious murderer, shortly to be paroled, as a house guest for one night to help him adjust to normal life. At 5am, the hosts hear the man sneak out of the house, and though they fear he has absconded it turns out all he wanted to do was stand on the porch outside and stare up at the night sky, which he had not been able to do for decades. As Oscar Wilde put it, “We are all in the gutter, but some of us are looking at the stars.”

Peter Williams QC will be a guest of the Auckland Writers Festival, May 13-17, Aotea Centre. writersfestival.co.nz