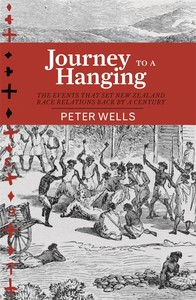 What goes through the mind of a condemned prisoner before the axe falls or the trapdoor opens? Peter Wells builds up to this question in his latest book, Journey to a Hanging, a careful and utterly absorbing re-examination of a most lurid episode in New Zealand history.

Two hangings are referred to by the book’s title. The first is the infamous killing of Reverend Carl Volkner in Opotiki in 1865, and the second is the execution of the man said to have given the order for Volkner’s killing, the Maori prophet Kereopa Te Rau, who was hanged in the forecourt of the Napier Prison.

The hanging of the unfortunate reverend by members of his own Whakatohea neighbours, and the ritual desecration of his body afterwards, was an atrocity that electrified 19th-century colonists, not just in New Zealand but also in Britain. Breathless accounts of how Volkner’s eyes were eaten, his blood drunk and his head hung from the pulpit of his own church at Hiona were splashed all over the London papers, feeding a growing horror of New Zealand’s savage natives.

None of the awfulness of poor Carl Silvis Volkner’s fate is lost in Well’s meticulous collation of his sources. First-person testimonies are woven together to present a heart-stopping account of the chaos and confusion that distinguished the last few miserable hours of this well-meaning but misguided clergyman who was in exactly the wrong place when a tinderbox of sectarian and tribal tensions ignited one Friday in March, in land-war-ravaged Opotiki.

Well’s portrait of Kereopa Te Rau, leader, prophet and possible scapegoat, is just as painstaking, although the source material is rather more of a challenge: it’s easier for a 21st-century reader of more pacifist sensibilities to get their head around the mindset of a German missionary than a warrior-prophet called The Eye Eater.

But Te Rau’s last mo­ments are masterfully evoked; the condemned in his cell with the bishop beside him, urging him to shrive his soul, the prisoner so addled by fear of what is to come that he can no longer understand English. Sometimes the best histories are those that don’t try to paint a big picture, but depend on small moments such as this to illuminate their subject.