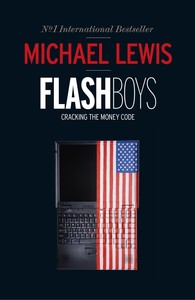 Michael Lewis, in my view the best popular non-fiction writer of our age, is happiest when he’s found a canary in the coalmine, someone who cuts left when all around are marching right.

In his debut Liar’s Poker, he was the canary, documenting the machismic madness of 80s Wall St. Since then he’s tackled early internet culture (The New New Thing), baseball (Moneyball, later made into an adequate movie) and the web of low-quality assumptions and incentives that birthed the Global Financial Crisis in The Big Short.

All those works of narrative non-fiction told of complex systems, established orders and the people who discovered the seams through which the future would flow. Flash Boys’ canary is Brad Katsuyama, the founder of IEX — a US stock exchange which (though not even a year old) has functioned as something like kryptonite to the murky, lucrative world of high-frequency trading, more commonly known as HFT.

Largely by stealth, HFT had managed to use a variety of techniques, most revolving around unimaginable speed, to take a tiny gain on nearly every sale in the US stock market. They exploited the differing deals on offer at US stock markets (there are dozens, mostly trading the same shares with different incentives) and made a killing.

(Lewis fails to note that the amount gained on each transaction was not all that different to the so-called “Tobin tax”, which has been proposed and largely shouted down in recent years as a method of redistributing some of the proceeds of financial markets. It would have been interesting to see that point pressed upon certain protagonists.)

Katsuyama is a classic Lewis hero — an outsider with an unerring moral compass, and a rare sense of how his world interacts with the real world. He rose sharply in the Royal Bank of Canada, a small, relatively benign Wall Street player which, through its meekness, was assured of staying relatively small compared to the big swinging dicks on the scene: the Goldman Sachses, Morgan Stanleys, Merrill Lynches.

They are a cast familiar to all the classic accounts of high treason in American business of the past 30 years, cropping up in Liar’s Poker and The Big Short, and also in the likes of Enron: The Smartest Guys in the Room and Barbarians at the Gate.

Flash Boys can be read as the latest instalment in this long-running saga. The wiliest of those banks even turns out to be both a hero and villain within.

Usually, one of Lewis’ great strengths is his ability to translate arcane financial sector activity into ideas plain enough for the rest of us to understand. Unfortunately, that’s not so much in evidence here. The algorithms and arbitrage exploited by HFT appear immune to translation — they’re so abstruse that few on Wall Street understood their full implications. This is partly because HFT skimming was so delicate that it amounted to the smallest taste of every major transaction, spread across billions of trades. A real problem, but well dispersed.

A consequence is that some of Lewis’ outrage can feel over­inflated. There is always the suspicion that the victims here are not so much the ordinary investors and retirement fundholders (whom one would presume buy and hold their stocks), as the old-school Wall Street traders, being exploited by a newer generation. Cry me a river.

Things pick up when the action switches to real time. The characters emerge from the code, and the thrill of Katsuyama’s team launching IEX, which has the effect of shutting the HFT firms out of the trading loop, takes over the narrative.

While the outcome is very much still in play, Flash Boys, for all its malign characters, contains the reassuring sense that HFT — which had its seeds in both deregulation and regulation, and once had a genuine shot at creating another financial meltdown — was a crisis both created and resolved by the vilified citizens of Wall St.