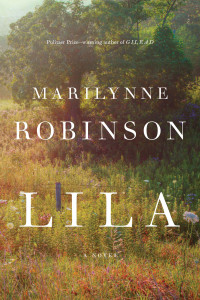 And did you get what
you wanted from this life, even so?
I did.
And what did you want?
To call myself beloved, to feel myself
beloved on the earth.
Raymond Carver

I’d pick this Carver quote as an epilogue for Lila if I could, though Marilynne Robinson’s new book also tackles the deeper things religion is concerned with, the meaning of existence, of human life.

Her books are the literary equivalent of slow food, serious and profound. She once had a gap of 20 years between novels; the last two have been closer. She won a Pulitzer prize for Gilead and the Orange Prize for Home.

Her narratives are interested more in what you can live without (most things, actually, except food, shelter, love — and the greatest of these is?).

Lila is a character who appeared in Robinson’s previous two novels but was given no lines. In those earlier books, she appears out of nowhere, a stray, a woman who embodied loneliness and grief and hunger and as such made a fitting biblical metaphor, coming in from the cold.

If you’ve read those earlier novels, this story reads as a kind of piece to camera. It tells how Lila, having lived a life of poverty and wearing “shame like a habit”, comes to be living in Gilead, married to the preacher — “a big silvery old man” twice her age and close to the end of his life.

She enters the relationship with not so much a change of clothes as a suitcase full of troubling memories. He enters it with the foreknow­ledge of his life running out. How do you carry what you love into the next (figuring there is one)?

While we learn about Lila’s past (somebody is cut, somebody goes to prison, the smallest of things are given attention: a man’s jersey becomes a thing of comfort), Lila learns about the Bible.

To practise her handwriting (she only ever had a year at school), she copies out passages and, though the texts are both exalting and bewildering, she finds no trouble understanding the queerest things — the Book of Job, salted babies, sparkling calves’ feet, because they make as much sense as anything else. No sense.

She knows there are worse things than being poor. “Poor was nothing, tired and hungry was nothing, but people trying to get by…” She reads Ezekiel: “Thou was cast out in the open field… I said unto thee, ‘Though thou art in thy blood, live; yea.’” And she begins to understand what salvation could mean. “It was Doll taking her up in her arms that way. Live. Yes. What then?”

Robinson casts a marvelling eye on nature — the stars and the crickets, the firmament, the light, the clouds, the winds, the rain, the thunder and lightning — all with an equanimity and a sense of the sublime that feels like a benediction yet can summon a sentence like this: “And what a look he gave her in the sorrow of his happiness.”