A Thoreau for the South Pacific, but funnier. 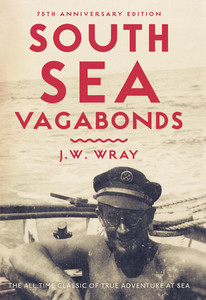 One of my anarchist grandfather’s favourite books was Henry Thoreau’s Walden. On my 18th birthday, my grandfather gifted me a copy, along with a few heavy hints that he would soon be expecting deep philosophical discussions on its contents.

A few days later, I was dutifully ploughing my way through Walden — in the university library between lectures — when somebody quietly slid a book onto the table beside me.

“Noticed you were reading Thoreau,” whispered a middle-aged librarian. “Have you read South Sea Vagabonds? It’s sort of the New Zealand version of Walden — but funnier and a bloody sight more interesting.”

Under the librarian’s expectant eye, I opened the book, read a sentence — and fell in love. The rest of the afternoon’s lectures were forgotten; I read until the library closed. Then I continued reading in the library car park, under the orange glow of my car’s interior light, until the book was finished.

South Sea Vagabonds is an account by Johnny Wray of the building of his boat, Ngataki, during the early 1930s. The 21-year-old Wray loses his job at the height of the Depression and decides to drop out of the struggle for employment. He constructs an ocean-going yacht of his own design — made from kauri driftwood that he collects on beaches in the Hauraki Gulf.

There are obvious parallels with Walden: Thoreau builds himself a cabin; Wray builds himself a boat. But there are also huge differences in scale. Thoreau takes his pontificating walks around neighbouring farmland; Wray sails to Australia and the Pacific Islands, cavorts with women, barely escapes a shipwreck, and finds love.

You read Thoreau with a thoughtful frown; you read Wray with a grin. Both books are a celebration of anti-conformity, but an irrepressible skein of joy runs through Wray’s writing — joy in being young, joy in hard physical labour, joy in being outside conventional society. He has none of Thoreau’s ponderous intellectualism. South Sea Vagabonds is Walden without the wank.

Over the past 150 years, countless people have credited Walden for a re-evaluation of their lives — but South Sea Vagabonds has also convinced a surprising number to make radical changes. I know half a dozen people who have built boats and sailed the Pacific under the influence of Wray. I know of others who have found Wray’s freedom through different paths: a house-trucker in Southland, a canal boater in Yorkshire, an American who “dropped out” to live Thoreau-like in the Northland bush after falling under Wray’s literary spell.

When overseas visitors ask for something quintessentially New Zealand, I give them South Sea Vagabonds. Johnny Wray’s story contains all the essential ingredients that we perceive as comprising our national character: ingenuity, self-reliance, kindness, humour, fairness, a desire to be outward looking and explore the world, but also to appreciate New Zealand as home. Johnny Wray explains us.

As a literary work, South Sea Vagabonds feels so thoroughly alive and contemporary that it’s a shock to realise it’s been 75 years since first publication. The new 75th anniversary edition contains an excellent introduction by Bruce Ansley (though first-time readers would be advised to leave it until the end), additional photographs and two chapters that were left out of some previous editions.

If you haven’t read the book yet, you urgently need to do so. If you haven’t read it for a while, you should remind yourself just how outstandingly good it is. And no one explains it better than Johnny Wray himself: “[This book] is written for the man who works in a city office and dreams of sparkling blue waters and coconut palms and white sails bellying to the warm trade winds. It will, perhaps, show him how it’s possible to break away from the ties of civilisation, build himself a boat and sail in her wherever he wills.”