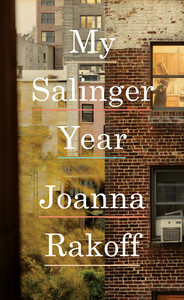 The nicest thing about My Salinger Year is how you can’t really date it. This charming book is set in 1996, when Joanna Rakoff went to work at a literary agency, but the New York she evokes — full of high rises and subways, fancy hotels and tiny apartments — doesn’t seem to have changed much since Esther Greenwood from The Bell Jar spent 1954 mooching around it.

The ghost of Sylvia Plath flits through this story. Rakoff did her thesis on Plath, and comes into work early to type out her own poems. She also adopts Plath’s Smith College era outfit of “neat skirt and sweater” as her work uniform, just like all of her fellow publishing assistants.

Her recollection of her time spent as dogsbody to an agent who represented the reclusive J.D. Salinger, among others, has a darker twin in Plath’s published novel. Both are semi-fictionalised memoirs of girlhood, both have clever anxious heroines who seek solace in reading.

Ultimately, it isn’t books that help Rakoff find her place in the world, though, but letters. Part of her job at the agency was to deal with the massive volume of fan mail sent to Salinger.

Instructed to respond to these with a form letter, she begins to draft personal answers. The correspondences that ensue owe much to the spirit of Holden Caulfield, by turns funny, heartbreaking and running the full gamut of human weirdness.

Rakoff describes it all, as well as her own dawning sense of adulthood, with an artlessness that wins you over, but it’s Salinger himself who is the real star of the show. “Jerry” was famously deaf but persisted in phoning his agents, and her transcriptions of their shouted phonecalls are hilarious.