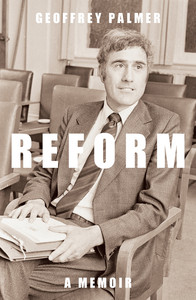 If dry and ponderous writing were a crime, this 750-page book (plus meticulous fifty-page index) would be evidence against its author. As an aggravating factor, the accused admitted to Kim Hill that he could have written twice as much. Does he lack empathy for his victim, the general reader? Could he not have spared us his poetry?

A book that quotes whole sections from statutes and spends seven pages summarising Political Philosophy 101 will soon cause mental injury. Readers who don’t know ‘the rule relating to the destructibility of contingent remainders’ obviously weren’t paying attention and Sir may have to use the cane, causing even further injury.

So, if you enjoy making others feel intellectually inferior, then this is the ideal gift. But it’s not all such hard going. Chapter 2, on Sir Geoffrey’s great-grandfather who settled in Waimea West in 1843, is a great slice of colonial New Zealand life. The chapter on high-school years in the nineteen-fifties at Nelson College vividly evokes that old British-inspired model of education and the values that it instilled in this talented young man. And if you want a brisk account of how Cabinet works, go to chapter 20

Sir Geoffrey is not one for introspection, and his memoirs are about achievements great and small, but mostly great. Only occasionally is there a personal insight. He mentions that, as a boy, he could be ‘a bit of a pest with relentless and persistent questioning.’ Later on, his future wife, Margaret, refused to take his notions of marrying her seriously; but the young Geoffrey ‘persisted and succeeded.’ Is a pattern emerging?

Sir Geoffrey’s persistence has led to many significant and enduring achievements. He took up Sir Owen Woodhouse’s plan for the ACC and helped to make it a reality. (A pity he didn’t take up Sir Owen’s admirably clear prose style.) He identified Muldoon’s abuses of executive power, and then went into Parliament and reformed the law to try to prevent such abuses from being repeated. He represented New Zealand at the International Whaling Commission. He set out a plan to reduce the social harm caused by alcohol consumption. The list goes on.

Naturally he recalls (but surprisingly briefly) the heady days of economic reform when he was Deputy Prime Minister in the fourth Labour government. Sir Geoffrey does not much regret those neo-liberal economic policies other than the unpopular privatisations; but he disapproves of the deliberate speed of Roger Douglas’s approach. Can he have it both ways though? The Treasury in those days held to a dogmatic theoretical model, but Sir Geoffrey appeals to that poorly examined ‘pragmatism’ that New Zealanders so often fall back upon. While he has a fine-grained analysis of the law, Sir Geoffrey is much less rigorous on the ‘Rogernomics’ reforms that he was a party to.

Even now, though, it’s saddening to read about the breakdown of the Lange–Douglas relationship. Palmer describes his genuine efforts to hold that government together as his ‘greatest failure in politics.’

Sir Geoffrey could have avoided politics, however, for a much more lucrative career in law. Or he could have enjoyed a tenured academic life in one of America’s finest law schools. Instead he chose – or was driven – to make a genuine difference to New Zealand society. He may not be a great writer, but he has given this country great service, and always with a socially responsible aim in mind. It’s a pity that law and politics don’t breed more like him. At heart he is a ‘persistent and successful’ reformer. We should thank him for that.