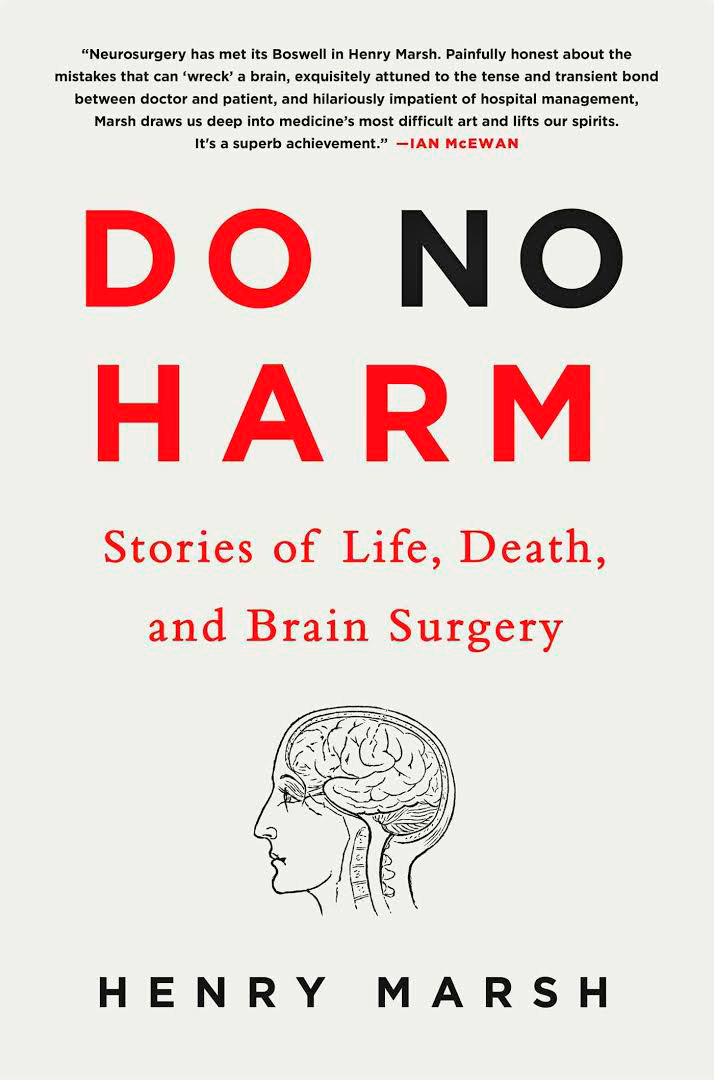 “There goes God, he thinks he’s a surgeon” is the old joke. Do No Harm is the work of a man hell-bent on clearing up any confusion between the two.

“Doctors are human just like the rest of us,” writes renowned British surgeon Henry Marsh on the first page of this extraordinary book. It’s an uneasy truth, made even more uncomfortable when the doctor in question is a neurosurgeon. The mistakes he makes can rob his patient not only of motor skills but also of speech and comprehension.

Scientists call this “the binding problem”, the mystery of how consciousness and sensation are created by a lump of pinkish grey matter inside our skulls.

Cutting into that lump of matter is a huge responsibility as well as an undeniable power trip, a duality the author acknowledges in the preface: “A brain surgeon’s life is never boring and can be profoundly rewarding but it comes at a price. You will inevitably make mistakes and you must learn to live with the occasionally awful consequences.”

Nor does he stint in describing those consequences. Marsh’s candour is shocking — he’s told at least one family to sue him, and he provides a detailed litany of men and women, boys and girls he has left paralysed, disfigured and profoundly damaged in the course of his career.

He calls them “wrecked”, a term he admits to nicking from his subordinates — deliberate casualness being a hallmark of the grim humour that pervades doctors’ slang, just as it does that of paramedics, soldiers and others who live with trauma. Language doesn’t allow escape, but it can offer a shared release.

For Marsh, the guilt and shame of having to face wrecked patients is the most traumatic consequence of an operation gone wrong. “They… looked at me afterwards with the same terrible dumb anger and fear, a look of utter horror… the look of the damned, in some medieval depiction of hell.”

The cumulative effect of passages like this — and there are plenty — compounds the irony of the book’s title and highlights the professional paradox: the only way to become a good brain surgeon is through practice, but every single surgery carries with it a terrible risk. The only way to guarantee doing no harm is to do nothing at all.

Revelations like this are as hard to look squarely upon as the gory surgeries Marsh performs. It’s frightening to think of a life-or-death operation as the crude, noisy unpredictable enterprise he describes, terrifying for the surgeon as well as the patient.

We don’t want to know, but for Marsh it’s too important for us not to know, and for him there is what he calls an obligation: to bear witness to his past mistakes.

As shocking as it is to read of the limits of medical expertise, of how so much of this much-vaunted vocation (“it’s not brain surgery…”) amounts to literal and figurative groping around in the dark, Marsh’s relentless inquisition is deeply life-affirming. He gives us his vulnerability, his pride, his anger, his shame and most of all his fear, and through all of that his humanity shines.

The empathy he feels for his patients, the dignity and respect he accords each one, makes this roster of skulls sawed open and stitched back up so much more elevating than it might have been.

That’s never more so than in the chapter where he farewells a dying young man for whom he can do no more. He said to the man, “It’s been an honour to look after you.” It left me weeping all over the couch.

Henry Marsh will be a guest of Writers Week, part of the New Zealand Festival in Wellington, March 2016, festival.co.nz

This article was first published in the January 2016 issue of Metro.