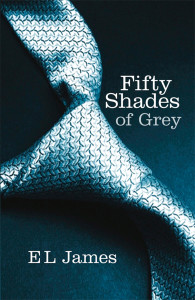 This review was first published in the June 2012 issue of Metro.

Top three spots on the New York Times bestseller list. Intense grappling for the film rights. The usual onanistic analytical frenzy re What Women Want, not to mention a spurting forth of many brilliant parodies. It’s zeitgeisty, all right. But are the books themselves as jizzy as the hype they’re shackled with?

One of the author’s many annoying habits is describing her characters’ annoying habits: Anastasia bites her lip on every second page, which turns Christian on every time. (She also comes with two annoying internal characters — a prim subconscious and a wanton inner goddess. I desperately hope the film will feature them both in cartoon version.)

Against the backdrop of that highly pornographic location  the Pacific Northwest, Anastasia and Christian speak like Victorians. “I shudder to think what could have happened to you,” he murmurs, and, “I feel like the sun has set and not risen for five days.”

She says even more stupid stuff, like: “Normally I hate energy-saving bulbs — they are so dim — but being naked here, with Christian, I’m grateful for the muted light.” Has Al Gore signed on for the audio version? And while the story appears to take place in the 21st century, Ana seems never to have owned a cellphone in her life, let alone touched herself, you know, down there (don’t expect pussies, pricks and cocks in this story, although Ana does have her very own “Christian Grey-flavoured popsicle”). Magically, Christian earns “roughly one hundred thousand dollars an hour” (which helps pay for the housekeeper who cleans his bondage gear), despite spending most of his working hours strapping women to spreader-bars in his Red Room of Pain.

In other words, the books are an inflated, badly written version of Harlequin romances (the sexier imprint of Mills & Boon). The thing about those books — I have read a few — is they’re funny. The heroines have interesting lives and senses of humour; the men are genuine bad boys. Whereas this guy has Britney and Coldplay on his iPod.

Of course, the joke may be on us. I reckon E.L. James (the pen name of former TV executive, now millionaire first-time author, Erika Leonard) is completely aware of her shortcomings as a writer, and lets us know it via her characters.

My guess is millions of readers are sticking around for the sex. But is it any good? Well, there’s plenty of it. Lips are always hungry. Mouths groan in defeat. Christian “pours himself into” Ana, an anatomical miracle. There are no fanny farts, yeast infections or dry spells, and only one period in three books. Anastasia is comically able to reach screaming orgasm Every Single Time, although in disturbing ways: “I detonate around him,” she reports, “like an incendiary advice”; elsewhere she feels herself “splinter into a million pieces.” (Messy stuff; thank goodness for that housekeeper.)