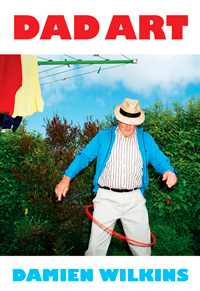 Performance art turns up again at the heart of Damien Wilkins’ new novel Dad Art.  It is Wellington in 2015.  The flag debate is happening; National is changing benefit rules; John Campbell is ousted from TV3.

Meanwhile, Michael, middle-aged and recently divorced, is beset by intimations of mortality: his father’s dementia is erasing the family memory bank; a neighbour dies, then a workmate; and when we first meet him, a lesion is being excised from Michael’s chest, threatening at the very least his internet dating career (what woman wants her sex served up with a whiff of death?).

Into the mix flies his art-student daughter, Sam, who has volunteered to be roped to another artist, Matiu, for several months (it’s a longish rope, and part of the deal is they never touch).

It’s a work of “endurance-based” art, not original (Linda Montano and Tehching Hsieh did it first in the 1980s, they explain), but logistically cumbersome when it comes to the mundane tasks of daily life, especially hygiene and meaningful father-daughter chats. As I found with Dick at the cafe, Michael realises that he is part of the performance.

His every move and word, from his initial patience, through his attempts to suppress annoyance or explain the situation to his puzzled father, to his eventual angry outbursts, are as much part of the art as Sam and Matiu’s umbilical cord.

It’s an idea both silly and profound, mirroring exactly Michael’s sense of being tied to others, but separated, and wondering why he feels constrained from touching.  Conceiving of your life as art, he learns — although not great art — allows us to see things we’d otherwise miss.

This is a short novel, slight even, but deft, and it adds to the list of likeable, though not quite admirable characters with which Wilkins has charmed readers for two decades: competent, scrupulous about their social and familial duties, but knocked off their perch into the uneasy condition of emotional outsiders.

If it’s a formula, it’s one that works, because it throws up something new and insightful each time, like those second-tier characters in Shakespeare — Enobarbus in Antony and Cleo, perhaps, or Beatrice in Much Ado — who, if we gave them a little attention, would steal the show.