The hard graft of memoir, and the rewards.

First published in the April 2015 issue of Metro. 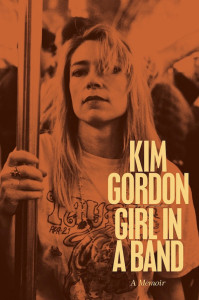 What’s the secret to writing a good memoir? Fill it full of famous people? Tina Fey knows this. So did Ernest Hemingway. Bossypants and A Moveable Feast both set a gold standard for personal reminiscences, which isn’t hard when your combined circle of friends includes F. Scott Fitzgerald and Amy Poehler.

But when it comes to connectedness, Sonic Youth founder Kim Gordon is more than capable of giving both Fey and Hemingway a run for their money. Such is the plethora of big-name anecdotes in Gordon’s Sonic Youth memoir Girl in a Band, from putting on fashion shows with Marc Jacobs and discovering Chloe Sevigny, to going with Michael Stipe to introduce her infant daughter to William Burroughs, it basically does double-duty as an A-Z of bleeding-edge culture.

Reviews of the book so far have tended to focus on the explicit details Gordon provides of the breakup of her marriage to fellow Sonic Youth-er Thurston Moore (Yes, he cheated; yes, she was furious). But it’s Gordon’s thoughtful, understated account of her years of fruit­ful collaboration with her former husband that makes this book unputdownable. That, and her collaborations with what seems like pretty much every other important music-and-visual artist of the late 20th century American avant-garde, from riot-girrrl heroine Kathleen Hanna to the artist Gerhard Richter (it’s his candle on the front of Daydream Nation).

Yes, she’s angry, but the ire is directed mostly at deserving targets: Lana Del Rey gets it in the neck, along with Moore; so too do Courtney Love and the British media. The book’s title comes from “What’s it like to be a girl in a band?”: the sexist question she always got asked by English journalists. 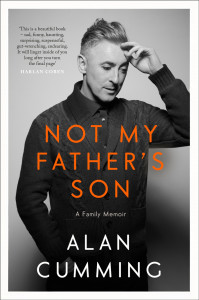 There are not enough famous people in Alan Cumming’s book, apart from two good stories with Patti Smith in them. One involves the High Priestess of Rock ’n’ Roll losing her rag at the prospect of having to do a charity duet with Mary J. Blige, the other involves her spitting at a clothes shop opening. As anecdotes go, they’re not exactly “Hemingway and Fitzgerald comparing willy size” in terms of juicy, but they’re enjoyable enough to make you wish there were more of them.

It’s his background that makes him such a perfect outsider-in-the-VIP-tent.

But the death of his grandfather is already the subject of a documentary, the actor did one of those BBC shows where celebrities search for their roots, so it’s arguable whether it needed a whole book devoted to it as well.

He’s a very good writer, equal parts wry and direct as it’s called for but, considering what he does for a living, it seems reasonable to long for a touch more stardust, even if it’s only to find out what Julianna Margulies is like to work with. 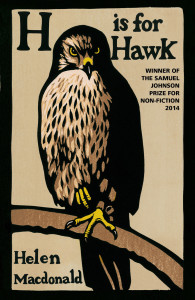 Helen Macdonald doesn’t have any celebrity mates, but she’s a good enough writer to be able to turn a hawk into a rockstar. Mabel, the goshawk Macdonald bought with a bundle of £50 notes on a dockside in Scotland, is the centre of this story, which isn’t a memoir so much as an unprecedented blend of biography, nature writing and literary history.

The subject matter amply showcases her gift for writing about the natural world. The mix of poetry and naturalist’s precision with which she renders her hawk makes for gorgeous prose — “the feathers down her front are the colour of sunned newsprint, of tea-stained paper, and each is marked darkly towards its tip with a leaf-bladed spearhead, so from her throat to her feet she is patterned with a shower of falling raindrops.”

Meanwhile, an undercurrent of grief at the death of her father gives this story an intensity not normally associated with the annals of animal husbandry, as Macdonald sets to her task of training Mabel with an obsessive dedication that finds her traipsing through the countryside, pockets bulging with the frozen corpses of baby birds. Talk about a moveable feast. Hemingway would have approved.