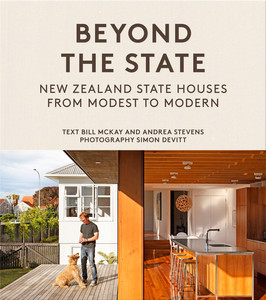 On the cover, a man plays with his dog on his deck. Behind him is the back of what once was a state house: white walls, tin roof, a window of nine lights. But beside the deck is a kitchen in wood with a huge bench and bar stools. The inevitable David Trubridge thing hangs from the ceiling.

Here in the one photograph of the one house are two different worlds. The state house was one of many built to the same design, this one in 1939. The kitchen extension was designed by Paul Clarke and built in 2012.

Here is a book with an unfortunate title — Beyond the State sounds like a libertarian manifesto. It is nothing of the kind. The subtitle is not much better: New Zealand state houses from modest to modern. It should have been the other way about. The state housing project of the first Labour government was modern, and bold.

Huge resources were committed to solving the housing crisis and to provide decent homes for ordinary people. Houses were built to standard plans designed by the government’s architects; the one on the cover is a Design No 6/899. The government’s planners created entire suburbs of these houses. It was a modern way to deal with modern problems.

Now we live in more modest times, where the state does not want to get involved in the property market and has little response to our present housing crisis, beyond providing a few incentives as a step onto the property ladder.

Meanwhile, some not-so-ordinary people have found something they like in former state houses. Their aims are modest as well: to preserve their houses or to extend them enough for modern living.

While the vulgar rich demolish and rebuild, these people adapt or leave things much as they are. They seem nice.

The house on the front cover with the extension at the back is one of the more ambitious projects, a “house of two halves”, as the text says. But even that other half is hardly visible from the street. That seems to be the thing to do: add something unobtrusive, nothing that would upset the neighbours, nothing flashy.

Some of the houses have hardly been touched at all. Marie Shannon lives with her son Leo in a Design No 646 in Waterview, a house full of books and art, largely unchanged and still with at least one original Bakelite light switch.

Jack Sprott lives in a brick cottage in Palmerston North he bought in the mid-50s. In Hayes Paddock, now a Hamilton City Council Heritage Precinct, Katie and Alan Deare make a pot of tea in their kitchen.

This is a book of two halves. The modern stories, written by Andrea Stevens and photographed by Simon Devitt, are in the second half. The first comprises Bill McKay’s history of public housing in New Zealand, the most comprehensive yet written. He tells the story of state houses, railway houses and the planning of suburbs on the garden city model. He shows that state houses were meant as “homes for all”, not for welfare. Only in the 1950s did that change, with a National government encouraging home ownership and selling houses to their occupants, leaving as state tenants only those who could not afford to buy.

This book, despite its title and cover, is not a triumphalist tale of middle-class people buying and improving houses. It is more a story of people living in houses, making them their own. Some rent, some buy. Some extend, some preserve.

There is something peculiar about such claims as, “The heritage precinct of Savage Crescent in West End, Palmerston North, remains virtually intact, with most homeowners maintaining the garden suburb as it was first designed.” It seems that owners have taken on the responsibility of preserving the appearance of public housing, long after the neo-liberal turn has privatised most of it and stigmatised what remains. The state house suburb has become a site of modest pride, where owners hold on to the remnants of the public estate.

Good on them. This is a refreshing book, free of the smugness of some magazines, free of perfect couples and their flaxen-haired children, of infinity pools and inspirational messages on kitchen blackboards.

Simon Devitt’s photographs are sympathetic to the houses and their inhabitants. Andrea Stevens tells their stories. Bill McKay tells the bigger story.

All in all, this is a good solid book, about good solid houses and the people who live in them.

Beyond the State: New Zealand State Houses From Modest to Modern by Bill McKay and Andrea Stevens. Photos by Simon Devitt. Published by Penguin, $75.