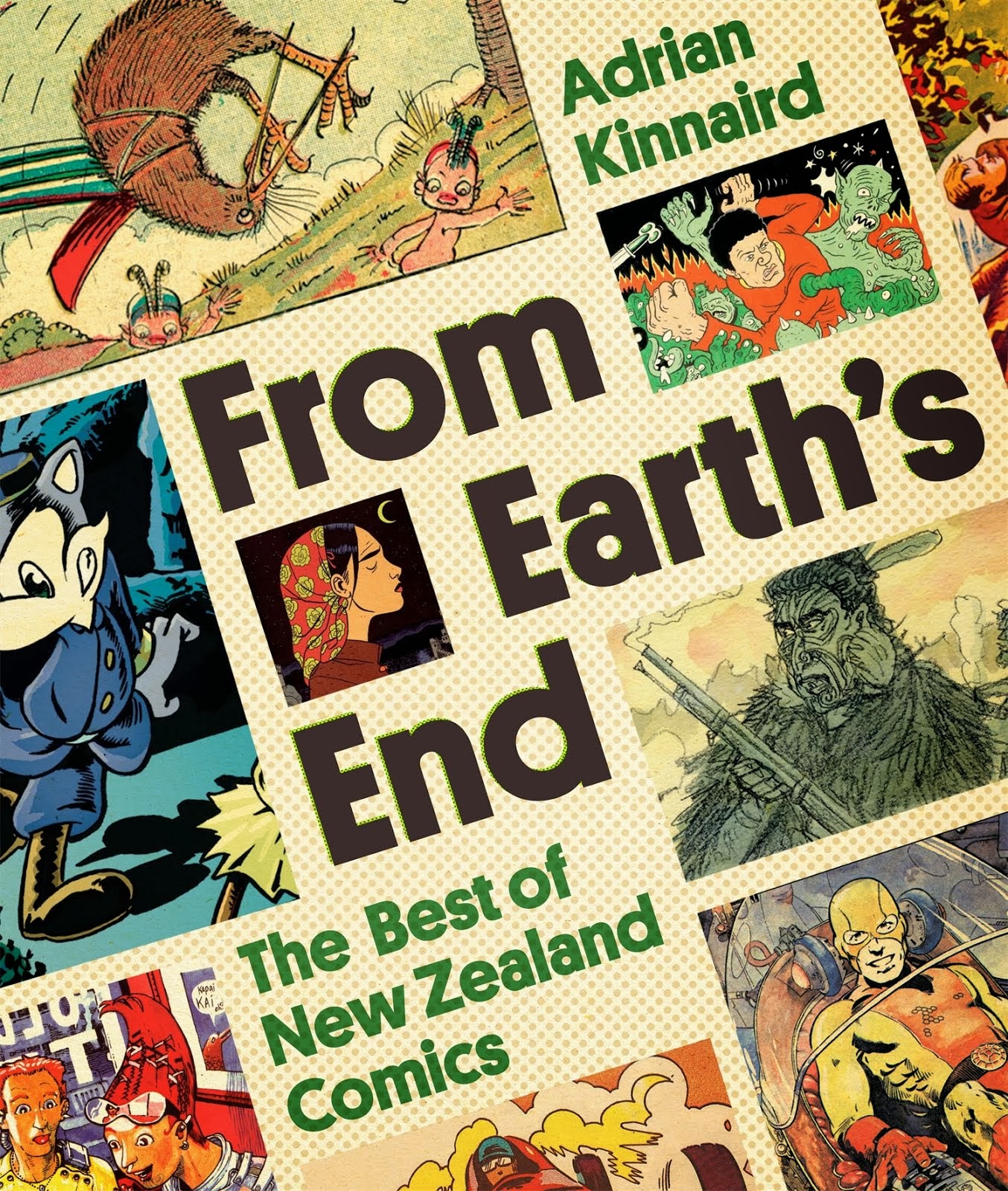 From Earth’s End: The Best of New Zealand Comics
by Adrian Kinnaird (Godwit)

The story of comic books in New Zealand is one of boom and bust: a first flush of success in the early 20th century that created a thriving industry and vibrant culture, which was then destroyed by the moral panic of the 1950s, before a new wave of avant garde artists and underground comics emerged in the 1960s and 70s.

It is a story of individual brilliance and obsession, of bedroom zines and cupboard comics shops. It is a story of community collaboration, of scenes and waves, and a DIY aesthetic that colours so many of our indigenous subcultures.

It is all these things and more, and From Earth’s End is the first real attempt to discover, gather and assess this fragmented, diverse and thrilling medium that has remained unacknowledged by the mainstream for so long.

The book is based on a blog of the same name run by designer, writer and comics artist Adrian Kinnaird, and it is an achievement of great beauty – a satisfyingly weighty paperback filled with colour and a breadth of imagery and concept that is truly breathtaking. This book belongs on a coffee table where it can be stumbled across and dipped into, with new discoveries waiting to be made on every page.

However, From Earth’s End would also be at home on the bookshelf of any art historian or cultural critic as a comprehensive history of a marginalised subculture. Seeded by the burgeoning comics industries in the US, UK and Europe, New Zealand comics quickly developed their own voice and vision during the 1920s, 30s and 40s, with early artists such as Noel Cook and Eric Resetar taking the forms of comics art developed overseas and adapting them for a local audience. The Tee Wees’ Adventures by D Price couldn’t have been made anywhere else – native fairy folk with names like the Kowhai Fairies and Pohutu Pixies featured alongside the young warrior Tai Ho and a cast of indigenous flora and fauna. Later, Crash O’Kane: An All Black on Mars did exactly what it said on the tin.

The moral panic around the horror and violence depicted in many popular comics destroyed the thriving comics industry that had been built in New Zealand and all but wiped comics off the map in this country. It wasn’t until the 1970s and 80s that comics were reborn as an underground medium, with the Strips publication disseminating the work of local avant garde artists such as Barry Linton, Judy Darragh, Chris Knox and a young Dylan Horrocks. Strips laid the groundwork for a renaissance in local comics, and small-press publications, student magazines and the arrival of the internet have provided an outlet – if not a paycheck – for talented local artists ever since.

From Earth’s End is a history of comics only in its opening section – the centrepiece of the book is 30 profiles of current comics artists with reprints of their work, and reveals a contemporary comics culture that is frankly astounding in its beauty, wit and variety, from the conceptual work of Draw to the sweet, simple moments of Timothy Kidd. The work of well-known artists such as Chris Slane, Dylan Horrocks and Roger Langridge sits alongside that of lesser-known artists and the subject matter runs the gamut from sci-fi and superheroes to autobiography and history. A highlight is Captain Sunshine, an environmentally-conscious superhero who was dreamt up by Colin Wilson to sell sundial watches in 1979. The comic may have commercial roots but it is artistically a triumph, with vibrant gouache washes colouring an epic and absorbing storyscape.

From Earth’s End offers a comprehensive introduction to local comics and a vivid snapshot of what comics look like in New Zealand today. However it also leaves several questions unanswered. I would like to have seen a more thorough introduction to the book, explaining the gestation of the original blog and the process behind turning it into a book, as well as explanations for some obvious issues such as the comparative lack of women cartoonists, both in the book and in the history of Kiwi comics itself. But fundamentally, it offers a version of where we’ve come from and where we are on the comics landscape – the question is, where do we go from here?

Comics anthology Faction seeks to provide a possible answer. Published as a glossy serial by local artists Damon Keen and Amie Maxwell, Faction publishes comics by artists working in a range of genres and media. The result is weird, funny, beautiful and a little disturbing, and reading it conjures up something of the magic readers must have felt 75 years ago when opening the pages of Tintin, Eagle or Action Comics and discovering whole new way of seeing the world.