There is always a moment of disbelief when you see how the other half — well, the one per cent — lives. At King’s School’s new $30 million Centennial Building, designed by Warren and Mahoney, the gasps keep coming. It begins at the new entrance off Portland Rd, Remuera, which proceeds into an impressive four-level atrium corridor with criss-crossing bridges, beside a voluminous, acoustically perfect music room.

The school band is pounding away on something that sounds both zippy and stirringly triumphal, possibly military. For a primary school, says headmaster Tony Sissons, the music is as good as you’ll hear anywhere in the world.

Cue a quick lecture on how learning a musical instrument builds pathways in the brain. “So why would a school not invest in music, as just one example?” asks Sissons. “Our five-year-olds start learning the violin and cello. The Year 8s are playing saxophone, guitar and drums. Every boy learns a musical instrument, every boy learns a second language, every boy goes to science, every boy goes to physical education.” He forgets to mention art, but every boy does that in a specialised area, too. 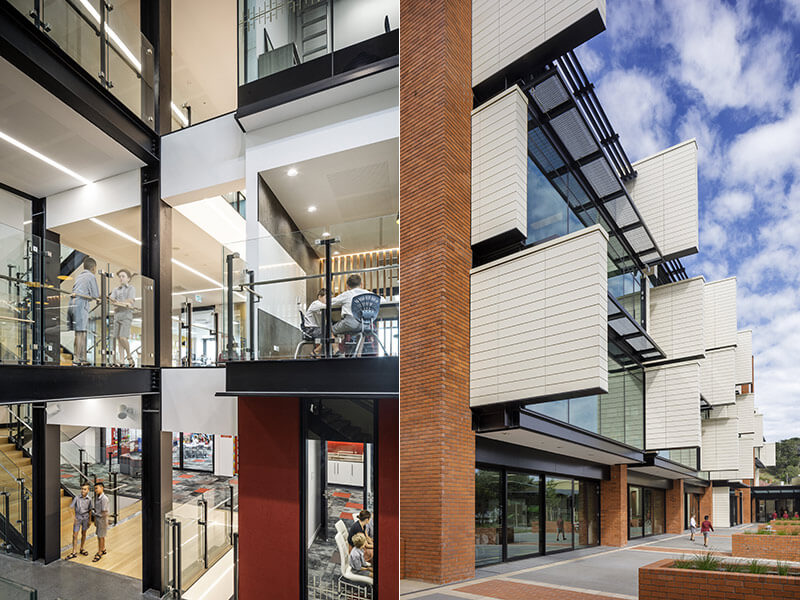 Looking sharp in crisp white shirt, lilac tie and pinstriped grey suit, Headmaster is understandably proud of his new domain, but also a little defensive. “Some would let you believe we are traditional and therefore archaic in our educational thinking, and I would challenge that.”

Well, you could argue that having an elite boys-only primary school like this is something of an anachronism, not to mention a bastion of the patriarchy. We don’t go there. Sissons is worked up about what he calls the open-plan structure that’s being pushed through at the state level. “There’s no research, not one bit of research at all, that would indicate that a big barn helps with the learning process. It doesn’t even make common sense, let alone in the educational sense.”

Yes, but that’s really a gross oversimplification of what “modern learning environments” (MLEs), aka innovative learning environments (ILEs), are — designs that put several classes together in multi-teacher layouts to maximise collaboration between teachers and encourage student-directed learning. In other words, encouraging flexibility as a feature of all spaces. Sissons does have something of a point if you look at the research as to how well the notion of collaborative teaching corresponds to open-plan classrooms, because you can have one without the other. It’s also seen as a bit of failed experiment because many of the big, open-planned educational environments that were tried in the 70s in New Zealand have since had their openness reduced and partitions added.

What you get at King’s School is in fact very MLE, except that it maintains a rather old-fashioned one-class/one-teacher model designed around a homeroom for core subjects. But it isn’t anything like a traditional classroom. Square in plan and generous in space, the smallest being 80sqm and the largest 110sqm, the rooms have no obvious front or back of the class, and one glass wall opens to a panoramic Waitemata view, from high on the Remuera ridge, out to Rangitoto. Teaching in the space is very free form, with bespoke Furnware furniture — moveable circular teaching lecterns and a variety of tables, chairs and stools — enabling the teacher to set up class in myriad formats.

Sissons says it’s all designed with the teacher-boy relationship as critical and sacrosanct. “It encourages teachers to be engaging with the student, moving through the class rather than sitting at the front.”

Opposite the wall with the view are large sliding glass doors that open onto a wide corridor and adjoining flexible breakout spaces, populated with further funky lounge-like furniture and which might be used as collaborative teaching spaces.

What becomes evident here is how the circulation space is employed not just for movement from homeroom to specialised learning spaces for art, science, music, etc, but also for breaks and generalised hubbub and to and fro — places in which noise, interruption and ambient activity are seen as positives for informal learning and social gathering, rather than distractions. Sissons talks a lot about flow and how boys need to move, but also about the calming effect of the spaces on the boys. “What you see now is boys purposefully moving. They are on the move. They know where they’re going. We know boys.” 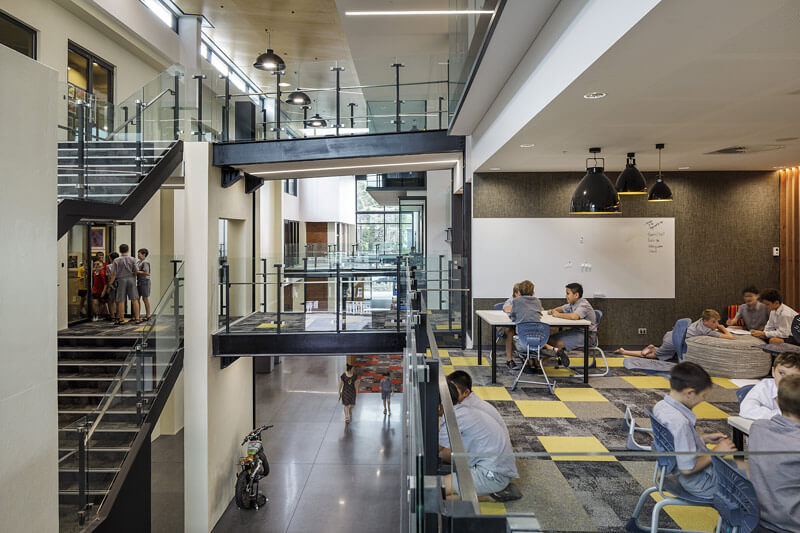 Notable distractions along the way include specially designed water stations, where boys can fill their environmentally friendly drink bottles — in house colours — with cool filtered water. Then there’s the big fish tank, where each boy can have and name a fish, and the Lego table — both apparently suggestions from the boys that were included in the design.

Is there something state education can learn from private education about school design? Undoubtedly. Spaciousness is good — these 19 new classrooms and music rooms comprise, with all their additional breakout spaces and circulation, 5000sqm. So are student-teacher ratios. King’s operates at 1:11, which is strictly maintained in the early years but allows for larger classes (up to 25 boys) at other years, when students are also taught by specialist teachers. In other words, design like a secondary school. But none of this comes cheap. The school, which has a roll of 700 boys, from the age of four to 13, charges $18,400 a year for Transition-to-Year 3 students, $19,600 for Years 4-6 and $22,400 for Years 7 and 8.

Perhaps the most significant change for King’s School is its new face — represented by the modernist brick-and-glass north facade, with jutting terracotta fins — which some have described as “unequivocally box-like”. The face of an MLE is a far cry from the school’s landmark 1936 Hanna Block and clock tower, which were demolished to make way for this magnificence — much to the chagrin of a group of old boys and heritage campaigners who wanted it preserved. The march of the MLE waits for no man. As someone murmured to me, “Lucky boys”.