The obituary of Donald Trump, died 2040 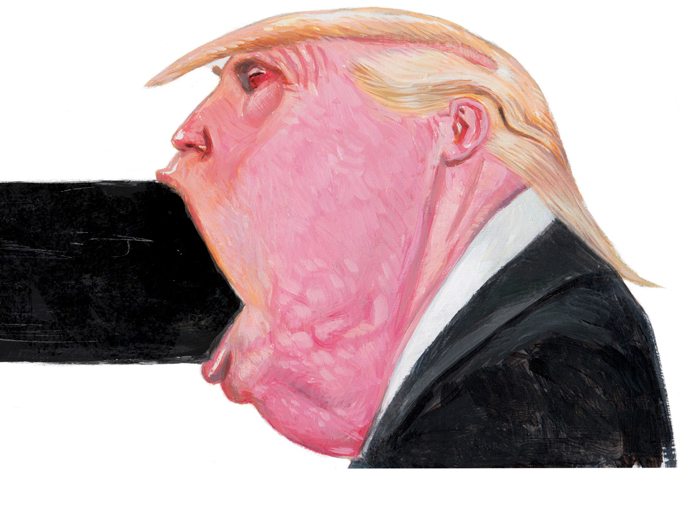 Donald Trump was born in a golden trough, and born to wallow in it. He inherited hundreds of millions of dollars and he shovelled it into gaudy things. Gaudy casinos, gaudy towers, the gaudiest of lifestyles.

He called himself a master of the deal but he was an even greater master of the flop: a mortgage business, an airline business, a university that really wasn’t a university at all, a magazine that flopped, some sort of meat company. A room full of monkeys with typewriters investing his inheritance would not have struggled much to earn a better return.

But he was the most breathtaking human ever to stand upon this Earth. You only had to ask him. He was all over the media. No one had seen anything quite like it. Americans began to wonder if the secret to success was to be a complete pig.

He looked around for someone to sue. A researcher said, “How about New Zealand?”

Sooner or later it would occur to him to run for President. Sooner or later America would lose its way so badly that this would sound like a good idea.

The campaign was not pretty. He sprayed bile all over the walls and carpets of America and called it “plain talking”. He had a roll call of people he hated. He stoked irrational fear of Islam. He embraced irrational thinking. He was, for reasons the world couldn’t quite absorb, elected President.

It was a relatively short nightmare. Financial markets had been on life support for years. Now they convulsed. “The Donald will save us,” people said, “he’s a business genius.” But he could not save them, because he was not.

As markets crashed, he did what he’d always done. He looked around for someone to blame and someone to sue. A researcher said, “How about New Zealand?” When little New Zealand made its bid for a UN Security Council seat, it had made promises. Trump waved his smoking document. “They said if we put them on the Security Council, they’d try to make the world a better place. Take a look. Does this look better to you? We’re suing them and trust me, they’ll pay big.”

“Yeah, maybe,” said McCully. “But I’ve found when this sort of thing happens, it’s best to give them a farm anyway.”

Trump, facing impeachment and bankruptcy, had his escape hatch. And the deeds to Crafar Farms.

He arrived here with slumped shoulders, but to his delight he discovered our dairy industry was a thing of beauty. People were buying and selling farms for ridiculous amounts of money that had nothing to do with what they could earn, propped up by mountains and mountains of debt. He was home.

He bought every dairy farm in the country. Being broke was no obstacle. He borrowed trillions from Saudi Arabia.

These Muslims, he found, were not so bad. They knew how to shut people up, they treated their women like chattels, they didn’t take any crap, they made terrific investment partners.

If he’d only kept his hands off their chattels, he might never have found himself buried up to his neck in silage, facing angry investors and a pile of rocks.

“I know people don’t like Waikato sharia law much,” said President Key, “and I’ll miss playing golf with Donald, but you’ve got to be realistic. Murray said they might sue us if we didn’t let them.”

Article first published in the July 2016 issue of Metro. Illustration by Daron Parton.