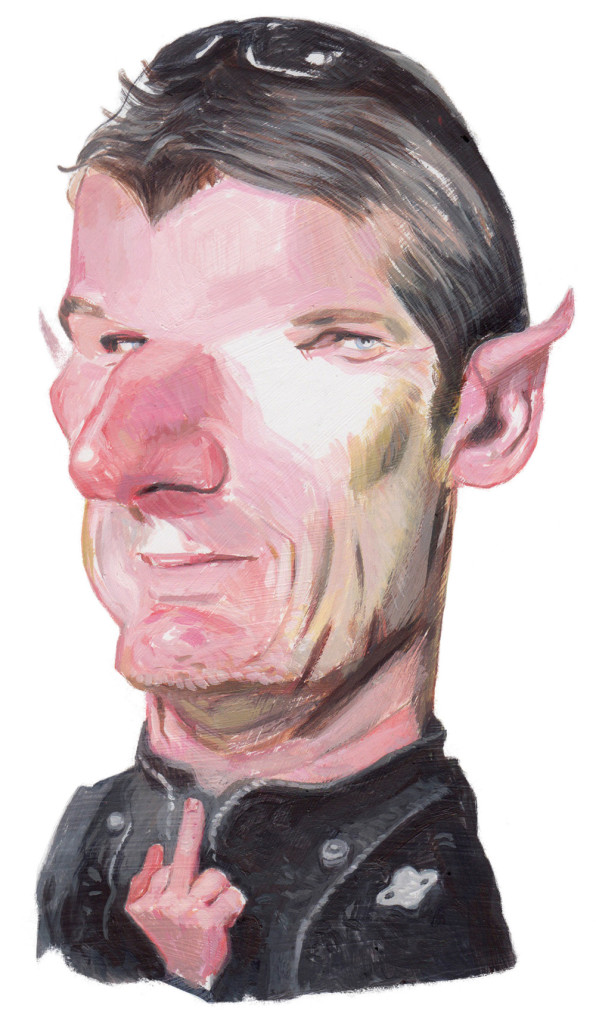 This story was first published in the April 2015 issue of Metro. Illustration by Daron Parton.

Legendary space cowboy Dean Barker has gone missing somewhere on the far side of Uranus. He was 94.

Yachting made him wealthy, famous and miserable. He won his first international yachting regatta when he was three and by the age of 12 he had won every great trophy in the world with the word “yacht” on it.

Barker was at the helm in the final winning race to defend the America’s Cup in 2000. “One day, son,” his boss, Russell Coutts, told him, “all this will be yours.” Barker was so ecstatic, so thrilled, so exultant, he allowed himself a faint upturned curl of a smile.

Barker would soon find that “all this” was a vale of tears, an endless trail of demanding wealthy sponsors and years and years of stress, chasing the America’s Cup from one glittering harbour to another.

Try as he might, there always seemed to be that one competitor sailing a faster boat, hiring more skilful people. The underhandedness was almost more than the nation could bear. At times, Barker just had to let it all go and frown a little.

He gave it his all, but after a short decade and a half culminating in the greatest choke in world sporting history (or a bit of bad luck, depending on who you asked) and still no trophy in the cabinet, Barker was out.

The nation felt dreadful for him, quietly putting the Cricket World Cup on mute during drinks breaks to worry what might become of him and his glamorous family and their various houses and investments.

He drifted for a time, a hired sailing gun for various billionaires, but his heart was no longer in it. He thought about buying a New World supermarket as other retired sports stars had done, starting out in the fruit and veg section in a short-sleeved shirt and tie and working his way up, but he decided in the end it would be simpler just to buy the whole chain.

It was a good earner, but dull, and when Richard Branson rang with an interesting offer, he almost raised his voice to accept.

The ultra-wealthy had acquired a new plaything: spaceships. Would Dean be interested in racing one? Would he? “Beam me up, Richard,” he said, attempting a small joke. He had to spend the next five minutes reassuring Branson he’d rung the right number.

Soon they were all out there, all the big names — Russell Coutts, Jimmy Spittle, that guy from Luna Rossa — all pushing their space yachts to the limit, all taking each other to court.

Space yachting was a massive ratings success. It was the ultimate test of courage and extreme wealth. Just as they did with Formula One racing, people professed to admire the pilots’ technique but what they actually loved was the possibility that someone would crash out of the race and hurtle into the darkness. In space, with 40 cameras on you, everybody could hear you scream. To their credit, people generally felt a bit bad afterwards, except when it happened to Larry Ellison.

Barker adapted swiftly to racing in zero gravity. In space, he found his Spock-like qualities made him the one to beat. He could spin a space yacht like no one else, he could do acrobatics with his eyes closed; nothing seemed to faze him.

Only one space yachtsman could still best him, and that was Russell Coutts. Playing up to the spectators, Coutts would foment happy mischief in all kinds of ways. Turbo boosters would mysteriously misfire, helmets would go missing, you would find yourself being steered towards a comet.

Barker almost always retained his impassive Spock face, except for the day he found himself 13 light years from home with sugar in the fuel tank.

“It’ll be Coutts again,” the audience heard him say. “That guy is starting to piss me off a bit.”