Tae Lee is a tattoo artist with something to prove

Lee (aka Okidtattoo) is out to prove that tattooing can be inclusive, boundary-breaking and a whole lot of fun — if she does it on her own terms.

When Tae Lee, 18 years old, told her mother she was getting a tattoo, her mum advised her to consider the armpit or head, where no one could see it. Some part of that principle must have stuck, because almost none of her 35-plus tattoos are visible. “People never think I’m a tattooist,” she laughs.

It wouldn’t take anyone too long to realise, though, because Lee has an earnest love for tattooing that’s infectious. I finish talking to her by promising to book in for a tattoo of Buttercup from The Powerpuff Girls. It’s the exact genre Lee is known for: nostalgic nods to symbols of pop culture in vibrant colour — Pokémon, The Simpsons, Wes Anderson’s The Fantastic Mr. Fox. They’re joyful, upbeat and irreverent. After years of black ink work, her style has evolved out of a love for colouring-in books, cartoons, and sense of fun. “I’m sorry, but black is boring,” she half-jokes.

Lee started trying to become a tattooist at 21, adrift after aborted attempts at studying early childhood education and the culinary arts. She flew to South Korea in 2015 to learn how to tattoo, despite the fact, funnily enough, that it’s illegal to be a tattooist there, though she didn’t know it at the time. Apprenticeships, the most common way people make it into the industry, were inaccessible because the studios were asking for big money — perhaps because tattooists in Korea could easily run into trouble, serving jail time — and she didn’t have the right visa to get a job, anyway. She ended up just buying a machine to start tattooing on herself, stealthily sneaking in questions to the artists she was getting ink from.

After arriving back in Aotearoa, Lee got an apprenticeship at Otautahi Tattoo. The prospect of working in colour initially made her nervous. “I started tattooing, like, bird silhouettes and little quotes and cute stuff on people. All my mentors that I’ve had scared the shit out of me about colour,” she says. There are technical differences between black work and colour, she explains; there’s a lot of pigment in colour and the ink is thicker, too.

It was only two and a half years later, when she moved to Seventh Day Studio, that Lee really started with colour. It differentiated her from the other artists there, in a big way. Opened by Tritoan Ly, Seventh Day was synonymous with fine-line florals and a delicacy which had been popping off on Instagram; the trend was inescapable, even for people who had no interest in tattoos. 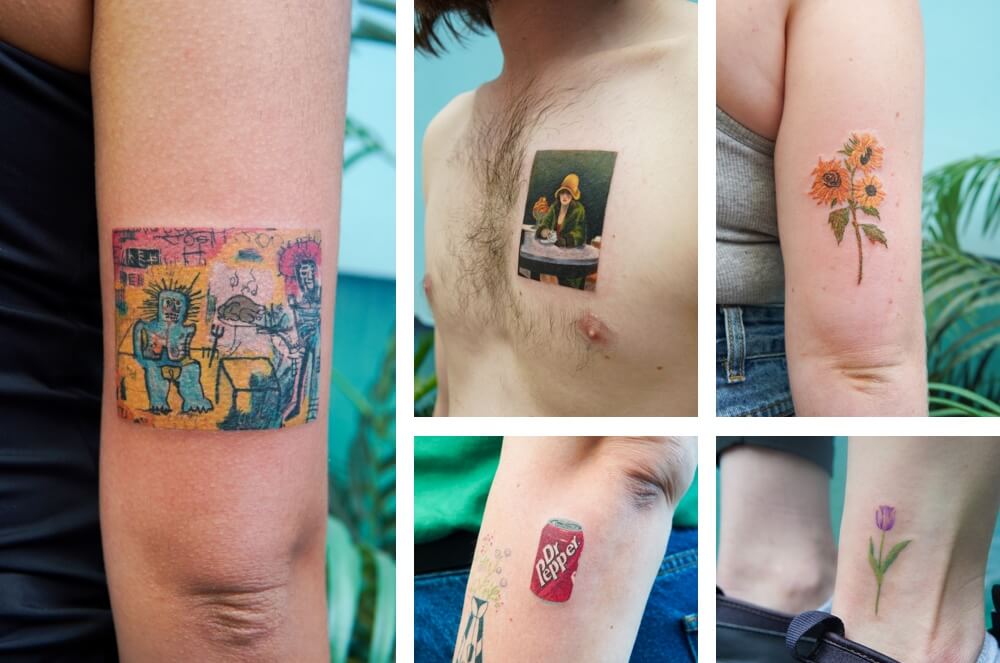 A sample of Tae Lee’s work

Social media plays a huge role in tattooing subculture. Instagram in particular is vital to tattooists — it’s where they attract most of their work. But, social media also exacerbates issues already pervasive in the tattooing industry, and elsewhere. “There’s this big myth that people of colour can’t get colour tattoos,” she says. “I think that’s bullshit, honestly. It’s going to look different, maybe, but you just have to work with it — make the red a little lighter, or a little darker.”

This misconception, like all myths, plays itself out regularly — people with dark skin are commonly turned away from studios, especially for colour work. “When I was learning to tattoo, my mentors were like, ‘Just say no if someone with darker skin wants colour, because you’re going to fuck it up anyway,’” she recalls. Overseas the studio Bang Bang in New York was caught desaturating darker skin to blend in with the sea of white on its Instagram feed, claiming that “darker skin is hard to photograph.” Lee is aware that she could be doing better — that sea of white skin covers to her Instagram page, too — but thinks the perception that only a certain type of person can get colour needs to change. “Come and get a tattoo from me,” she shouts into the phone that’s recording our interview.

Gender, and the presentation of it, is another matter altogether, with the sexualisation of women’s bodies of particular concern. Some tattoo artists request headshots from their clients, turning them away if they don’t meet aesthetic standards. And while many women do consent up front to having their photos taken, Lee pushes that it’s never too late to say no. “I met a few tattoo artists during my apprenticeship who tried to take advantage of me because I’m an Asian woman, I feel really angry about how I didn’t speak up at the time, because I was so used to it. I thought I was okay, but I wasn’t.”

Lee has now left Seventh Day, starting her own studio with Jay Bhana, also ex-Seventh Day, called Colours Studio. More art collective than tattoo studio, Lee says as two Asian artists they “have something to prove.” Projects will explore different forms of art and be more experimental, incorporating interaction with the public. In trying to explain how they differ from other tattoo studios, Lee falters. “I can feel it in here,” she says, pointing at her chest, “but it’s just not coming out.”

Later, in an email, she writes, “Jay and I have both been victims of racism our entire lives, and through Colours, we’re wanting to break the boundaries of race and gender.” Hopefully, she says, it’ll be different to anything else that’s come before.