Taking on the world, one tulip at a time.

“There’s Hoony,” my friend said into my ear. I watched as a tall Korean guy waltzed into the packed crowd, receiving pats on the back from passers-by. People swarmed around him. “Groupies,” my friend commented.

I was at the Atomic Latte Art Throwdown, an event I hadn’t known existed until two hours prior. A lone DJ spun quietly in the corner, free bottles of Brothers Beer were being opened near the back of the room, and, right at the front, two baristas were hunched over their cups. A camera above them captured intricate pours, projecting them on the wall so on-lookers could see exactly what they were up to. Hoony Chae, the current reigning New Zealand Latte Art Champion and possessor-of-latte-art-groupies, was in the semi-finals against Benji Taiaroa. It was deter- mined by random draw that they’d have to evoke a seahorse in a tulip cup.

“Oooooh,” the crowd intoned, intrigued by the smallness of the tulip, and the relative difficulty of the seahorse. The appeal of these throwdowns became apparent to me as the completed cups appeared on the wall, side by side, so the three judges could decide on the winner and the audience could do their own speculation, weighing up the quality of the baristas’ work. The seahorse with the distinct tail, or the seahorse with better-placed dots?

Taiaroa won and went on to win the overall event. Despite being New Zealand’s Latte Art Champion, Chae to his dismay is also known for something else: never winning a throwdown.

“Firstly, it depends on the judges,” Chae told me later. “I can’t complain. I just need to accept that those were the results. My one was clearer on the wiggle. It was much clearer than Benji’s. But his head was really clean. And I guess most of what you can recognise of the seahorse is from the face, so …”

The world of latte art is strange and fascinating. As something to look at, it’s generally been perceived as the domain of white girls on Instagram (as mentioned in comedian Bo Burnham’s song ‘White Woman’s Instagram’ from his recent Netflix special and album Inside) and is therefore regarded as somewhat too cutesy or passé. It seems very uncool, vaguely occupying the same cultural space as a ‘live, laugh, love’ wall decal. But as an artform to make, it’s been dominated by male baristas (to my knowledge, only two women entered the Atomic Latte Art Throwdown), and a serious, sports-like culture has been created around it, with a small community of people who all know each other. “If there’s a Hamilton throwdown, a Taupō throwdown, I’ll drive down,” Chae told me.

Chae, the head barista at Mojo Coffee, has won two National Latte Art Championships so far, in 2019 and 2020. The Championships are more reliant on creativity, consistency, presentation and skill than the throwdowns are. And they’re generally less alcohol-fuelled, too. “Championships are about how many points you earned over the day, across the preliminary and final rounds,” Chae told me. There are four judges. One who will follow your every movement (how you tamp your coffee grounds, for example, affects the points you can accrue). Two are visual judges who stand, watch and listen to what the contestant says. The head judge stands at the back, calibrating the scores.

“On the stage, I have to interact with the judges, pre- tending I’m serving these patterns to customers, explaining where I got the inspiration from and what techniques went into the specific pattern,” Chae said. “They have rules and regulations that are really, really important. The book is very thick.” Chae had to submit three patterns, linking them together to form a coherent story which would then be told over a mic hooked up to him during the presentation. The first time he won, in 2018, he talked about his childhood in South Korea, pouring latte art which depicted a rabbit, honeybee and squirrel. “I used to go to parks in South Korea to meet my animal friends, and these are my childhood memories I’d like to share with you, judges. I hope you enjoy my speech. Thanks.”

Chae only started drinking coffee after high school (he attended AUT and majored in hospitality, but dropped out before he completed the degree). He then worked full- time at Esquires and had no inkling that coffee was going to become something much more permanent in his life. But after completing a part-time internship in South Korea at Ediya Coffee, a chain with over 3000 franchises, he real- ised it was the right industry for him. He was hired at Mojo when he returned to New Zealand in 2015. “I was thinking I’d work there for six months, maybe, then open a café,” he mused. Chase has now been at Mojo for six years. “I think it’s going to be my future job, too — as a barista, or a personal latte art coach.”

It initially strikes me as funny that someone might need a personal latte art coach, but after talking to Chae, I don’t know how anyone would be able to learn the skill otherwise. Like many other niche special interests, there’s an inherent nerdiness to it that you need to fully lean into to get the most out of it. For example, Chae and most other latte art competitors bring their own milk jugs to pour out of. Chae makes them himself, buying plain jugs and using pliers to modify the spout to better control the flow of the milk and foam. Usually, competition organisers will announce ahead of time what milk sponsor is being used, so baristas can practise with that specifically, since the fat and protein content will make a difference.

“Normally I start practising three months before a competition. I plan for the [National] Championships the year before — pick a concept, look for what kind of design I can do, or theme.” Chae practises for about two to two and a half hours at a time, using up milk and coffee beans which, thankfully, Mojo allows him free of cost.

“I practise, then have one day rest so my muscles can recover, then practice again,” he said. “It’s like in sports. When you play golf, for example, your swing must always be the same in order to get the swing to go straight. It’s the same with latte art.” The day we talked, Chae told me he had a cramp in his shoulder — a very common occurrence. “My neck’s firm. It’s hard to move.” 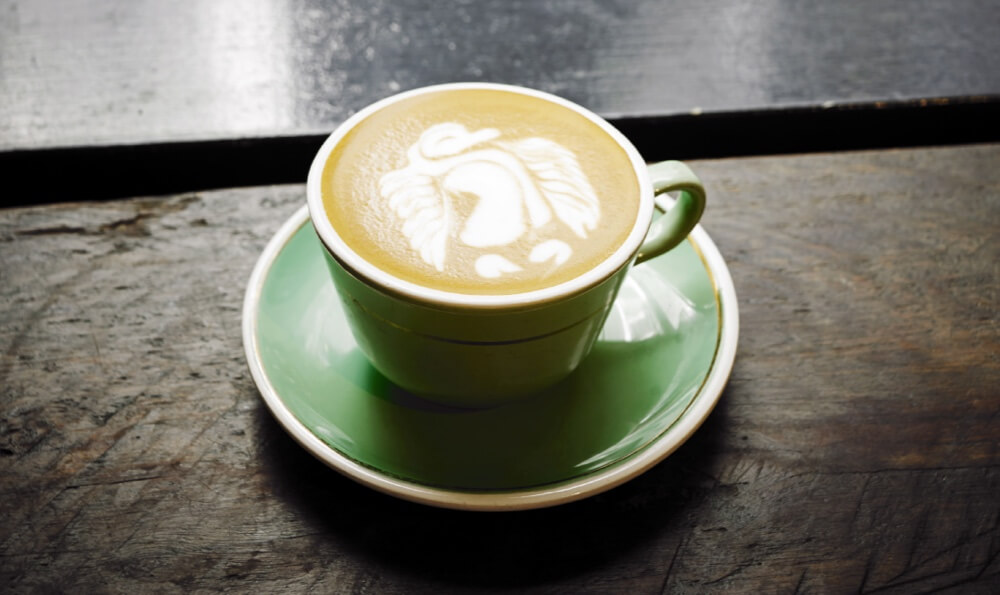 What it’s all about

While Chae admits he “sometimes” gets sick of coffee, he says he shies away from saying this out loud, because he knows that kind of attitude would be antithetical to achieving his current goal. Having missed out on the World Championship this year due to the Covid-19 pandemic, he’s keen to get to the next one. “Sports are like this,” he says. “Once you stop, you’re only going down. You’re not going to come back. So I can either maximise my skills now, and if I choose to go higher, I can’t stop. The title makes me want to keep going, because you don’t want to lose.”

Chae first entered the National Latte Art Championships in 2017, where he came third. He remembers leaving it feeling a little cocky — like he had the latte art world in the palm of his hand. “I thought … this is easy.” The year after, however, Chae made a mistake in the final stage and came fourth. “At the final stage, one of my shots wasn’t going into the cup, and so there was only a quarter strength of espresso. It was really hard to pour with that.” Once your mental attention breaks, he said, you start to shake more and more. That shaking is then amplified by the mic you’re hooked up to; every movement, every breath, every wiggle of your hand feels seismic and is heard by everyone in the room. That’s why, Chae says, he practises as much as he does. “Practice makes perfect. Practice makes the confidence.”

Near the end of our chat together, Chae pulls up his Instagram, keen to explain the difference in skill between the baristas in New Zealand, and those on the world stage. When Chae went to the Worlds in Berlin in 2019, he was ranked 22 of 41 baristas and didn’t make it into the semi-finals. His score was 338.5; in that round, the number one, Liu Guoqiang of China, scored 463.0. His saved posts on the social media platform are all latte art — videos of pours and spectacularly complex designs. He wants to tell me about a Thai barista, Arnon Thitiprasert, who “revolutionised” the world latte art scene in 2017 when he presented a new skill: drawing with the foam left over in the milk jug. “You see, these are just basic pours,” he says. “Wiggle, wiggle. Tulip, tulip, slow pour, then rose, bottom rosetta, bottom rosetta.” It sounds exactly like a commentator in a skateboarding competition calling out the tricks as the skater kicks and flips. “These swans, they’re just rosetta, tulip-based. There’s no drawing.” The difference with using the foam, he says, is that you can use your drawing skills after running out of the milk. It allows the artist to create shadow, or what looks like 3D patterns. That still counts as a “free pour”. Etching, however, occurs after the pour, when you use a tool in order to manipulate the art. Food colouring can be added after the fact to further jazz it up.

At this point, I comment, it’s so incredibly removed from coffee-as-a-drink that it’s not really about the coffee at all. “Yeah,” Chae says dismissively, “they don’t taste the coffee.”