Nobody’s perfect, but some imperfections deserve recognition for truly lowering the bar. Our annual celebration of Dubious Achievements salutes only the crème de la crème of stupidity, ineptitude and gobsmacking dubiosity.

By the Metro society writers. This article was first published in the December 2015 issue of Metro. Illustration: Toby Morris.

The US Marine Corps Medal for destroying the TV3 village in order to save it is awarded to MediaWorks generals Mark Weldon and Julie Christie.

Those who love the smell of napalm will have enjoyed developments at TV3, with resurgent guerrilla outfit Campbell Live among the casualties of a Weldon- and Christie-led campaign. Is carpet-bombing by reality TV the answer? Just a minute… we’ve got Mike McRoberts on a live feed… in his camo gear, natch… he’s up-river with the latest ratings… Mike! Can you hear us, Mike? (McRoberts: “The horror… the horror…”) Oh, shit. Let’s cross to Paul and Hilary cracking themselves up about something.

The Look-At-Me-Look-At-Me Spotlight for calling silly press conferences goes to Colin Craig and the Conservatives.

We get it, Colin. Your party is a mess. Any gains made in the election have been lost amid murky internal recrimination. We have no interest in traipsing off to the bloody Spencer on Byron or anywhere else to see you and/or your wife take another turn at the lectern. It’s got so we don’t even care what your “inappropriate behaviour” was, and we usually love that sort of thing

We were dead keen to see Cameron “Whale Oil” Slater smacked around a charity boxing ring, just not by someone lucky to recover from a head injury. Another one for the bulging “Jesse’s Mistakes” file, but at least he’s stayed away from those appalling heatpump ads. Stephen Fleming and Nathan Astle? Give yourselves an uppercut!

The Tony Veitch Gallantry Award goes to The Edge’s Dom Harvey for supreme vileness in a broadcast medium. 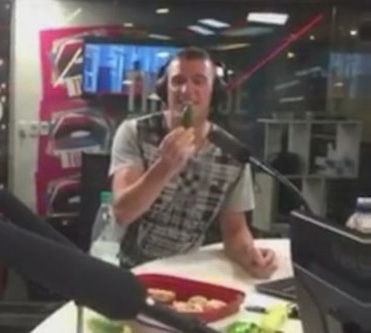 Which was worse? The crotch-shot screengrab of Chrystal Chenery posted online or the on-air stunt in which young women were asked to shove cucumbers in their mouths? We can almost hear the mucoid sniggering among Harvey’s audience of mouth-breathers. That’s a result, right, Dom? If only people who hear about your jolly japes didn’t feel like scrubbing down with disinfectant.

More from the series: