A kind of love song

This article was first published in the November 2015 issue of Metro. Photo: Karolina Grabowska.

It’s not a flattering hat, even seen from a distance across the park. But it is a beacon of sorts, emitting faint flashes of colour among all the green.

She does the same set of exercises every day. The slowest, smallest, most gentle movements, the hat bobbing ever so slightly each time she takes another tiny step. Exercise in miniature.

Beyond the band rotunda, beyond Albert Park, the city surges and snarls. It gets all tangled up in itself, in the godforsakenfriggingtraffic. Once again, Auckland is late for work.

Hardly news, is it? Everyone knows the traffic is enough to drive you nuts. Every day a motorway. Staring down the barrel of the fight for a car park. Second guessing the parking wardens and the towies.

All the fuming, all the frustration. Why the hell would we fight to get downtown?

Walk past the corner of Victoria and Queen and pray that the really annoying man who warbles about Jesus has taken the day off. The man’s wife always looks so wretched, she can’t possibly have seen the light.

But the homeless men are here, flickering along the footpaths like wraiths.

Beyond the park, the city ceases snarling, soothed by its own hum. It’s time to rejoin it.

The promise of Auckland’s heart. Not broken, though the poor sods who were beckoned in to live in the old Whitcoulls building might beg to differ. Now they get to savour city life, all of its rattle and hum, in their apartments above the building site which will be the new Farmers. Perhaps the building’s residents have a collective recurring nightmare, in which a bearded bloke winks repeatedly at them as if to say, I told you so, suckers.

There is beauty, too, especially in the past: the Dilworth building; the Guardian Trust façade; the Town Hall; the Civic. Look up. The city’s backstory lives here.

It’s just a short walk up the hill to Albert Park. There you might see a kingfisher, dancing across the grass. A kingfisher! In the middle of Auckland! So they haven’t all retired to Waiheke.

And over there, five scraggly young men with their trackie daks hiked up to their knees. They’re stringing up a rope, down low, between two trees. Trainee tightrope walkers? Of course.

They take turns wobbling along the rope, grasping it between their toes while the others watch intently, hoping to learn the secrets of grasping a rope with their toes. One by one, they fall off.

In the amphitheatre behind the art gallery, a woman in a blue dress practises tango steps with a thin white elderly duke. He wears a smart suit but his limp grey ponytail puts paid to the suggestion of elegance. Pity.

The park is burdened by spring. Magnolias make way for cornflowers and camellias and cherry blossom. At the fountain, a boy is laughing as he reaches for the bubbles melting on top of the water. As always, Queen Victoria does not approve, frowning on her plinth.

The little round hat bobs in the band rotunda.

When night comes, furtive tokers tuck themselves under the wings of the gnarliest trees, beyond the yellow spell cast by lamps surely imported from Narnia.

Women walking alone are shooed out by the dark: yet another public space becomes unsafe.

The lone and eternally lonely morepork wakes to another long night. The homeless men come to roost in the band rotunda. Home tonight. Hush now.

Beyond the park, the city ceases snarling, soothed by its own hum. It’s time to rejoin it.

Return to Queen St and look down it as far as you can. Because even if you can’t see it, you will remember the ocean is right there, gleaming like a promise. 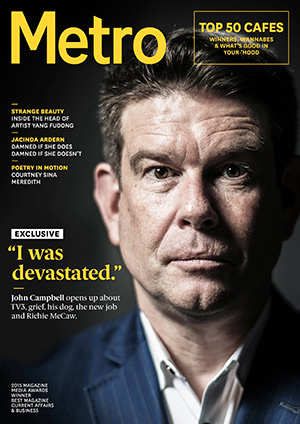 The November issue of Metro is on sale now.