Inventor and University of Auckland Associate Professor Suranga Nanayakkara is on a mission to make our lives better with intuitive technology. 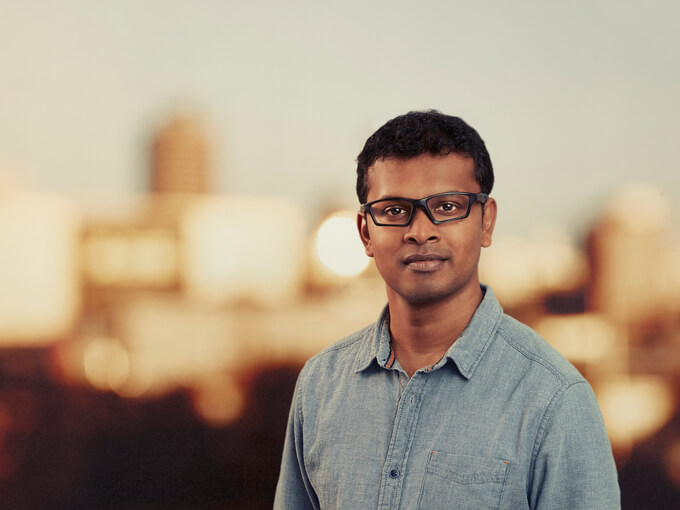 Inventor Suranga Nanayakkara is on a mission to make our lives better with intuitive technology.

Most people won’t achieve in a lifetime even a lick of what 37-year-old Sri Lankan-born inventor Suranga Nanayakkara has already accomplished. An over-achiever since childhood, this year alone he’s joined the bioengineering faculty at the University of Auckland as an associate professor, had one of his inventions recognised as a world-changing idea, and will be talking about his efforts to humanise technology as part of the “Raising the Bar” programme.

Nanayakkara says he realised he was quite smart when he got to secondary school: “[There is] this supercompetitive exam which determines who goes to university and who doesn’t. Given the number of students who take it, it’s a major hurdle for university entrance,” he explains. Nanayakkara finished fifth out of 200,000 students.

On a path to a career in engineering, the logical choice would have been to apply to the best technical school in Sri Lanka, which happened to be 10 minutes from his home. Only 100 people are admitted each year, so it’s a big deal to get a place. But, despite not speaking any English, Nanayakkara was keen to study abroad.

A chance sighting of a newspaper advertisement offering study loans for undergraduate students at the National University of Singapore (NUS) changed his life. The scheme would provide full tuition and some living costs, to be paid back over 20 years on completion of the student’s studies.

He left for Singapore with US$1000 in his pocket from his mother, who had become the family’s main breadwinner as well as housekeeper and handyman after Nanayakkara’s father fell from a bus and was paralysed in 1997.

Nanayakkara arrived to find NUS offered a scholarship programme that he was eligible for, too, but the application process included writing a supporting essay in English. Six thousand people applied. “My friends were writing about new tech, new research, all sorts of things,” he explains. In broken English he told the examiners his main responsibility was “to do my studies at my level best and make the most use of my mother’s effort, and that was it”. He was the only Sri Lankan to win a full scholarship. “I thought, now everything is given, the least I can do is make the most of the opportunity.”

The inspiration for Nanayakkara’s computer-human interface work — a lifetime research project which tries to augment the human experience by making technology more intuitive — began in Singapore. On arrival, he was presented with a laptop, something he’d never used before. He soon saw a problem — the laptop wasn’t intuitive. Even its own parts didn’t work cohesively together: you have to connect a cord to the wall, then to the laptop. Any additional hardware has to be connected separately again.

“It struck me that maybe the reason it was difficult for me to learn to use a computer wasn’t me, it was the technology,” he explains. “I thought maybe the technology needs to be redesigned so we don’t feel disabled by it.”

Out of this frustration, Nanayakkara and a friend created a copy-paste tool, which allows users to lift information — a phone number, for example — from one device and paste it into another with the touch of a screen. “Rather than looking it up and having to type each number one at a time,” explains Nanayakkara, “I just take it as if it were a physical object and drop it in my phone”. It works by sending the highlighted information to the user’s cloud and downloading it to another device with another touch.

It’s so smart that Samsung bought the patent, developed it into an app called Samsung Flow, and hired Nanayakkara’s friend as one of the company’s vice presidents.

Finger Reader, a device that assists the visually impaired, is another of Nanayakkara’s inventions, which he devised after noticing a fellow university student, who was blind, was struggling to study.

His research group has been working on Finger Reader since 2012. Over the years, they’ve refined what was a fairly cumbersome device into something slicker and easier to use: the user wears a small ring on their index finger and a set of wireless headphones. When they want to “see”, they point to whatever is in front of them and press a button on the ring. A camera in the headphones captures the text, which the device then reads back to the user.

Finger Reader, which Nanayakkara first developed at the Massachusetts Institute of Technology in the United States, this year made the final round of judging in Fast Company magazine’s World-Changing Ideas Awards.

He and his team are continuing to refine the device, in a bid to make it accessible to all visually-impaired people.

And he’s taking his ideas about technology to the public as part of Raising the Bar, a popular annual programme of talks which sees University of Auckland academics speak about their research in bars around the central city.

Nanayakkara’s is one of 20 talks being given at 10 venues, all on August 28. He is speaking at the Birdcage in Freemans Bay on “Humanity and the machine: Is technology going to make our lives better?”

We can’t think of anyone better qualified to tackle the topic.

Suranga Nanayakkara at Raising the Bar, The Birdcage Tavern, August 28.