An up-and-down career journey has led to a dream leading role — and a more joyful approach to the craft of acting.

“I went into this interview thinking, we’re going to talk about the same things we always talk about with projects like this… you know, diversity and representation,” Kat Tsz Hung* says, mid-way through our chat together. As two Chinese women, it’s familiar territory, and there’s an exhausting déjà vu that accompanies it. But she was right; we’d already covered the well-trodden immigrant themes of inclusion, internalised racism and racial stereotypes. It all seemed unavoidable when talking about a play titled Single Asian Female. “But at the same time,” Tsz Hung continues, “why have we not seen a play like this on stage?”

You may recognise Tsz Hung, 39, from the front cover of Auckland Theatre Company’s new programme wearing a bright yellow coat in front of a backdrop of pink-and-orange parasols, the kind you vaguely recognise as “Oriental”. Further into the programme, she stands hand on hips staring straight into the camera, with a gigantic Chinese takeaway box behind her. A fortune cookie with a message spools out from it: “Good times ahead.”

“At the photoshoot, we discussed if that was okay or not,” Tsz Hung admits. The character she plays, Pearl Wong, is an immigrant mother with two daughters trying to keep her restaurant, Golden Phoenix, afloat. “My family has owned two takeaways, so it’s been my experience. But then it’s funny when you have to portray a story like this on stage. It goes through my mind, you know: Pearl’s an immigrant, hmm. She’s from Hong Kong, so her English isn’t that fluent. How does it resonate with me? Is it a stereotype? But then, at the same time, it’s frustrating I have to question that. Why can’t we just tell the stories — everyone’s stories? My dad spoke in broken English, and so did my mum.”

Having an actor who doesn’t normally speak in broken English use an accent has been controversial in the past, most recently with Hong Chau for her Golden Globe-nominated role in Downsizing. Reviews called her character “an icky, racist caricature”. The actress later referred to her performance as “heightened”. It’s a thorny subject, one which mostly boils down to the treatment: is Pearl more than, as one white Australian reviewer suggested, a “tiger lady”? For Tsz Hung the answer is yes. “I think that term, ‘tiger lady’, is a bit freely used,” she says, wryly. “If you’re Asian and have a bit of grit or sass, then you’re a tiger lady. In that case, my mum’s one, too. But I don’t view her like that. Is that the Western perspective?”

Single Asian Female itself is by a Chinese-Australian writer, Michelle Law, who wrote the script around that exact idea of prescriptive labels. Essentially, what does it mean to be single, Asian and female? But also, what does it mean to be perceived that way? The play will be slightly adapted to the New Zealand context (we don’t, for example, have Pauline Hanson, the Australian leader of One Nation who once said Australia was being “swamped by Asians”, but I suggest there are a couple of New Zealand politicians who could slot into that role nicely), and ATC are working in collaboration with Proudly Asian Theatre, a New Zealand-based organisation, on the production. But it’s ultimately a Chinese story. “I could see my dad in the character, and my mum, and myself,” Tsz Hung says. “It’s quite a dynamic play, but very intimate as well. I found the daughter’s storyline of internal racism interesting, because I’ve internalised a lot of racism myself, especially being an actor. I can’t be myself, because I’m experiencing what other people view of me. So you don’t even know you have these blocks inside yourself until it comes up in the audition room, or you get a script where it hits you, like, ‘Oh, this is a stereotype I’m going to have to play.’” 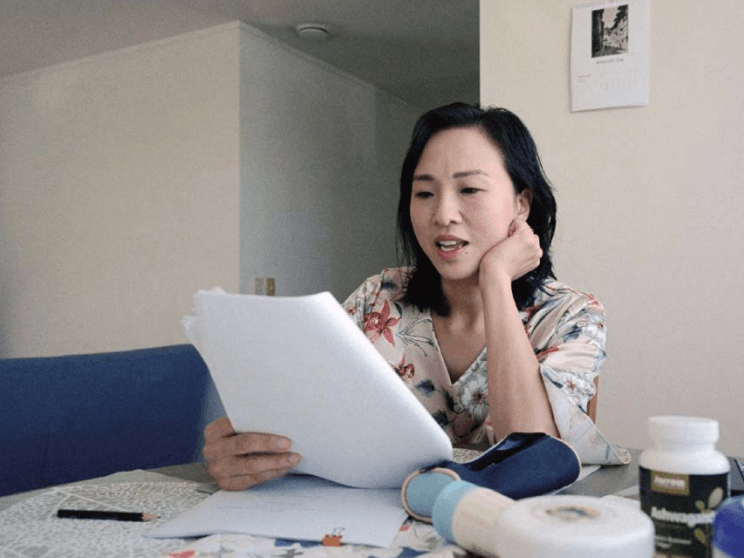 Tsz Hung is an actor who enjoys a lower profile. Naturally more reserved, it’s taken her years to arrive at this level of self-assuredness. “I did two years at New Zealand Performing Arts, and then I went to Toi Whakaari, so I did five years in total,” she says. “I think it was because I just didn’t have the confidence. I needed confidence.” She left drama school thinking she’d work mostly in theatre, but fell more into screen roles, most recently as Corinne Burford in the teen drama Mystic.

Through her career, Tsz Hung has dipped in and out of acting, taking breaks as the grind, especially of auditioning, got too much. “A big part of my journey has been learning how to be comfortable with auditioning,” she says. “I love it now, but it’s a whole different beast; I used to be really bad because I was so nervous and awkward. But I’ve got a different approach to acting now; I’m not so technical. I’m just much more intuitive. Before, I lacked the joy.”

There were struggles with being on set, with the ever-present “male energy” and banter. “Sometimes they’ll joke about you, and back then I wasn’t confident enough to say something. You keep letting it happen, and it really hurts, but they don’t know it.” (In comparison, Single Asian Female is a female-led cast, including a female Chinese director, Cassandra Tse.) “Now I always say something.”

It was the long break during Covid that allowed Tsz Hung to recalibrate how she approached acting. “I always thought acting was like air to me. But then I thought… I don’t need it. I’m happy just as I am — I do yoga, I teach children, I have a husband, my dog, family. I realised then it was a choice; I chose to do this. And I realised that was much more powerful and doable and joyful.”

When the script for Single Asian Female landed on her desk, Tsz Hung was actually off the books, taking the time to do her early childhood teacher’s registration. But she knew she’d regret not taking the role. The timing intersected with the year Tsz Hung would turn 40. It’s a particularly significant age for her, as Tsz Hung’s mother passed away from cancer at 40; Tsz Hung herself had cancer when she was 28. “I’m really proud that the day I turn 40, I’m doing a theatre show. I think about her when I play roles like this. I saw her struggle at the takeaway, you know, her encounters with Pākehā people. Back then, it was a lot of ‘ching chong-go-home’.”

Technically, Single Asian Female is a comedy, with lots of karaoke, but it also has a poignancy that burrowed its way into Tsz Hung as she read the script. Moments made her want to cry; moments made her wish she could have seen something like this at a younger age, growing up Chinese in New Zealand. When the play debuted in Australia, reviews came in from white writers who suggested it wasn’t “groundbreaking” but charming, with a “sitcom” feel and structure. This is something that comes up a lot in diaspora discourse. When can we move on from chewing over broad narratives easily digested by the white audience, seen in shows like Fresh Off The Boat? It’s a never-ending, circular conversation.

But perhaps it’s not fair to view it that way: what’s commonplace for one person can be groundbreaking for another. The theatre, for example, is a whole different ball game to screen, with arguably higher barriers to access and its own historic significance, especially within a “premier” theatre company like ATC. So, yes, the bare bones of Single Asian Female are familiar to a lot of us. But if we’re speaking strictly factually, it is groundbreaking. Just as when the play debuted in Australia, the fact that there will be three Chinese women in leading roles is a first for ATC, too.

Single Asian Female runs at Auckland Theatre Company from 27 April to 15 May.

*Editor’s note: At the time this issue went to print, Kat’s professional name was Katlyn Wong; it has now been updated.